THE DEVIL IN DALKIN: 4 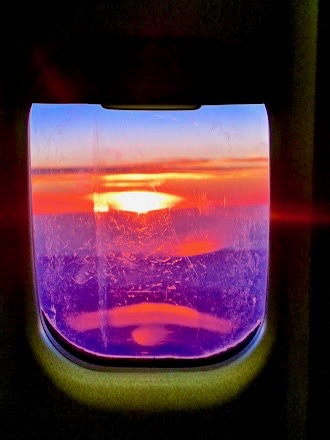 Although sleep is Dalkin's objective, the sleek bar behind him possesses a gravity that won’t quit.  Soon after take-off, Dalkin stools himself, a glass of decent pinot noir.

That's when a throbbing in his lower molar escalates into acute pain.

"That’s a damn shame,” snaps Dalkin.  "Because I got a goddam toothache and we got, what, ten hours to go?"

The barman turn, grabs a bottle of Johnny Walker Black Label and sets it on the bar.  "This we can dispense."

The irony is lost on Dalkin because, by now, the pain from a damaged nerve in his tooth has built into a crescendo.  "So pour it," he hisses.

Dalkin throws back a shot in one gulp.

The barman pours another.

This time, Dalkin allows the amber potion to linger around his molar.  Until it propels the nerve into an excruciating spasm.

Dalkin downs a third and then, feeling hot and feverish, staggers to his chair, reclines and slips out of consciousness...

Looking for me? says a deep voice.

Dalkin opens one eye, looks up.

You cannot see me.

Dalkin opens both eyes, looks both ways at the jetliner's ceiling.  "Fuck-nuts," he mutters and closes them again.

But I am here, at your request.

The seat next to Dalkin's is empty.  And the lady behind him is snoozing with a mask over her eyes and earplugs.

I'm in your tooth, mortal fool.

A burst of pain explodes in Dalkin's jaw.  "Oww!  Fuck-nuts!"

"What the hell is that supposed to mean?"

I do.  Your tooth has become Hell.  My natural habitat.  You wish to meet me?  Hell-o.

It is tonight.  Having fun yet?

Dalkin feels a presence over his right shoulder.  He looks up to see a female flight attendant standing over him.

"Everything okay here?" she asks nervously.

The flight attendant eases herself away.

"Pssst," whispers Dalkin.  "You still there?"

"No, I, owwwwwww!" Dalkin slaps his jaw, grips it with his fingers, tries to massage the pain away.  "Fuck-nuts!"

Now the barman appears at Dalkin's side.  "Here."  He produces two caplets.  "We don't have aspirin, Mr. Willis, but we've taken a vote and decided to give you paracetamol."

"It's an English painkiller," said the barman.  "Works better than aspirin."

"Thanks, chief."  Dalkin washes the caps down with water, re-reclines his seat.

"Not you again," Dalkin whispers, recoiling.

Yes, me again.  Hey, you were the one desirous of an audience.

That's humorous.  You think you get to choose the time and place?  I'm here, tonight, in your tooth.  What they call the pulp.  Let me tell you, it is sheer hell in here. Can you feel my pain?

I have a simple question:  What do you want?

The flight defendant rushes to his side.  "Are you all right, sir?"

Dalkin's face is flushed, radiating heat. "I think I got a fever, burning up…”

The next thing Dalkin hears is an announcement asking if there is a doctor on board.

Then a doctor appears.  He points and shoots a thermometer at Dalkin's forehead, inspects the result: a temperature of 105. He barks instructions to the flight attendants for towels and a bucket of ice.

Dalkin rambles incoherently, thrashing his head around, hollering fuck-nuts every so often.

"What's he saying?" asks the barman.

The doctor applies another ice pack to Dalkin's face  "Something about the devil."  He pauses.  "He's delirious.  Or schizophrenic.  You may want to notify the authorities at Heathrow."

Posted by Robert Eringer at 7:40 AM

Email ThisBlogThis!Share to TwitterShare to FacebookShare to Pinterest
Labels: Devil in Dalkin

THE DEVIL IN DALKIN: 3

Many of the patrons in this busy den of caffeination look up, a few kids point.

That’s because Dalkin looks more like Bruce Willis than Bruce Willis. Especially in this Starbucks, frequented as it is by Dennis Miller, Rob Lowe and Peter Noone.

And there he is, Dennis Miller, dressed in a black track suit, waiting impatiently (as usual), on a latte.

Dalkin grabs a cup of grounds, finds a corner and consults his wristwatch.  Teatime in London, eight time zones away.

He taps a number on his cell phone.

"I know everything about that bloody imposter," replies Crispin.

"I know, I know.  I got weird clients—dumb mutherfucks—what can I say."

"Your prayers, mate," says Crispin.  "Satan will already know you're looking.  Careful. In all likelihood he's standing next to you as we speak."

"It'll know all your vulnerabilities and weaknesses.  If you don't know what you're dealing with, you'd best leave it alone."

"Six-six-six," said Crispin.  "But Satan answers only on Satan's terms."

"If you want to come face to face with Satan, you've got to be prepared to die."

"I'm not scared of the friggin' devil."

"Sounds like a Catch 22," says Dalkin.  "Let's simplify this sucker:  Where is the evil bastard hiding?"

"Hiding?  Not bloody likely.  Look upwards, to the right."

Dalkin complies.  "I don't see nothing but a ceiling."

"I need to meet him, have a chat—see if I can produce him for my client—dumb mutherfuck."

Crispin chuckles.  "The first thing you need to understand is, Satan is not a man with horns."

"The demon inhabits a negative dimension.  It's very ancient.  And very powerful."

How do you find it?"

"You have to find truth first," says Crispin.  "Start telling the truth."

"Good-o. But I mean always, about everything.  Satan hates the truth, runs from it.  Satan preys on lies first, weakness next and young children.  If you don't mind me asking, how much is your client paying you?"

"A thousand a day, expenses."

"It's not enough, mate."  Crispin chuckles.  "You're the dumb mutherfuck, not your client. If Satan thinks you're serious, it'll start by taking out a few of your relatives, see how you feel about that."

Dalkin has a thought.  "Would I find him at an exorcism?"

"Yes," says Crispin.  "Demonic possession is one way to come face to face with the devil.  If you could persuade an exorcist to take you along.  Unlikely, because they've come up against Satan before and they'd be concerned for your safety.”

"Yes, mate," says Crispin.  "The moment you walk into the room, Satan will know every embarrassing detail of your life—and use it against you.  Exorcists are trained.  They know how to shield themselves psychologically to outwit the old sausage jockey.  Also, they use Latin.  The devil hates Latin."

"The devil knows you're looking, mate," says Crispin.  "If it didn't know before, it knows now.  Just keep your mind open to everything around you and..."

Lucky's bar-and-grill is quiet at five o'clock aside from T.C. Boyle, the novelist, dipping into mixed nuts and washing them down with chardonnay.

Jeff Dalkin nibbles a drenched olive, half-sitting, half-standing at the bar, looking at fancy wheels cars through a window framing a view of the Santa Ynez mountains.

A short, barrel-shaped figure swaggers into the bar.  He has a full head of gray hair—two-toned, really, silver and white—and a four-day growth that clings to his ruddy face like mold.  He catches Dalkin's eye.  "Dalkin?"

"I heard you look like Bruce Willis," says Arthur Toady. "But this is uncanny."

"My tips. Never more than a quarter whatever the service. Waiters and valets inform the tabloids and they report he's a cheap sonofabitch."

T.C. Boyle glances over.  "You're not Bruce Willis?" he says in disbelief.

Dalkin shrugs.  "It's not like that," says Dalkin.  "Bruce Willis—wanking willie—is not me."

The red-sneakered Boyle is already percolating a new short story.

"Drink?" Dalkin stands, points with his thumb at a high-top in the corner.

"Soda water."   From his pocket Toady produces a packet, tears it open and surreptitiously stirs white powder into his water when it arrives.  "Hornet juice," he whispers.  "It's a refined version of what hornets feed their babies.  Illegal here.  I had sneak it in from Japan."

Toady shakes his head.  "It's been two weeks.  I'm still waiting for it to cut in."  He pauses.  "Where are you with my investigation?"

"So far, my best lead is over there."

"Really?' This puzzles Dalkin, having deduced Crispin to be a nutcase. "Why?"

"British history goes way back," said Toady.  "And so does Satan."

Dalkin sips a martini.  "I hope you don't mind me asking..."

"Uh, I'm just curious why you want me to find Satan."

You want to know why I've chosen you?"

"Not what I asked. But now you mention it, why did you call me?"

"I'm a secretive man," says Toady.  "That's high on my priority list.  I've got a lot of competitors in the toy business who want to know what I'm going to dream up for next Christmas.  I asked around about you.  You're discreet and you work for yourself.  That's what I want, a discreet one-man band. No secretaries, no file clerks."

"And the reason I like discreet people such as yourself is because they don't ask questions, they just provide answers."

"I know," says Toady.  "That's another reason I hired you. I’m working on a doll that curses."  He drains his hornet juice.  "Go to London, follow your lead."

And with that, Toady drains his hornet juice and buzzes off.