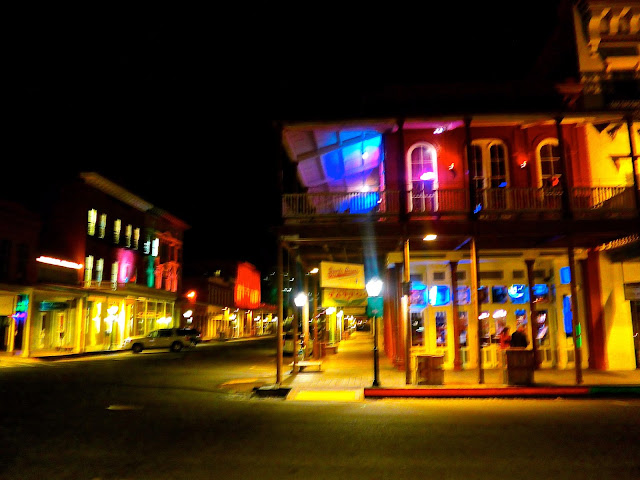 ...and we’re on our way to Old Sacramento, where prospectors, after mining treasure, would go spend it on whiskey and women.

We choose a route through Reno, around north Tahoe and, in Truckee, squeeze in at Squeeze-In for lunch before crossing the Donner Pass, where snowed-in pioneers ate their dead.

Old Sac’s boardwalks are lined with tattoo parlors and gift shops full of trinkets and trash from China.

I have a fleeting urge to flee, but I’m too weary from driving to go anyplace else.

A dark chocolate covered pretzel brings me round, alters my mood, as only chocolate can, and I’m ready to embrace this place.

If there’s a rule on COW trips—and I eschew rules—it’s no advance reservations.


At Wells Fargo’s modest museum, we ask about accommodation.

Mark Twain was a Mississippi River boat pilot before escaping (from The Civil War) westward to become a reporter, so this seems poetic, given our encounters with Clemens so far this trip.

Hendrick’s, up, twist, pass the shaker, and don’t shake it.  (Unless a cocktail contains cream or citrus juice it ought not be shaken, but stirred.)  As for keeping the shaker in front of me, I want the gin and ice to blend a bit, dilute the strength of the former, allow the latter to render it a longer drink, kept cold on ice.

The trick with booze is try to make two libations last as long as possible, because launching into a third is a downward spiral.

I run through my checklist with the barkeep.  Even though this riverboat bar joint is upmarket, he has the same answers as the lowliest dive bar.


The menu looks good, and we’re told it’s better than it reads, so we stick with the boat, wild salmon and lentils at the bar.

Then we walk the plank, into Old Town—dark now, deserted.

The tacky shops are closed, only the saloons are alive.

We opt for The Back Door, an institution that stuck it out for decades when times were tough and only the homeless congregated in this part of town, before its revival.

This is where I finally cave to Fireball.

Nick the bartender chuckles.  He’s 85, has been serving drinks here half his life, seen it all.

I sip, and groan.

“It’s like drinking Red Hots,” says Van Stein, referring to a candy we knew as kids, and which I never liked.

I signal Nick.  “I’ll pay for these, but we need something different.”

He chuckles again, removes our un-drunk shots, says, “Don’t worry about it, no charge,” and pours us Crown Royal.

I ask Nick about his bestsellers. 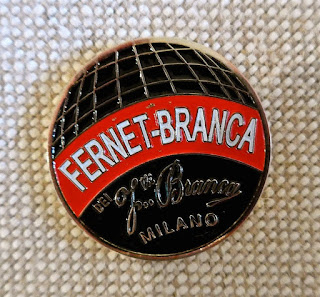 “Been selling a lot of this,” he says, about to pour Fernet Branca for The Bakersfield Boys down the bar:  corpulent lobbyists in town to promote oil interests and whoop it up—big lunches and dinners lubricated by a lot of whiskey and wine, and Fernet to help digest it all.

I show Nick my Fernet challenge coin, and since he can’t match it with one of his own, I qualify for a shot on the house.   But I’m done, and anyway I prefer this potion as an aperitif because it makes anything that comes next taste great. 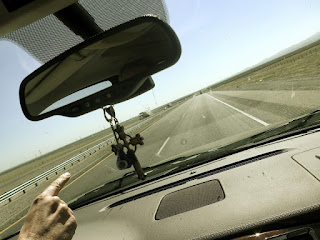 Next morning, a grueling 399 miles on I-5, straight as a pencil and nothing interesting to see aside from thousands of nervous cows at their final stop before slaughter, the air thick with bovine flatulence, more responsible for global warming than carbon dioxide from transportation.