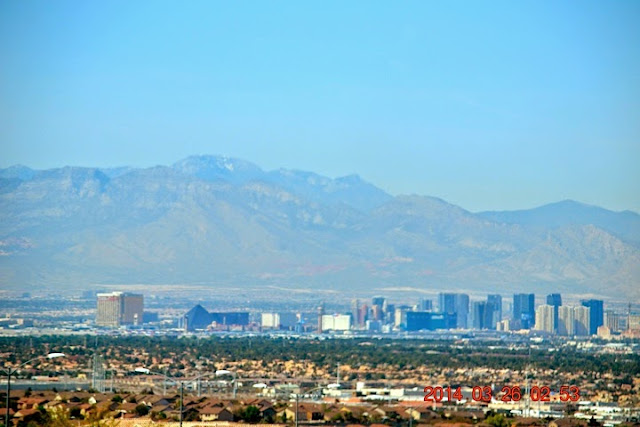 The Strip sucks us (my son-in-law, his dad, and me) into  the heart of Las Vegas like a vacuum cleaner gone mad and, before we know it, we’re on the 23rd floor of the Mandarin Continental, the only upmarket hotel without a casino; a place to chill, keep Vegas at view’s length.

I would have preferred my room from the night before in Jerome, Arizona with a real key, fresh air through a window that opens, a simple light switch for an incandescent lamp, and a TV that switches on and off with options for channels and volume—and nothing else.

Because the lighting control unit in my room is rendered useless by my inability to understand it.

The television, when activated, provides multiple choices for entertainment, service, lighting, and at least three other options that will mean zip to me when I get around to switching it on at 11:13 p.m.

For now, I can take only eight minutes of sitting by the pool, so I go for a walk.  Up an escalator and across the strip on a pedestrian connector bridge, many of which have been constructed to move consumers and gamblers along like cattle.

The idea here is to relieve them as quickly as possible of disposable income (though essential savings are not discouraged)—and thus one enters The Great American Temple, in this instance, a shi-shi shopping mall called The Crystals.

There are many other such temples just a few connector bridges away, all with the same high-end shops:  Gucci and Prada, Vuitton and Hermes, D & G and Fendi, and on and on.

The shop displays, beneath white fluorescent light, leave me cold.

Is this what civilization has evolved to?

I saunter into Gucci, desiring to discover if their classic leather loafers are the same as when I wore them twenty years ago, wondering if there is any magnetism left between us.

A saleslady follows me from the front to the back, watching me in my torn bush shirt, blue jeans, and beat-up suede boots. 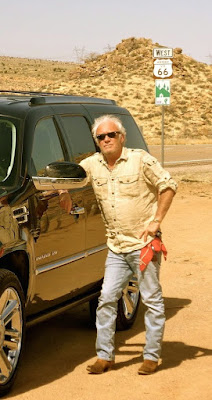 “Can I help you with anything?” she asks, clearly amused by something.

“The way you’re walking around here, you look like you own the mission.”

Which means I obviously don’t need anything fancier than what I’m already wearing.

When I awaken, I am disoriented for a few moments, neither knowing where I am nor what the hell I’m doing where I am.  It takes a few minutes of lying perfectly still to process the reality of the situation.  And once I realize reality, I remember I am expected for cocktails in the bar one floor up. 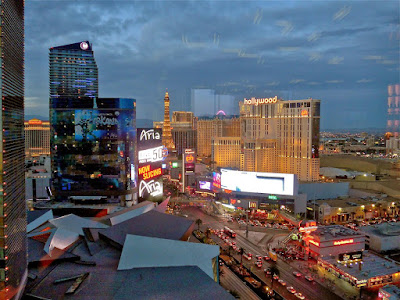 Through picture windows, we watch late afternoon turn to dusk and then into night while the Strip’s colorful neon deepens in contrast.

I find myself missing Jerome.

Mastro’s seems right for a good steak, though if I'd known it was located in a Great American Temple, I would have opted for someplace else. 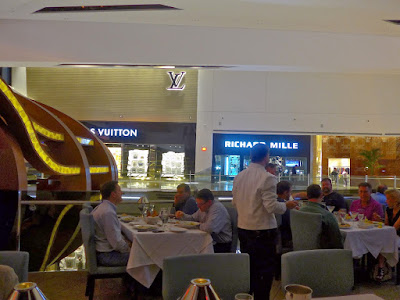 I fall asleep near midnight after giving up on the TV set, awakening around 3 a.m. (the devil’s hour) feeling much too warm.

It takes some fumbling around, but in the absence of fresh air I discover that the canned air is set at 73 degrees.

Miraculously, or by sheer fortitude given my grogginess, I discover a button that controls the climate.  I punch it mercilessly to the low sixties, drink some water, and hope for respite.

The cool eventually comes.  Followed by the light of a new day framed by floor-to-ceiling windows, brighter and brighter, intruding through my closed eyes, until the sun itself appears—and it’s only 6:42. 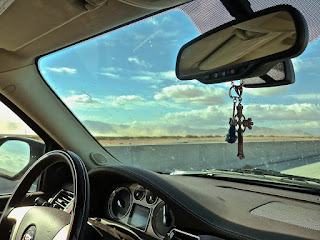 Not long thereafter, seeing Vegas in the COW’s rearview mirror puts my soul at ease.

Posted by Robert Eringer at 6:44 AM