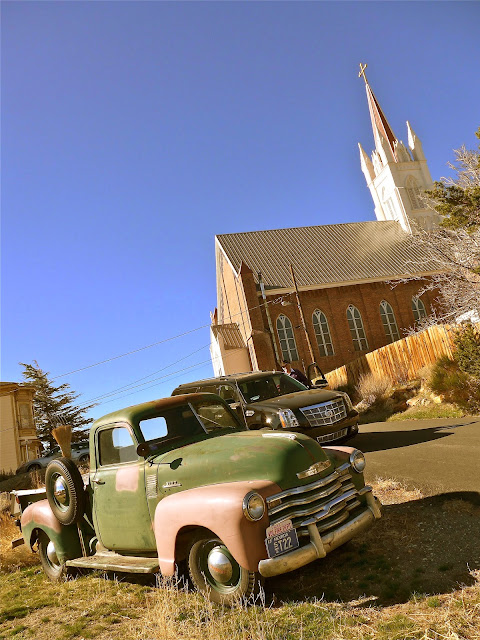 Carson City is uninviting from the freeway, and less inviting up close, and not part of our itinerary anyway.

So we fork off into the hills, past the Comstock Lode, still stripping the mountain of its metal. 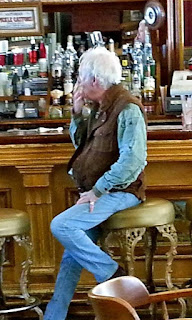 Virginia City is to silver what Angels Camp and Mariposa were to gold.

Its main drag, C Street, was made famous by the long-running TV series Bonanza, and that's where we find the Silver Queen Hotel, where, 150 years ago, Mark Twain’s old newspaper, The Territorial Enterprise, was housed. 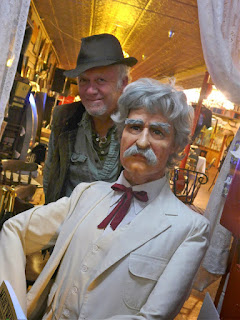 I get a room facing over the street that I reckon was Mark Twain’s office.

The other guests, this day, appear to be female couples more bullish than the COW. 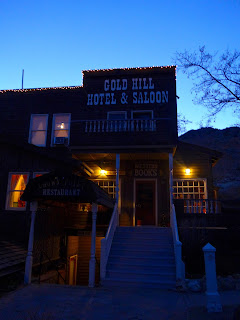 As the sun begins its final descent, we head down to the Gold Hill Hotel, the oldest in Nevada (established 1859), into its cozy saloon, whose only customer this late afternoon is an elderly man with a haunted look and a bald dome fringed by long thin gray hair bonding into a foot-long beard.


When he tells us his name is Wilson, I think of Tom Hanks’ special friend, the volleyball, in Cast Away.

Wilson has cast himself away from his past as a sheriff, and professes to know everything there is to know about this region.

“What do you know about Mark Twain?” asks Van Stein.

“He used people, stole their stories.” 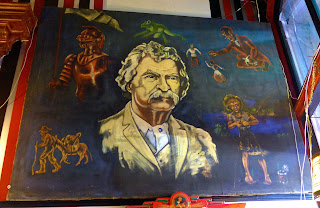 But isn’t that’s what writers do?

They have a partly innate, mostly practiced ability to pen what they hear from others, enabling tales to endure.

Jack the barkeep serves us Jameson, martini-style, while I pump him with questions about the drinking habits of his customers.

Grey Goose and Ketel One.  Check.

Fireball, off the charts.  Check.

Not much gin or rum.  Check.

Next, we ask about food.  Jack recommends the rib-eye steak.  But that’s before we hear about the St. Paddy’s Special:  Corned beef and cabbage or a Reuben’s sandwich.

“How about a Reuben’s with a side of cabbage?” I ask.

Nightfall brings the cold.   Jack sets the fireplace alight, almost smoking us out until Wilson opens the front door to create a backdraft.

At Jack’s request, we agree to drive Wilson home to his little wooden house down the steep hill.

Before climbing in, Wilson takes a good gander at the COW, says, “Damn, you boys are serious,” and then, puzzled by our random act of kindness, asks,  “Why are you boys driving me home?”

Van Stein erupts, “To get your gold.”

We laugh, Wilson, too.  “I got some,” he says.  And he’s probably sorry he did, because now he has to worry if we’re coming back later to get it.

Wilson is unsteady and I help him out of the COW.  He gratefully shakes my hand and, in a voice choking with emotion, says, “Remember history.”

I assure him I already do. 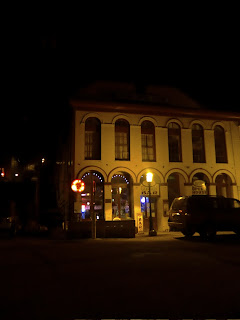 Back in Virginia City, Van Stein and I amble out in search of a saloon to cap the night.

Silver Queen directs us to a joint called Old Corner Bar “where the locals hang.”

It is Virginia City’s only life this night.

A couple ranchers in cowboy hats own the front corner of the bar.

We nail stools down the other end and quiz the elderly female barkeep with my liquor checklist, which checks out exactly the same as the others. 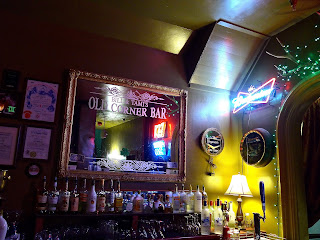 We try to light cigars, legal in Nevada, but this bar enforces their own no-smoking policy. 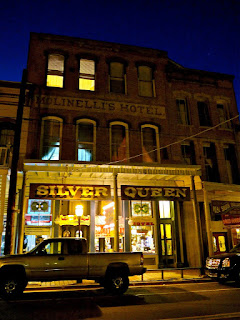 We try again at the Silver Queen’s bar, get told the same, but the barkeep lets us smoke—until the owner arrives unexpectedly and throws a tantrum, so we take our smokes and libations onto the unfinished balcony accessed through the window of my room.


I am awakened around six a.m. by the sound of moans.

Ghosts?  Nah, just a pair of bulls nearby. 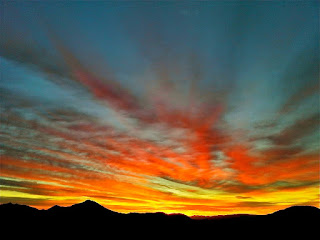 First light outside inspires me to crank up.

There’s nowhere for coffee in Virginia City, so we pack up and return to The Gold Hill Hotel breakfast room:  hot coffee and a modest buffet.  When we ask to pay, they tell us breakfast is for guests only and don’t know how to charge us, so they don’t. 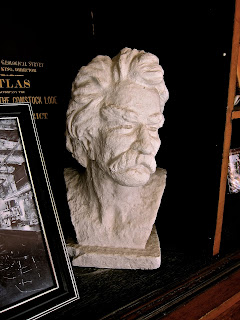 I offer to buy a plaster bust of Mark Twain on display in their gift shop, and though fifty bucks tempts them, I respect it has already found the right home.

So I still need a memento, preferably something in silver.

The Gold Hill gals direct us back to the far end of Virginia City, to the Marshall Mint.


Marshall, himself, mints his own rugged silver bars, each stamped with his Virginia City motif.

“Mister Marshall won’t be doing this much longer,” says the saleswoman.  “And there’s no one to replace him.”

I choose a couple one-ounce silver bars, and we’re on our way to Old Sacramento where prospectors, after mining treasure, would go spend it on whiskey and women.

Posted by Robert Eringer at 6:40 AM