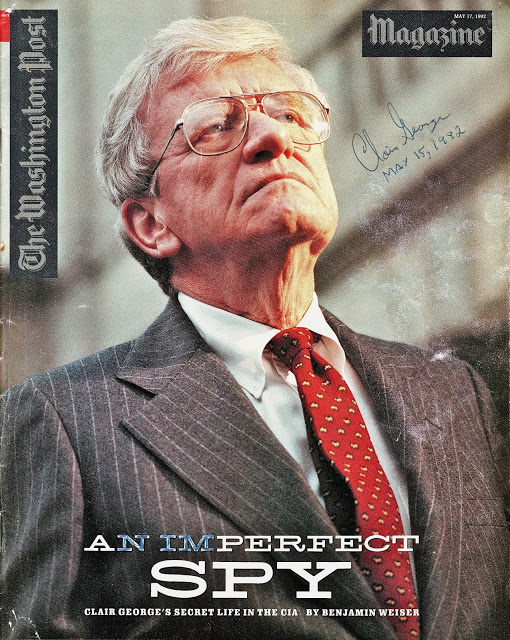 A figure with a tan raincoat draped over his arm sat waiting to meet me. He stood and smiled broadly; we shook hands and entered the restaurant for a chat over lunch.

Clair George, then 57 years old, was in the process of leaving the Central Intelligence Agency (CIA).  He had worked in their clandestine division for over thirty years and risen to its most coveted top job as deputy director for operations.

I was a 33 year-old literary agent; my specialty, packaging books by Washington insiders.

I had found Clair through Jack Smith, a former CIA deputy director for intelligence, who, in retirement, had turned to penning novels.

Clair had recently been in the news in connection with the Iran-Contra scandal; his marginal involvement in that arms-for-hostages operation had cost him his job.  You’d see photos of Oliver North and Richard Secord in The Washington Post, but Clair’s picture would always be a generic silhouette, as if to confirm the authenticity of his profession.

The mystery photo now had a face:  Bland doughy facial features, with a nose and mouth that resembled Marshall Matt Dillon (James Arness) from TV’s Gunsmoke; graying red hair, ruddy features and sparkling blue eyes.  (A decade later, those eyes, which had seen so much, would dull from macular degeneration.)  Clair was about 5’9” and had the air of a man who could fit in anywhere without being noticed, unless he chose to be.

Naturally curious, Clair was willing to meet me, wanted to know all about my involvement in the book publishing business, and what, specifically, I had in mind for him.  He was funny, charming, and disarming.

I later learned that the only reason he met me was because my pitch had amused his wife, Mary, who acted as his shield during the first Iran-Contra news frenzy.  She was his telephone call screener and front door gatekeeper.  A couple of national security correspondents from major news organizations had even reduced themselves to threats when she would not allow them through:  cooperate with me, they told her, or else.
Mary gave them short shrift as only Mary could.  Clair rarely spoke with the media.  Period.

But my pitch was this:  How about writing a Spy’s Guide to Europe?

Mary and Clair had met at CIA headquarters, where, as a young woman, she had worked as a secretary.  He was immediately smitten by her, and barged into her office to say, “I need to talk to you about this report.  Over lunch.”

Mary left the CIA upon marrying Clair; some of their happiest years were spent in Paris, France, to which Clair was posted as a young CIA officer.

I explained to Clair how book packaging worked:  I would help him write a detailed proposal, which I would submit to editors that specialized in the nonfiction espionage genre at five big publishing houses.  We would, I was confident, be offered a contract, and Clair would write a book.  If he needed a ghostwriter, this could be arranged.

Clair said he would think about it.

Many months later, we met again, this time for lunch at the swank Hay-Adams Hotel, across from the White House.

It was a good meeting, as Clair was fine company, with an easy laugh and great sense of humor.  But it seemed he would never produce a tell-any, let alone a tell-all.  Self-promotion was anathema to Clair.  He was the perfect spy.

I was about to move to Monaco, on the French Riviera, in search of new adventure, so it hardly mattered to me anymore; I was happy just to have made the acquaintance of this legendary spymaster.


In time, we would travel to Europe together, on over twenty occasions, often aboard Concorde, on assignment for our clients. 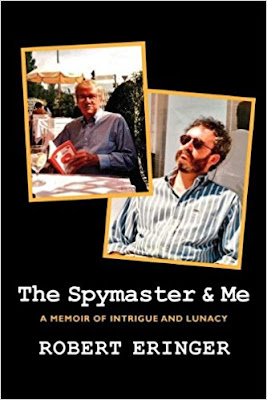 In 1990, a legendary CIA spymaster and a young writer partnered to do creative problem resolution for select clients. These included a circus, a reclusive Monte Carlo investment adviser, a mega-wealthy Italian Countess, and a New York billionaire. They took assignments based on the potential of a high Laugh Quotient with this dictum: "If it ain't funny, we don't do it." In this way, Clair George and Robert Eringer commuted to Europe by Concorde, stayed in five-star hotels, and laughed their way through London, Paris, Geneva, and Monte Carlo. The Spymaster & Me is a poignant easy, breezy read, combining humor, zest and brio.

Posted by Robert Eringer at 6:39 AM