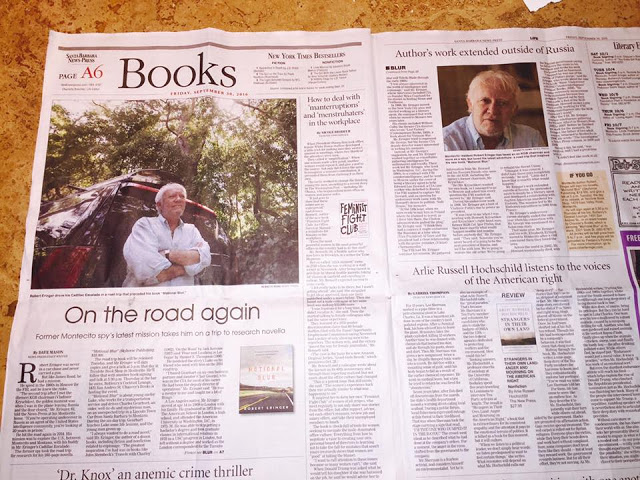 As a journalist, novelist, private spy, undercover operative and director of an intelligence service, it can certainly be said that Robert Eringer has enjoyed a wide-ranging career.

He began his writing career as a London-based foreign correspondent for The Toronto Star and The Blade (Toledo, Ohio), filing feature stories and high-profile interviews from around Europe.  As an investigative reporter for British large-circulation Sunday newspapers, Eringer raked the gutter, exposing sleaze-balls and scumbags.  His specialty was infiltrating extremist groups, including violent anarchists, neo-Nazis and the Ku Klux Klan.  (He still possesses a red robe and hood the KKK tailored for him.)

Eringer evolved from journalism to private intelligence before embarking on a ten-year career operating undercover for FBI Counterintelligence.  Some of his missions are included in Ruse (Potomac Books) published in 2008.

Using his intelligence experience as grist, Eringer merged two skills (writing and spying) to author a cluster of humorous espionage novels that combine intrigue and lunacy.  As a novelist, Eringer inhabits a world of master spies, billionaires, royalty and delusional lunatics.  In reality, he keeps the same company, with battle scars to prove it, documented, although inaccurately, throughout cyberspace.

Commencing June 16th, 2002 until December 31st, 2007, Eringer was spymaster to Prince Albert II of Monaco.  After Prince Rainier’s death in April 2005, and Albert’s ascension to the throne, Eringer created the principality’s first (unofficial) intelligence agency, the Monaco Intelligence Service.  It was killed off by a person who feared what it had uncovered.

Resettling in Santa Barbara, Eringer became “The Investigator” (a weekly column) for the Santa Barbara News-Press.

In 2016, Eringer returned to fiction with the publication of Motional Blur (Skyhorse), acclaimed by T.C. Boyle as “A nonpareil road novel that winds up packing a real emotional punch,” and the forthcoming Last Flight Out (Bartleby Press), a novel about traveling in time through photographs.

He is currently on a mystical journey that he chronicles on his blog Clubhouse on Wheels, which attracts 60,000 visitors each week.

Posted by Robert Eringer at 2:35 PM