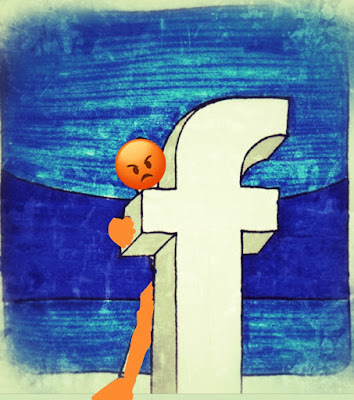 Or because of Facebook’s sloppy business tactics, which allowed third parties to invade my privacy. (They were.)

Or even because Facebook allowed propagandists and promoters of Fake News to thrive and invade my thoughts.

I deactivated Facebook after I realized that my childhood chum had become a self-loathing, angry old white guy.

My old buddy is angry at President Trump (for what it doesn’t matter, anti-Trump is anti-Trump, issues have nothing to do with it anymore).

My old buddy is angry about gun ownership, the Second Amendment of the Constitution notwithstanding. (He should be angry about the pharmaceutical industry, which presses doctors to over-prescribe anti-depressants and other meds that occasionally spur unstable adolescents and adults to rampages of killing, suicide, or both.)

My old buddy believes the transgender revolution, and all its accompanying issues—including state-funded surgery for teens, gender-sensitive competitive sport confusion, and whether to use the prefix Mx. Instead of Mr. or Ms.—is the best thing to come along since hot dogs were invented.

Most sadly of all, my old buddy believes in very late-term (day-before-birth) abortion.

When I tried to delve further into why my old buddy loves Mr. Obama, the best I could deduce is that it’s because Mr. Obama is black.

But because this was my old buddy, who I have known since I was five years-old, I tried to understand his reasoning.

All I could ultimately deduce is that he has become a self-loathing, angry old white guy. And not only. From behind a computer screen, he seems to want to sink a pair of fangs and release venom into anyone who has an opinion different from his own, especially fellow (if non-self-loathing) angry old white guys.

At the age of sixty-four, I guess I configure (as perceived by others) into the angry old white guy depiction.

Except that I am not angry.

My whiteness (or whatever complexion that classifies me Caucasian) derives from being part Polish, part English and part Armenian—and one hundred percent American, having been born on U.S. soil.

That is because my grandparents on both sides lawfully emigrated to the United States. They did so long after slavery was abolished and, so far as I know, they mistreated no one of any race, creed or religion.

They were the mistreated ones, from whence they came.

My grandfather’s hometown in eastern Poland was invaded by Nazis; its inhabitants were cruelly dispatched to Auschwitz, where they perished.

My grandmother’s home country, Turkey, conspired to slaughter her people, the Armenians.

Both the Nazis and the Turks disarmed the minorities they chose to oppress and, once they were disarmed, went about slaughtering them.

This is why the founders of the United States wrote the Second Amendment, to allow a free people to defend themselves from tyranny. Widespread gun ownership tends to keep would-be oppressors in check; widespread gun surrendering has led to attempted genocide.

My parents, the product of two attempted genocides, raised three sons in a relatively peaceful land.  And though sometimes I question how truly free we are, I also marvel about a country where Christians, Moslems, Jews, Buddhists and countless other faiths coexist (generally speaking) in peace.

You can call me a cracker, or call me a snowflake, it does not matter. I don’t use derogatory epithets against anyone, never have, but I can deal with reverse discrimination while remaining proud of my heritage and true to my appreciation for the stars and stripes.

I still get chills when I tour Washington D.C. and visit the Jefferson and Lincoln Memorials; still choke up when I visit the National Portrait Gallery and view a painting of Robert F. Kennedy.

Democracy in the United States, as conceived by Jefferson, has been a difficult, sometimes brutal experiment, punctuated by conflict, not least the Civil War.  But it is governed by a well-reasoned, very enduring Constitution with a system of checks and balances, advise and consent, marked always by a smooth, never-obstructed transfer of power, miraculous in itself, given human folly and mankind’s history.

It is sad for me that my old buddy has descended into self-loathing and hatred, and that he promotes his feelings in explicitly vile terms for all to see—perhaps to vent, maybe to incite, or probably just because he can in our age of so-called “social” media—who the heck knows?

Posted by Robert Eringer at 2:17 PM