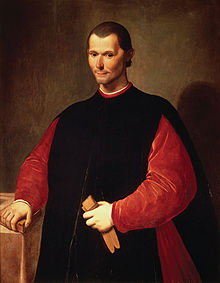 When he was twenty-five years old in 1494, two years after Columbus discovered America, Niccolo Machiavelli—or "Machia," to his friends—entered government service, as a clerk, in Florence.

Florence was then a well fortified and bustling city-state and its autocratic Medici rulers had just been overthrown and expelled, allowing Florence to be transformed into a republic.

This suited Machia just fine since he was a republican at heart and a non-religious humanist in conscience.

But, although a republican, Machia came to believe that only an autocratic royal ruler, a prince, could defend a city-state from hostile foreign powers.

One such hostile foreign power was the Pope and his papal army, along with neighboring city-states, such as Pisa.

Machia kept his republican thoughts to himself while rising to the position of Second Chancellor and undertaking diplomatic missions to other city-states.

In addition, for three years Machia took charge of the Florentine militia, whose job it was to defend the city.

It all turned sour for Machia in August 1512 when the republic was scrapped and a new Pope helped the autocratic Medici family—specifically, Cardinal Giovanni Medici—restore Medici rule.

The Medici family returned with a vengeance.

On November 7th, Machia was fired from his job.

A couple of months later, Machia was arrested and accused of conspiring to overthrow the new Medici regime.

Machia was thrown into the clink and interrogated.

His interrogators tortured him.

They used a form of torture called Strappado. 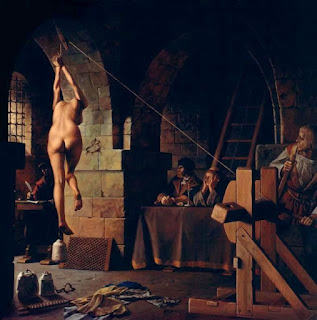 Machia was hoisted from his hands, which were tied behind his back, to the ceiling—and dropped, stopping just short of hitting the floor.

Machia admitted nothing, denied everything, maybe grew an inch or two.

They booted Machia’s butt to the Machiavelli family estate in San Casciano, about twenty miles from Florence, and told him not to come back.

Politics and statecraft was all that Machia truly cared about.

Machia tried to talk his way back into Florence, pledging support for the Medici rule, anything that would keep him engaged in statecraft.

For a political junkie like Machia, exile was almost as bad as the Strappado.

To take his mind off the political intrigue he was missing in Florence, Machia toiled by day in the fields of his family estate, supervising the cutting of trees to be sold as firewood.

Back then, firewood was the prime energy source.

After work, Machia played backgammon in the local tavern.

Evenings he reserved for solitude and madness.

This is what Machia wrote to his friend Francesco Vettori on December 10th, 1513:

When evening comes, I return to my house and enter my study; and at the door I strip naked, taking off the day’s clothing, covered with mud and dust, and put on the regal robes of court and palace; and re-clothed appropriately, I enter the ancient courts of ancient men, where, received by them with affection, I feed on that food which is only mine and which I was born for, where I am not ashamed to speak with them and to ask them the reason for their actions; and they in their kindness answer me; and for four hours of time I do not feel boredom, I forget every trouble, I do not dread poverty, I am not frightened by death; entirely I give myself over to them and I pass indeed into their world.

Machia believed that he interacted directly with Dante, Plutarch, and Plato.

This was Machia’s art, upon which he became totally focused.

It provided Machia therapeutic escape from his fears and depression and led, ultimately, to Machia penning The Prince–-a work produced by what today’s New Agers would call trance-channel, as told to Machia by Dante, Plutarch, and Plato.

No doubt Machia suffered depression from his banishment.

But did torture push him over the edge of sanity, into the realm of hallucination?

Talking to the dead qualifies as an idea of reference.

Hallucination is criterion for schizophrenic disorder.

Machia’s words also imply fears of poverty and death-delusions, which are symptoms of psychosis.
Simply put, Machia had gone nuts.

The Medici family and their interrogators drove Machia to depression and madness, first with the Strappado, and then exile.

Machia’s dialog with the great philosophers, which morphed into The Prince, was published posthumously thirty years after he wrote it.

Machia tried to use his unpublished treatise, The Prince, to tease the Medici family into bringing him back to Florence and help them govern their prized city-state.

But Giovanni did not even bother to read it.

Truth was, the Medici family had Machia pegged:

Machiavelli was a mediocre statesman who took no risks for fear of compromising himself.

Machia was good at two things:

One, playing all sides.

Two, writing treatises, for which his name endures.

When the Medici family crashed and burned in 1527, giving way to a new republican government, Machia rushed to Florence to lobby for high position.

But he got sick along the way, and died.

A few centuries later, Merriam-Webster would define Machiavellian as cunning or devious.

This would have surprised Machia.

It would also have surprised him that his well-known smirk would captivate the world’s attention for centuries to come.

This is where we crack the real Da Vinci code.

Forget Dan Brown and his novel of that name.

The real story is that Machia and Leonardo da Vinci knew one another in Florence during the first decade of the 1500s.

They worked together on a bold and very secret engineering project to re-route the River Arno away from the city-state of Pisa.

Why did those charged with the defense of Florence want to re-route the River Arno away from Pisa?

Because Florence and Pisa were constantly at war, and Florence desired to deprive the Pisans of a fresh water supply.

In those days, if a project failed, those who committed the failure were often rounded up and executed.

Fearing that arrest and execution might be imminent, Leonardo fled Florence and exiled himself to Milan.

Leonardo did this not just because he feared reprisal, but also because of a broken heart.

Why was Leonardo’s heart broken?

Not from a failed engineering project.

From from unreturned love.

And Leonardo was in love with Machiavelli.

Leonardo demonstrated his love by painting Machia as a woman.

These are the facts:

Mona Lisa was painted between 1503 and 1506, the same years Machia and Leonardo worked together on their bold engineering project.

Machia’s biographer described Machia’s enigmatic smirk as “neither a grin nor a sneer; a shield to protect against prying eyes.”

But there is more.

The valley behind Mona Lisa is where the Arno River diversion was projected to take place. 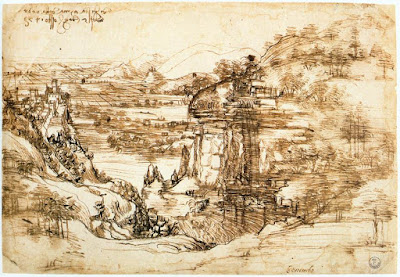 Leonardo first sketched this valley as part of his engineering project with Machia, and he used those sketches as the background when he painted Mona Lisa.

Instead, he kept Mona Lisa near him, as a remembrance of Machia, the man who broke his heart. 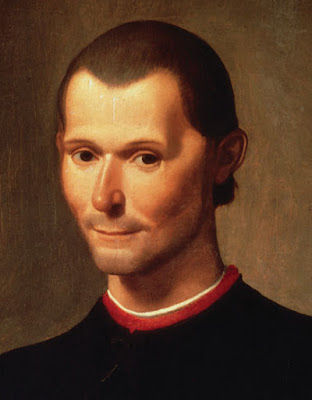 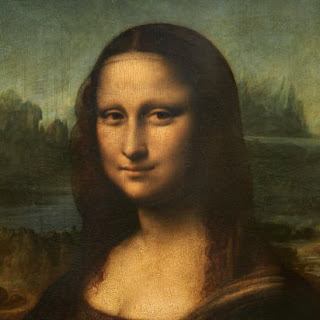 Posted by Robert Eringer at 8:09 PM