Today is the Feast Day of St. Dymphna, patron saint of lunatics.

She was born in Ireland, very early in the seventh century, the daughter of a pagan king named Damon and a mother who converted to Christianity to ensure Dymphna would be educated by a priest named Gerebern.

Her father, inconsolable in the aftermath, fell into a deep and very dark depression.

Damon's courtiers worried that their king's mental health would further deteriorate unless he found a new bride, and they urged him to do so.

Thus, Damon dispatched envoys throughout Ireland to find a woman as beautiful as the wife he'd lost.

When they returned without a new woman, a deranged notion struck the king.

My daughter, Dymphna, looks almost identical to her mother...

Dymphna was horrified by her father’s proposal.

Each time she refused his advances, the king’s rage grew worse.

Gerebern, the priest, was also perplexed by this situation, and he plotted an escape.

With assistance from the court jester, Dymphna and Gerebern crossed the English Channel by boat and sailed up the River Schelde to Antwerp in what is now Belgium.

Feeling unsafe near a waterway, they made their way inland to Zammel, a small settlement of about fifteen houses, six miles from what would later become Gheel.

When King Damon realized his daughter and the pesky priest had duped him and fled, he went nuts.  (Also, he no longer had a court jester to help him see the humor in this.)

With a small army of warriors in three boats, Damon set sail in search of Dymphna.

How did he know where to go?

Dymphna and Gerebern recklessly left a trail of their native coins as payment for services rendered en route to a new life abroad.

The final tip came from a woman at an inn called The Kettle, in a village called Westerlo.  She pointed out the direction Dymphna had taken. (Legend suggests arthritis cut in immediately; the woman’s arm remained rigidly outstretched the rest of her life.)

When Dymphna and Gerebern learned the king and his warriors were near, they fled Zammel.

But not fast enough.

The king caught up with them six miles away.

Blaming the couple’s misadventure on Gerebern, Damon slew the priest without further ado (no trial necessary).

Then he asked his daughter one last time:  “Will you marry me?”

Damon commanded his warriors to execute his daughter.

Not one stepped forward.

So the crazed king raised his mighty sword and severed Dymphna’s head with one blow. 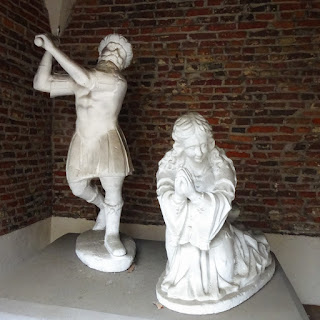 (No one knows what happened to the court jester.)

Adding insult to murder and mayhem, Damon and his warriors left the scene without bothering to bury their victims.

Zammel’s citizens were greatly distressed by the carnage they found at the scene.

They interred Dymphna and Gerebern at the very spot they were slain.

Word of what happened that tragic day in 621 A.D. traveled around Europe.

Within a few hundred years (word traveled slow back then), the burial site became a shrine for mentally disordered pilgrims.

They discovered that if they prayed at Dymphna’s burial site, to her relics (bones), their mental illnesses gave way to sanity.

(It sure beat an Abilify/Zoloft cocktail.)

After notching up a few such miracles, Dymphna qualified for sainthood

A whole town grew up around it.

Belgium's mentally-disordered and sanity-challenged citizens are fostered into local families as part of a program called Family Care System of Mental Patients, and is considered to be the world's most humane way of looking after the insane.