In September 2013, the artist Thomas Van Stein and I visited Oslo, Norway on a luna-seeking mission to celebrate the 150th birthday of Edward Munch (pronounced Moonk), who painted Scream, one of the world's most iconic paintings.

Munch may well be the original expressionist (and fauvist), though his genre could have been called emotionalism.  He painted what he deeply and very truly felt, from imagery in his mind, striving through symbolism to reflect the secret life of the soul.

Munch bared his own soul, ensuring that those who view his paintings actually feel the anxiety and despair he felt.

For as long as I can remember I suffered from a deep feeling of anxiety, which I have expressed in my art. Disease, insanity and death were the angels that attended my cradle, and since then have followed me through my life.

Back then, no Valium or Xanax. Only alcohol. Munch drank a lot of it.

He felt as he painted, painted as he felt.

It had not been done before.

Many who viewed Munch's paintings could not deal with his honest emotionalism. For some folks, it was simply too unnerving, and highly disturbing.

Munch did not care. He knew what he was doing and why. And he also knew he was a great artist.

The image above was painted from the Grand Hotel, whose Grand Cafe Bar was a favorite of Munch's for drinking absinthe, often before breakfast.

“Ekeberg,” I say to our driver/tour guide.  “We want to see where Scream was painted.”

He drives us to Ekeberg Restaurant, a grand view of Oslo over the fjord, but on higher ground than Munch’s perspective.

Not finding it, our driver asks the restaurant staff. But no one knows precisely where Munch painted Scream.  Someone suggests a nearby path leading even higher.

“Don’t you think it’s strange,” I whisper to Van Stein, “that no one around here knows where Scream was painted, including a professional driver who’s supposed to know Oslo like the back of his hand?”

We drive around some more.  Can’t find it.  So back to Ekeberg, a trail or two.

The driver consults an older gent.

We jump back in the car, head away from Oslo and circle around.

Another panorama comes into view. 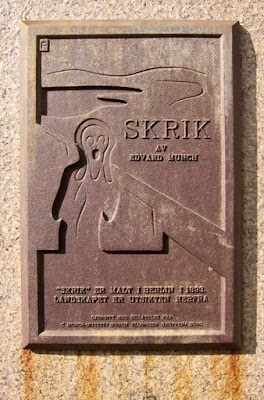 Streaks of rust beneath the plaque look like blood. 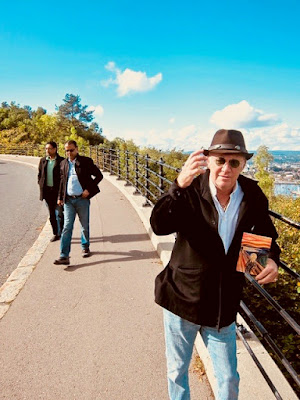 Just as I am about to stand in the same spot as Munch’s Scream figure, two dark strangers appear out of nowhere and occupy the space where Munch placed a couple of darkly dressed background figures in Scream.

I went along the road with two friends.  The sun set.  Suddenly the sky became blood—and I felt the breath of sadness.  A tearing pain beneath my heart.  I stopped—leaned against the fence—deathly tired.  Clouds over the fjord dripped reeking blood.  My friends went on by.  I just stood trembling with an open wound in my breast.  I heard a huge extraordinary scream pass through nature.

Munch also wrote that he had been “stretched to the limit, a breaking point” from the sickness and death and loss that tormented his mind, along with the schizophrenia of his sister, Laura, institutionalized at Gaustad, an asylum for the insane within screaming distance of this site.

Animals, probably reindeer, in addition to the howls of lunatics, could be heard screaming as they awaited slaughter at a nearby abattoir. 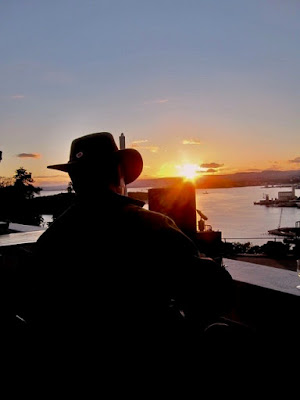 We returned at sunset so that Van Stein could paint, from the terrace of Ekeberg, the same blood-red September sunset Munch had witnessed about 125 years earlier.


This nocturne graced the cover of Montecito Madness, a short comedy I penned about hanging out in America's most affluent community.

The artist and I sit at a high-top inside the old Montecito Bar brainstorming our next bounce into the depths of intrigue and lunacy.

In an upper floor window one can see Charlie Chaplin, who built the Montecito Inn and whose ghost still roams its corridors, pulling pranks on patrons.

The Woody with surfboard pays homage to our dear friend Bruce Johnston, one of The Beach Boys.


Walking up the pavement is another dear friend, acclaimed author T.C. Boyle.

Painted into the wall between four windows are the classic images of manic and melancholy, based on statues that once greeted patients on their way into the world's first mental hospital, Royal Bethlem, better known as Bedlam.