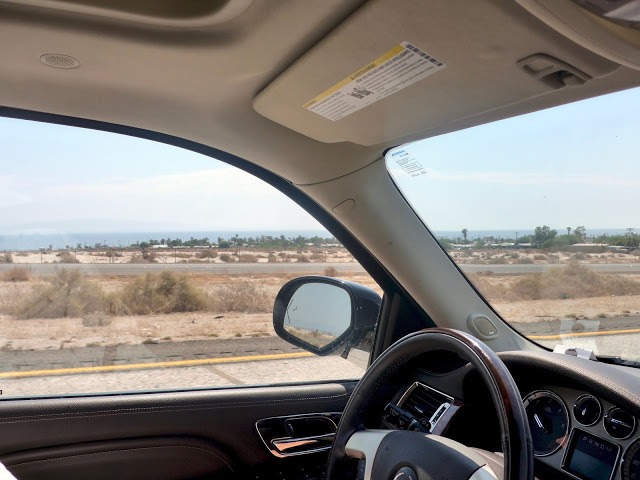 For my summer vacation last year, I went to the Salton Sea.

But without hot, what is summer?

To reach the Salton Sea from a desert oasis called Rancho Mirage, go straight down Frank Sinatra, right on Bob Hope, cross Gerald Ford, turn right onto Dinah Shore to I-10, fork onto Route 111 and pass through Mecca.

No one was praying in Mecca.  Hardly anyone was even there. I wouldn’t be there either if I didn’t have to pass through it.

The only retail business I saw in Mecca was called 99 Cents. But it was closed. Permanently.

The Salton Sea is actually not a sea, but a lake.

Okay, let’s be truthful.  The Salton Sea is really a cesspool. That’s because this “sea” or lake is so salinated that precious little life within or around it can survive.

No one is allowed to jump into the Salton Sea.  The fish jump out.

Our first stop is Salton City.

The streets of Salton City have beautiful names:  Seaview Drive, Crystal Lane, Salton Bay Drive, Honolulu Avenue, and so on. 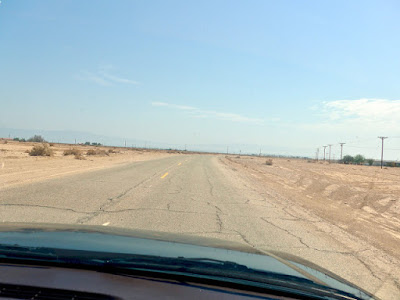 Their hopes were dashed by Mother Nature.


The “development” today is a bunch of barren empty plots on a grid bordered by scores of power lines.  It may be the cheapest place to buy seafront property in the whole of the United States. 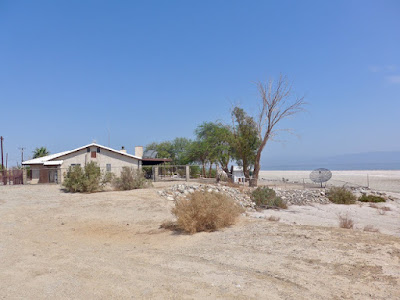 The only sign of life in Salton City is way inland, on an exit ramp from the highway, which has an ARCO Travel Center with a tower/marquee announcing what they sell:  gasoline, bags of ice, propane, spare parts for RVs, and Jack-in-the-Box hamburgers.

Our next stop is the Sonny Bono Natural Wildlife Center on the far south end of the Salton Sea.  The problem is this:  there is no wildlife. 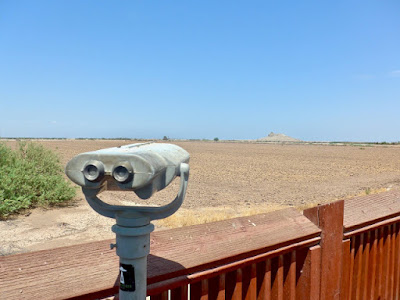 And the sea water, which once came alongside this center, is long gone and cannot be seen even with high powered-binoculars on the center’s observation deck, which are corroded and broken anyway.  (Sonny Bono may have this, babe—but it ain’t much.)

Near the Sonny Bono Center are three power plants, from which noxious smoke spews from gigantic chimneys into the air.  As if more poison were needed here.

The nearest town to the Sonny Bono Center is Niland, whose magnificent centerpiece—an L-shaped building with pillars and porticos—is empty and dilapidated. 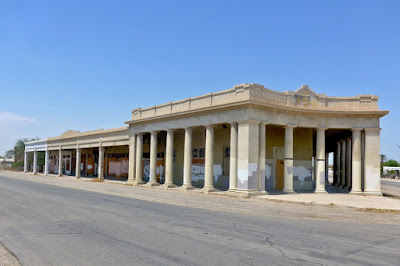 The action, if you can call it that, is alongside Niland’s highway:  a single motel called Motel.

We carry on, veering east, toward Salvation Mountain. 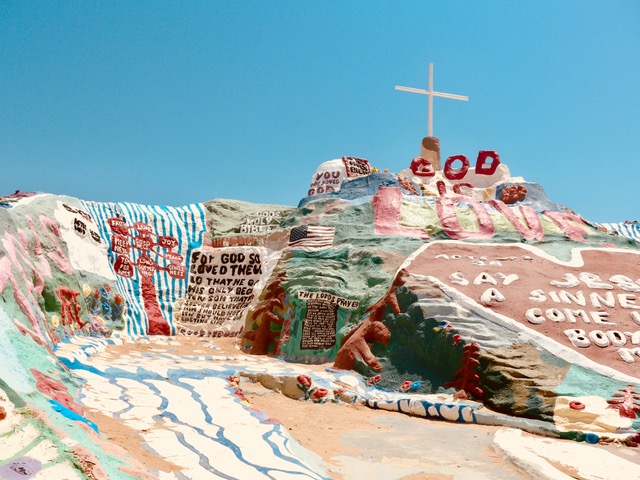 Salvation Mountain is an art installation, the result of 500,000 gallons of splattered paint and twenty-eight years of spiritual fervor.

It was created by a drifter/visionary named Leonard Knight.

When Leonard was 35 years old, he chanted the Sinner’s Prayer in a van outside his sister’s house in San Diego and experienced a vision.

Leonard joyfully returned to his native Vermont and went from church to church to spread the simple message that had been conveyed to him by the vision he’d experienced:  Accept Jesus into your heart, repent your sins, and be saved.

Church leaders did not like Leonard’s simple message, which became even simpler when he changed it to, simply, God is love.

(Churches need organization, hierarchies and money to exist, grow and prosper.  Priests and gurus know that people think they have to work hard, maybe for many years, and donate lots of money, to become spiritually gratified.  For that reason, hierarchal organizations don’t approve of simple messages.  And they particularly don’t approve of direct access to a higher power that cuts out the middleman.)

So, Leonard spent years trying to piece together a hot air balloon from scratch so he could launch his message—God is love—into the sky.

But he could never get his balloon off the ground.

When Leonard settled in Slab City, near Niland and the Salton Sea, due to his fondness for a hot desert climate, he decided to convey his message by creating a small monument.

Leonard could not pull himself away from his monument, which grew from small to big, then bigger and bigger, until it was a hill.

What did Leonard do?

He thanked the Lord for demonstrating the danger his hill posed.  And then Leonard started over, “with more smarts,” as he put it.

He built an even bigger hill, which grew into a mountain.

But his mountain remains.

Atop the semi-dome of Salvation Mountain are these words:  GOD IS LOVE.

Below GOD IS LOVE is a large red heart, and within the heart are these words:  Say Jesus I’m a sinner please come upon my body and into my heart. (This was the prayer/mantra Leonard was chanting when he experienced an epiphany and accepted Jesus into his heart.)

Beyond Salvation Mountain is Slab City, which makes Burning Man look like an effete imposter.

Slab City is the real thing, year-round—and no one from the high-tech elite is flying in on private jets to show off their hip-ness and figure out how to synthesize ecstasy and keep you transfixed to their social media sites and apps.

Slab City is a community of mobile homes that are not so mobile anymore.

And beyond Slab City is East Jesus.

East Jesus gets its name from the pioneers that “settled” North America.

East Jesus was slang the pioneers used when they were in the middle of nowhere or lost.   One pioneer would ask the other, “Where the hell are we?” The other pioneer would scratch his nuts and say, “Darn, must be East Jesus.”

When we arrive, it is clear that East Jesus is not just the end of the road, but also a portal to another reality—or surreality. 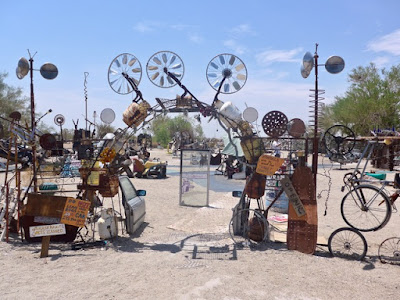 This is signified by a simple framed glass door that stands all by itself, attached to nothing. When you pass through this door, you are truly in East Jesus.

There are no people here this day, though you have a sense that The Hills Have Eyes.

A sign nailed over a shack window announces Terrible Psychiatric Advice Inside 25 Cents.

A hundred old television sets are stacked upon one another, seven-high, to create a wall—or a bank of messages.  Words and phrases have been affixed to the screens such as Blah and Fake News and You Need More Stuff and Irri-tainment and Don’t be Yourself and This Machine Kills Brain Cells.

One display features a burned-out car, with this sign:  Car-B-Que.

Other displays feature modes of transportation:  a crashed plane, an abandoned boat, a vintage VW hippie bus adorned with stickers, and a house that appears to have fallen from the sky and landed on the Wicked Witch of the East.

These various forms of transportation are unneeded for us to get back through the portal, as we simply roll out as we’d rolled in, past a farewell sign: 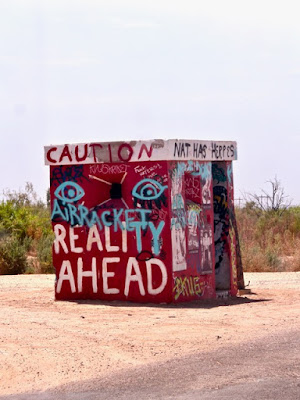 Sixty years ago, Bombay Beach was a gem of a resort.

Today, Bombay Beach is a vision of the apocalypse.

The main drag of Bombay Beach is Avenue A.

It bustles with inactivity.

Bombay Beach has its own landmark version of the Eiffel Tower or Washington Monument.  It is called Cell Phone Tower.  This is a real plus because it means you get great cell phone service.

Bombay Beach has a bar, just one, called Ski Inn.

Sixty years ago, customers could water-ski right up to the bar.

No one water-skis up to Ski Inn anymore.

The reason no one water-skis up to Ski Inn anymore is because they can’t.  They would have to leave their water-skis about a half-mile away and walk the rest.

And if they got wet while water-skiing, they would probably be on their way to Pioneers Memorial Hospital, not Ski Inn.

Bombay Beach is about what happens without water or when water goes bad.

A nauseating, putrid stench fills the air throughout Bombay Beach.

You know how, after a few minutes, noses adjust to stenches?  This doesn’t happen in Bombay Beach. 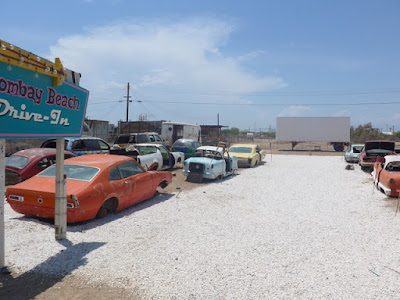 After four hours’ circling the Salton Sea, we are overheated and manic-eyed, and rolling back toward the material world, which in Rancho Mirage means a gazillion country clubs and golf courses and, in nearby Palm Desert, every shop, brand and fast food shack ever created.

Upon returning to “reality,” I understand that were it not for being phenomenally fortunate through family and some modicum of skill, I might have ended up in Niland or Slab City or East Jesus.

So, if it seems like at any point I have been poking fun at the folks who live in these places, it is a misperception.

I’m laughing with them at the material world.

For these are my people, the wild ones, the mavericks, the artists, the rebels.

And may God—or The Source or Mother Nature—bless them all. 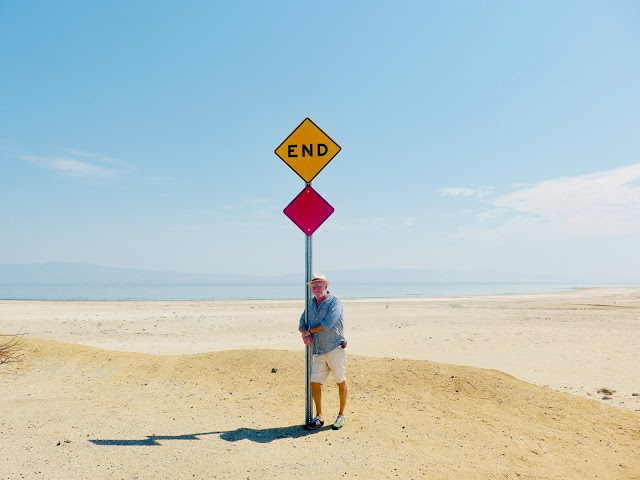