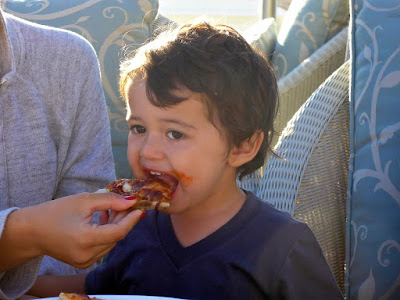 I call my 4-year-old grandson “my little guy” and “The Dude” and I love that he’s so cuddly and affectionate.

I buckle The Dude into the car and power up an iPad to ensure his contentment during a ninety-minute ride from the American Riviera to the Big City.

My little guy giggles with delight as he battles dinosaurs that eruct comical side effects from his screen.

Dinosaurs are his passion, and he has collected very many dinosaur toys, from plush ‘sauruses of one type or another to hard plastic dinosaurs in all shapes and sizes, to a walking, roaring, lit-up Dominus T-Rex—his favorite dinosaur of all, almost as tall as himself.

He knows more names of dinosaurs than I ever knew existed.

Forty minutes on, rolling through Camarillo, The Dude feels a twinge of impatience.

“Are we almost there?”

It isn’t a whine, just a legitimate question for an active little boy sitting in the same spot for what must feel like an eternity.

“See those mountains up ahead?” I say, pointing through my windshield to the Conejo Grade in the distance.  “We’re going to zoom right over them to the other side!”

“Zoom over them?” he says in wonderment, and maybe that’s one of the things I adore most about this little guy, his sense of wonderment, and his ability to absorb, process and retain new information—and then play it back to me, often with a new twist.

I tackle the grade with ferocity, zigzagging lanes to overtake cars whose engines are challenged by the road’s seven percent incline, cresting the peak and commencing our descent.

My little guy is momentarily awed by my fancy steering, and cheers me on, with glee, before reabsorbing himself with colorful dinosaurs dancing across his screen.

Soon we ramp off, cruise city streets, and he looks around enthusiastically, repeating my words with glee.  “City streets!”

A few minutes later we arrive at LA’s Farmer’s Market, a landmark since it was founded in 1934, and a regular go-to for my mom and dad, my brothers and me, when I was a freckle-faced little dude myself.

Much of Farmer’s Market is the same as it was half-a-century ago, starting with the pie maker whose large picture window allows for shoppers to watch the bakers at work kneading dough and filling tins with pie crust and fruit.

I pick up my buddy and show him the action, and for fifteen seconds he is mesmerized by the activity on other side of the partition.

My little guy’s favorite food in the whole world is pepperoni pizza, and that’s why we’re here, because the best pizza pie from my childhood is served at Patsy D’Amore’s, part of what may be the world’s first food court, if unlike anything you see in shopping malls.

For a start, these stands are all mom-and-pops, the way America once was.

My little guy doesn’t just eat pizza; he has a love affair with it.

As I devour my own plain slice, I watch him bite into pepperoni, cheese and tomato sauce, his bedroom eyes savoring the flavors.

Adjacent to the pizza shack is Bob’s Donuts, so when my little guy is finished I lift him in my arms and point out all the varieties of freshly made donuts.

“Which one would you like?” I ask, though I already know he will choose a donut with pink frosting and rainbow sprinkles.

(When you ask The Dude his favorite color, he always answers, “Rainbow.”)

Back at our table, while I sip coffee and nibble an Old Fashioned, my buddy dives into his frosted donut, literally, head first, licking at the sprinkles, eventually leaving the dough for sparrows that make their presence known with bold approaches.

My little guy delights in little birds, in living creatures of all kinds.

He loves animals, especially dogs, and it is uncanny how much canines adore him.

They are drawn to the innate warmth he radiates through their sixth sense; they snuggle into him, lick his face, and in return he strokes them with a tenderness that prompts dogs, large and small, to roll over, wag their tails, and refuse to leave his aura of genuine affection and happiness.

Afterwards I walk hand-in-hand with my buddy to an old wishing well.

When I was his age I marveled at the hundreds of coins at well’s bottom.

I hoist my dude up onto the rim of the well and hand him a quarter. “Make a wish and toss it in.”

My little guy thinks about this very carefully with his dreamy eyes, and finally says, “I wish I were alive.”

And like most little boys he is already on to the next thing.  In this case:  a toy store.

My buddy is in his element now, and he knows precisely what he’s looking for:  Dinosaurs.

It does not take him long to identify his prize:  a plastic cylinder filled with different colored miniature dinosaurs.

Once in his custody, he spills this collection onto a picnic table and sets them up, one group facing the other in preparation for battle, all the while sucking a blue Tootsie Pop I chose for him at a candy stand.

At some point, and I have no idea how it happens, I turn around and my buddy is gone.  His toy dinosaurs remain on the table but he is nowhere to be seen.

I jump up, panic-stricken, looking around in all directions, a sea of people around me but no little guy.

I take a few steps, peer down an aisle, nothing, a few steps the other way, calling out to him, in normal voice at first, then louder, and louder still.

And just when I think I’ve lost him, I hear, “Here I am,” with a joyous laugh.

We commence our drive home and my little guy is tired, and perhaps weary of the road, because in no time at all, hypnotized by passing scenery, he falls into deep slumber.

I have my routine in the evening, a couple glasses of wine with friends at a nearby restaurant, and it twinges my heart when my little guy tugs at my leg, begging me not to leave, and then, this ritual over, he waves at me through a window as I depart, and blows me a kiss goodbye.

He’s waiting for me when I return.

“Papa?”  He is standing at the top of the stairs, and when he knows it’s me, he comes sliding down, literally, by the seat of his pants.

Bedtime. Which means anything but sleep for my little guy.

“Let’s fight!” he says, a glint in his eye, his body twisting with boundless energy after he climbs on the bed and grabs a pillow.

And then we are at it, clobbering one another with pillows, and he especially delights in landing a pillow smack across my face and I react like a cartoon character, sounding off “boing, boing, boing” as I back up and crash into a wall.

By this time, my little guy is thirsty.  I twist the cap of bottled water and hand it to him and he raises it to his mouth and drinks with sound effects—glug, glug, glug—that make me laugh, and he says, “What are you laughing at?” and this makes me laugh even more.

Finally, my energy ebbing (while his still flows), it is time for a bedtime story.

“Five minutes,” he says.  (Everything is always five minutes with my little guy.)

And so, five more minutes of horsing around before we lay down for a story, more a dialog about a business project we’ve been devising between us in the preceding weeks:  our own restaurant, the Dino Dinerie.

The theme, of course, is dinosaurs, and we are in the process of refining our menu.

My little buddy has a great sense of humor, and we laugh with every new menu item.

After going through it a few times, my little guy turns on his side, and then he turns back to face me.  “Will you be here when I wake up in the morning, Papa?”

And I watch as his eyelids slowly dip… lower, lower, and lower… until they close… and my little buddy is fast asleep.

The Dude usually awakens before me.  He likes to place his face inches from mine and wait for me to open my eyes.

But on this morning, I awaken first and I feel him snuggled into my back.

I turn so that I may study his delicate facial features and thick jet-black hair while he is still asleep, and such a good sleeper he is.

But all I find is a pillow that somehow made its way beneath the bedcovers.

I look around and still I don’t see my little guy.

So I amble out into the hall, into the living room.

I check that the door leading to the garden is closed, and it is, so I gather he’s playing hide-n-seek with me, and I look around, but cannot find him anywhere.

“Who are you talking to?” I hear from my daughter, on high, in an upstairs bedroom.

Now I know they’re both playing a joke with me; he’s probably tucked into bed with her, giggling as I struggle to find him.

I head up the stairs and into their room.

My daughter is sitting up, bewildered.

And the nodding of her head turns sideways.  “Would’ve been.  Don’t you remember?”

“That’s when I had an abortion—about five years ago.”

“I was only eighteen.  You said I wouldn’t to able to raise a child so young, as a single mother. Don’t you remember?”

Feeling greater despair than I’ve felt my whole life, all I can hear is a little voice in my mind asking, Papa, where are you?

And I remember what my little guy said at the wishing well. I wish I were alive.

In March 2012, my eighteen-year-old daughter found herself four-months pregnant.

Her obstetrician scribbled the name and number of a late-term abortion clinic onto a notepad and handed the notation to my daughter.

We did not go that route.

I cannot imagine how life would be without my little guy.

I cannot imagine how I’d feel today if I had paid, to scratch from my daughter, from this world, my own flesh and blood.

This affectionate soul adored by dogs.

On this day of remembrance for aborted children, I honor and pray for all the beautiful souls that were not allowed to take their journeys through life.

Posted by Robert Eringer at 8:46 AM