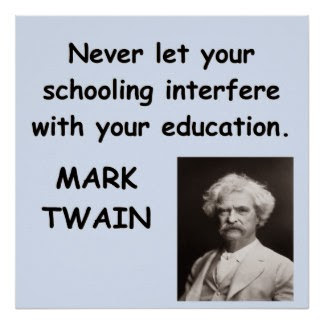 My father wanted me to get to know Mark Twain when I was about ten years old and even tried to bribe me into reading The Adventures of Huckleberry Finn (I’d ignored that particular school assignment), proposing a simple and straightforward deal: If I read Huck Finn he shells out five bucks for the LA Dodgers windbreaker I coveted more than anything else in the whole world.

I wouldn’t do it, couldn’t bring myself to do it, and I never did get the royal blue jacket with white felt embroidery, a garment that to this day gives me shivers of excitement when I see it worn.

Which means I never got acquainted with Mark Twain growing up (the bribe may have turned me off, plus I was more interested in comic books, my dad’s business as an illustrator), but I did it my way (as I always do). 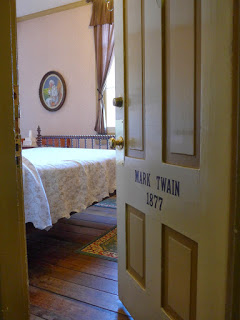 Indeed, my first road trip in the COW was with Van Stein to the Sierra Nevada mountains Gold Rush Country, which I dubbed When Money Was Real, ‘cos it sure ain’t no mo’, and celebrating St. Paddy’s Day beneath a full moon at Murphy’s Historic Inn where Mark Twain once slept.


I didn’t know the Sierras would be about Mark Twain until I got there and found Jackass Hill, the small wooden cabin Samuel Clemens shared with a couple of buddies for three rainy weeks in January 1865, panning for gold near a town called Angels Camp.

Young Clemens exiled himself—slinking, he called it—to the boonies as a result of feeling embarrassed and humiliated after getting fired from his job as a reporter at the Daily Morning Call in San Francisco for writing a piece of journalism— “Inexplicable News from San Jose”—way ahead of its time.

Almost a hundred years later, the New Journalism innovated by Clemens would be resurrected as original by Tom Wolfe, utilizing the same devices unique to literary journalism, including a gonzo style credited to Hunter S. Thompson if first conceived by Sam. 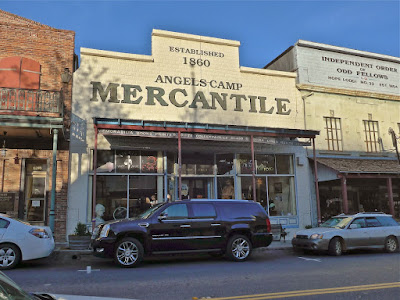 A shop called Calaveras Coin and Pawn in Angels Camp now occupies the site (then the Angels Hotel saloon) where Clemens overheard a prospector tell a drawn-out yarn (heard earlier by Clemens in a premonitory dream) about a contest involving frogs.

Inspired, Sam returned to San Francisco and wrote it up as The Jumping Frog of Calaveras County and, when it was published many months later in The New York Saturday Press under his new nom-de-plume, Mark Twain, he became a nationwide sensation, launching him to fame as a humorist and orator.

I’m standing at this very spot where destiny had manifested itself for a slinking Sam Clemens when a one-ounce gold coin from the U.S. Mint commemorating Mark Twain snags my eye, and I’m struck by an epiphany:

This guy is the Clubhouse on Wheels’ spiritual mentor!

Why else would my maiden road trip in the COW put me so near and dear to the ultimate travel writer of his time, so widely quoted in memes: 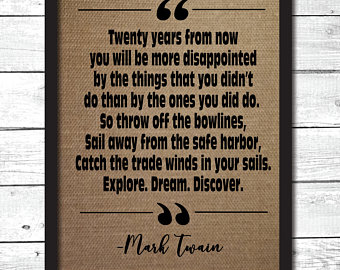 In gold I trust, so I bought the coin and carried it with me on road journeys thereafter for luck and, if necessary, as a get-out-of-trouble card.

After discovering Mark Twain in Gold Rush Country, I wanted to visit Hannibal, Missouri, where Sam Clemens spent most of his boyhood before going west to rough it.

On a trip to Kansas City a few years later, I had that opportunity.

In the meantime, I’d flown to London for my nephew’s wedding and stayed at The Langham, which, when built in 1865, set the standard for grand hotels in Europe—and became Mark Twain’s favorite. 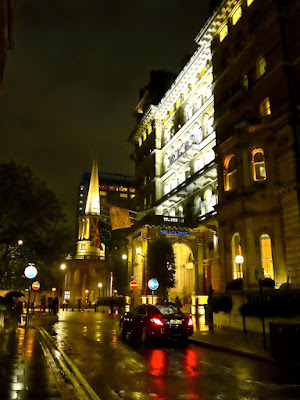 I booked the Mark Twain Suite but when I got there a plaque on the door said Chester Suite.

“I’m supposed to be in the Mark Twain Suite,” I called down.

An operator put me on hold, returned a minute later.  “We did away with Mark Twain.  It’s now called Chester.”

“How can you re-name Mark Twain?”

But she was already gone.

And no ghost either. 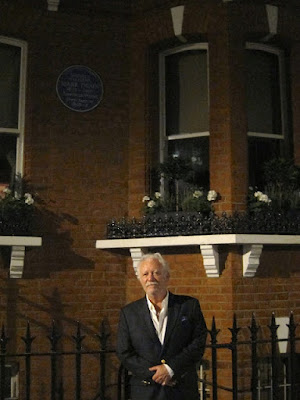 Not even at Sam's old London home, 23 Tedworth Square.

Fortified by Kansas City ribeye steaks and a good night’s sleep, we hit the road, arriving at Mark Twain’s birthplace in Hannibal... 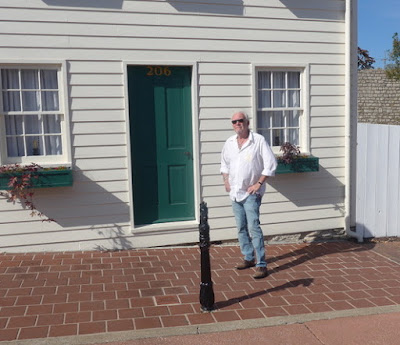 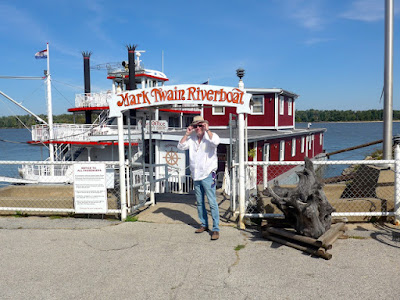 A stroll through the Mark Twain Museum is followed by an hour’s cruise aboard a paddle steamer down the Mississippi River, alongside Tom Sawyer’s Island.

When I was a kid my dad was able to get free passes to Disneyland so we would visit The Magic Kingdom two or three times a year, usually to celebrate birthdays, including my own. 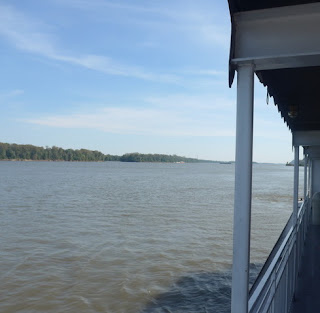 By mid-afternoon, with all the best attractions behind us, we would take it easy, which meant doing Mark Twain’s Steamboat to Disney’s version of Tom Sawyer’s Island where my father and brothers and I split into pairs and played ditch.

A connection, a memory, and an irony:  though I couldn’t be bribed by my dad to read Tom Sawyer or Huck Finn as a kid, here I am celebrating its author as spiritual mentor, on a quest directed by my dad in a dream, cruising past the real Tom Sawyer’s island. 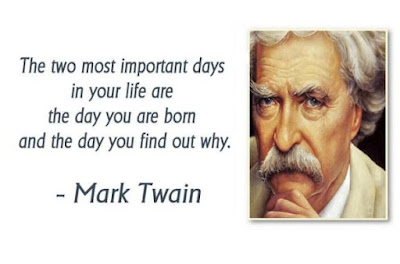 A couple years after Hannibal (as documented in this blog), I did a road trip that took me through Hartford, Connecticut.

I wrote at the time (as part of a manuscript-in-progress of an ongoing mystical journey): 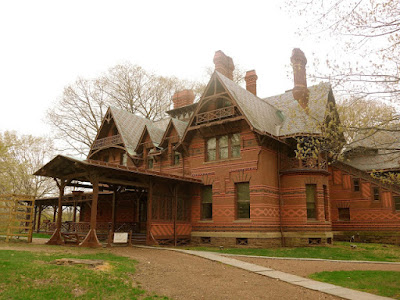 Here I am at the gothic castle Sam built in Hartford when that city teemed with writers and publishers, not insurance companies, gawking up at the house where Clemens spent his happiest days but ultimately caused heartbreak when his favorite daughter Susy died here, from spinal meningitis, at the tender age of twenty-four. 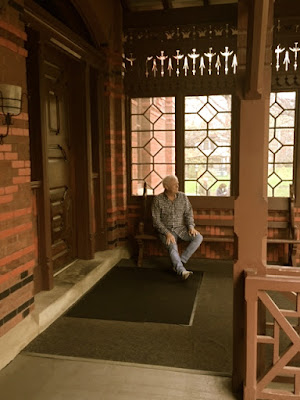 Sam was away at the time, resting in Britain after a worldwide lecture tour undertaken to buy himself out of bankruptcy, and that’s where he realized losing all your money is not the worst thing that can happen in life.

I set myself upon a bench on the porch where Sam once sat and where ethereal traces of he and his family remain. 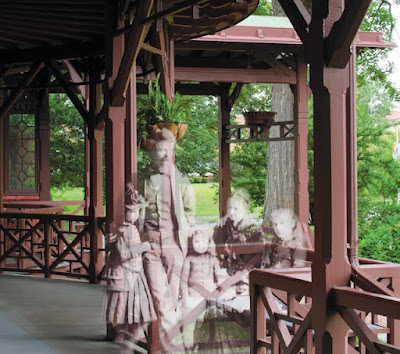 On this gloomy dank day the grounds are forlorn in an otherwise soulless city of actuaries and underwriters.

Posted by Robert Eringer at 7:25 AM

Robert Eringer
As a journalist, novelist, private spy, undercover operative and director of an intelligence service, Robert Eringer has enjoyed a wide-ranging career. Commencing June 16th, 2002 until December 31st, 2007, Eringer was spymaster to Prince Albert II of Monaco. After Prince Rainier’s death in April 2005, and Albert’s ascension to the throne, Eringer created the principality’s first (unofficial) intelligence agency, the Monaco Intelligence Service. It was killed by persons who feared what it uncovered. In 2016, Eringer returned to fiction with the publication of Motional Blur (Skyhorse), acclaimed by T.C. Boyle as “A nonpareil road novel that winds up packing a real emotional punch,” and Last Flight Out (Bartleby Press), a fantastical novel about traveling in time through photographs. Eringer's road novel Book Drive will by published (by Bartleby Press) in June 2021. He currently writes The Investigator column for the Santa Barbara News-Press.