VONNEGUT WAS BORN ON THIS DATE 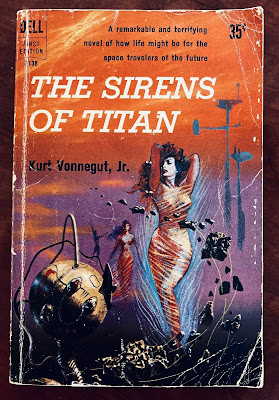 Kurt Vonnegut, Jr., is why I became a writer, and he became a writer because of Mark Twain, and they both believed, as Humanists, that the universe is a crock, and that humanity, as Vonnegut put it, is here just to fart around.

My favorite fiction book in high school was The Sirens of Titan, about which I scribbled into a journal on Thanksgiving Day, 27 November 1972, “Wow, that Vonnegut book is so weird.  It is one of the best books I’ve ever read… unbelievably fantastic… I’d sure love to have a discussion with Vonnegut someday.”

One could say that The Sirens of Titan somewhat awakened me to reading, thinking, learning.

Kurt Vonnegut was supposed to appear at the American School in London and talk to my creative writing class, an event I greatly anticipated and was crestfallen when he failed to appear.

I wanted to ask him the meaning of one is doubles.

(The principal’s staff whispered that he had been distracted by his mistress that dark drizzly day, or hung-over and, well, seeing double.)

Through our journeys in life, our paths (Vonnegut’s, mine) crossed twice, fleetingly, about ten years apart.

The first, in New York City, took place in 1988 after I’d lunched at a French brasserie with David Gernert, an editorial bigwig at Doubleday.

As Gernert and I stood outside Jean Lafitte on West 58th Street wrapping up our discussion, I looked left toward Avenue of the Americas and observed a familiar-looking figure weaving on the pavement toward us.

Is that…? I thought to myself.  “Is that Kurt Vonnegut?” I vocalized to Gernert, motioning with my eyes.

He turned and studied the zombie-like figure, and replied, “Yeah.”

As Vonnegut neared, I discerned that his eyes were low and glazed with booze, his footing unsure, and I whispered to Gernert, “I think he’s drunk.”

Although Gernert was a seasoned editor who worked with some of the best-known authors of the time, he was as awed as me by Vonnegut’s proximity to us.

I should have said something to Kurt, and with hindsight I know exactly what:  May I buy you a drink?  We could have gone into Jean Lafitte and, at its bar, gotten to the bottom of one is doubles.

The second time our paths crossed was at Crown Super Store in McLean, Virginia where Vonnegut appeared October 25th, 1997 to sign copies of his final book, Timequake.

Upon entering I discovered that a queue to reach him snaked around three aisles and I realized there was no point joining because the time allocated for this event would soon expire and Vonnegut’s temperament would not allow him to stay a second longer than commitment required, so I stood and watched from a distance.

He was animated that day, smiling affably for the occasional snapshot taken by a fan.

A few years after Vonnegut died (in 2007), I was on a journey from The Exorcist steps in Georgetown (Washington DC) to Salem, Massachusetts, chasing the devil with my artist friend Thomas Van Stein, when we impulsively decided to overnight in New York City and look up Vonnegut’s haunts.

We began by visiting Kurt’s last home at 228 East 48th Street, a brownstone in a neighborhood called Turtle Bay where he lived for a couple decades and died, a few days after tripping on his dog’s leash and tumbling down the front steps.

Vonnegut would walk Flour every day to nearby Dag Hammarskjold Plaza and set upon a favorite bench on which he would smoke cigarettes and read newspapers and stare inward hoping not to be recognized.

After visiting the park we searched for Vonnegut’s favorite restaurant with a few clues provided by an old British newspaper interview:  Italian, Second Avenue, walking distance from his brownstone, a Ralph Steadman drawing on the wall.
Pescatore seemed right but it was Spanish, not Italian. Their maître d’ pointed me to Lasagna, corner of 50th and Second.

Standing in the doorway, I could not see a Steadman drawing so I turned to leave and got interrupted by a swarthy man who tapped my shoulder and said, “This is the place—he came here every day, lunch and dinner.”

It was uncanny that he knew my mission.

“But where’s the Steadman drawing?” I asked.

“We re-did the place a couple of years ago.  It’s in the back office.”

“What did Vonnegut drink?”

“Do it.”  And I ordered his favorite meal too:  A Caesar salad followed by linguine, white clam sauce.

From Vonnegut’s table, Van Stein and I surveyed the scene.   “We should ask to see the cartoon,” said Van Stein.

Five seconds later, before we had a chance to ask, the manager appeared with the Steadman drawing, a caricature of Vonnegut himself.

“Usually he would come by on his own,” he told us.  “And he’d sit by the bar, back to the wall.  If anyone tried to approach he would raise both hands close to his face and wave them away.”

We ate solemnly, a kind of séance, seeking Vonnegut’s presence and counsel.

After dinner, we returned to Kurt’s brownstone in the dark.

But it was clear he wanted nothing to do with us, a pair of scruffy adventurers.

Death had not changed his desire to be left alone.

Posted by Robert Eringer at 6:13 AM