Why Christmas Celebrated on the 25th December? -- Christmas Customs and Traditions -- whychristmas?com

The Christ And The Buddha: How Can You Explain the Uncanny Similarities? | Ancient Origins 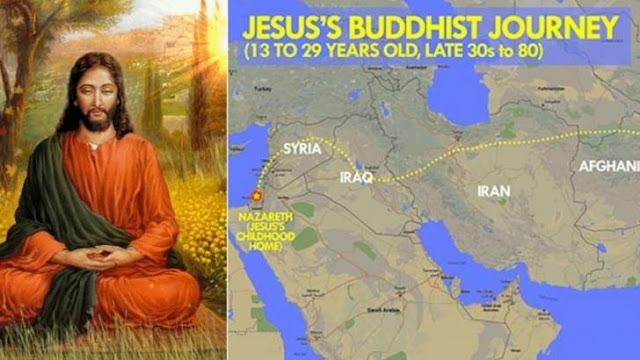 2.  Either in Alexandria, Egypt or Kashmir during his seventeen missing years, between the age if 12 and 29, Jesus was drawn to Eastern influences and tutored by masters.

3.  Jesus was most certainly a Buddhist, if not in name, in belief. (Even the Holy Trinity—mind, body, spirit or gut, heart and brain) derives from Buddhism.

4.  Jesus taught that the kingdom of God is about awareness and nowness (a Buddhist precept), subversive and universalist; Jesus did not espouse salvation i.e. reward versus punishment; on the contrary, unlike the Temple, he promoted joyousness in the here-and-now, through awareness.

5.  Jesus returned to Galilee and Jerusalem and preached the principles of living in the now; he taught that each person is a son (or daughter) of God (the Universe) repeatedly pointing out that people did not need clergy or temples to have a direct relationship with God. In fact, Jesus eschewed clergy and temples in favor of prayer/contemplation/meditation outdoors, in a natural setting, away from other people, in solitude.

6.  As such, Jesus stood up to deeply entrenched and very corrupt power structures, which retaliated by having him mocked and crucified.

7.  Jesus was resurrected from a near-death experience on the cross and secreted along the Silk or Spice Trail to Kashmir, where he continued his studies and teachings for several decades until his death.

8. The Greek Orthodox disciples created a new religion, Christianity, bestowing upon Jesus the monocle Christ, and the legends that followed were partly based on the Buddha-inspired pronouncements of their savior along with self-serving tales of mythological proportion to promote the growth of a burgeoning offshoot of Judaism.

I admire Jesus as an historical figure all the more for having survived the crucifixion and for having (unintentionally) pulled off the greatest ruse in history, leading inadvertently to the creation of one of the world’s most popular religions.

From my own personal standpoint, I stood up to a deeply entrenched and very corrupt power structure in Monaco, as the Prince’s intelligence chief and, while not crucified, I got slaughtered by a vicious Internet campaign (the new crucifixion?)

The concept of Resurrection is personal to me because of how I resurrected myself after soaring too close to the sun and searing my wings, an egoistic path that transformed into a spiritual journey.

The cross itself is not only symbolic of resurrection but, as an instrument of torture, represents surrender; a surrender to suffering; a surrendering of the ego so that consciousness is released in its purest form.

Because the real message from Jesus is this:  We are all sons (and daughters) of God, and to discover our inner Godliness we must rise above our egos; we must suffer as long as our ego continues to dominate our thinking, as a chattering monkey, and resist awareness of the divine within us all.

The mindfulness craze, the power of now… it all started with the Buddha. Those tuned into Buddhism in its purest form have been practicing mindfulness for 2500 years.

Ralph Waldo Emerson and Henry David Thoreau discovered, practiced and wrote about “The Eastern Influence” and their teachings reflect the tents of Buddhism.

A century later, Alan Watts, a philosopher and writer, and other Westerners, rediscovered Eastern influences and, starting in the early 1960s, midwifed meditation and mindfulness (along with mind-expanding drugs) into mainstream Western culture.

Buddhism is secular; it is a philosophy, not a religion; it is a communion with nature, and, literally, about being out of your mind. It is about noticing when your mind leans away from the peace, silence and stillness everyone can find once they become aware of their inner chattering monkey.

Having read and studied this in depth, I realize I am—should anyone ask if I believe in God—a theosophical Omnist with a bent toward Christian mysticism and the unfiltered teaching of the Buddha.

God is not localized or timed; it is always and everywhere.

Simply by being aware, one becomes a mystic.

In some mystical (non-traditional) way, one might even say this is where I found Jesus.

Posted by Robert Eringer at 3:56 PM