NAN: 118 YEARS SINCE HER BIRTH 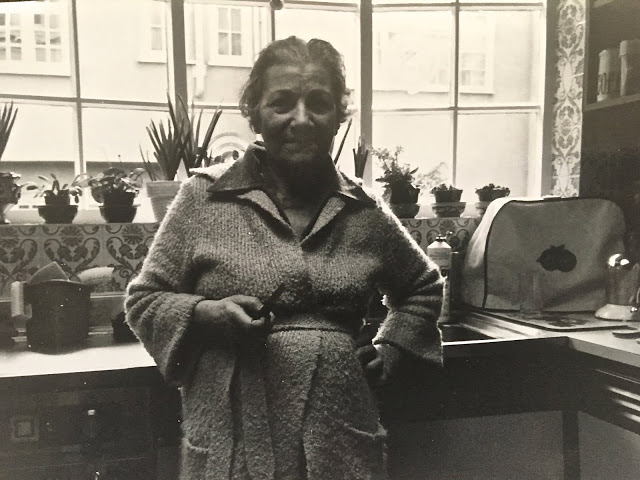 “Cup of tea?” she would ask, a master of the teakettle.

My elder daughter, as soon as she could talk, dubbed her Big Nan, and it stuck.

Nan’s eyes twinkled whenever any of her great-grandchildren were in her presence; she’d sneak them chocolate chip cookies.

One day I high-tailed out of London to set up a new life in the USA after earning parole from my family’s business.

I didn’t think for one moment I’d never see Big Nan again.  She was 85, but strong as an ox with fortitude and obstinacy that seemed greater than God’s will, and her Uncle James lasted well over a century.

We hugged near the front door, taxi waiting, a kiss on each cheek.

As she said goodbye to my wife and daughter, she looked ready to cry.

About six weeks later I returned to London for her funeral and slept in my old room at my parents’ house, which did not feel the same without Nan around to offer a cup of tea.  I could not sleep, but lay awake on my bed, gazing out the window at England’s dark purple sky.


Then I saw something I’d never seen before, though I’d yearned to see it all my life:  a shooting star.

Only a couple weeks earlier, at the Bhodi Tree bookstore in West Hollywood, I’d opened a spiritual book at random (bibliomancy) and, by mere chance, happened upon a line suggesting that a shooting star signified the death of a grandparent.


In my heart, I knew it was Big Nan's big goodbye.

Posted by Robert Eringer at 8:03 AM