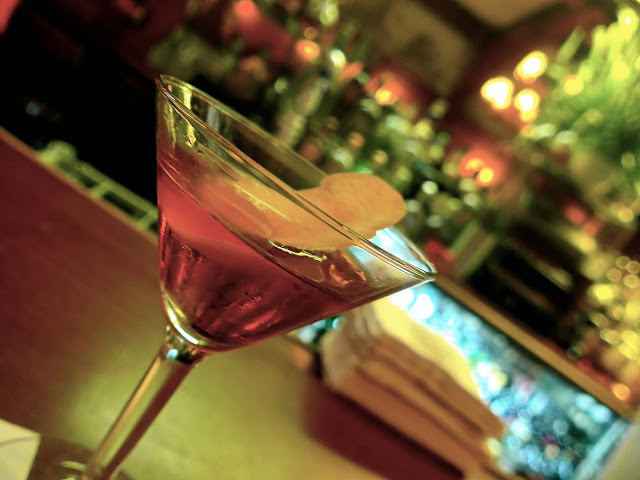 Okay, so I’m in a bar called The Raven, and it’s late, really late, and I’ve already had too much to drink.

But I want a nightcap, and a dusty old bottle on a top shelf next to Louis XIII Cognac is whistling my name.

So, I point it out to the barkeep and ask for a pour, maybe he’ll give me a splash on the house.

He is a rather serious factotum in a penguin suit, probably been serving libations from behind a bar—this one—his whole adult life, and since he looks about ninety, has seen it all.
“Which one?” he asks.

“That oddly-shaped, translucent bottle.” I point.

He follows my finger.

“No, no, no,” he scoffs, nodding his head. “That one is for decoration only.”

“I’ve only served it once,” he says.  “And that was very many years ago.” He shakes his head again, this time with an expression of sadness. “I vowed never to serve it again.”

This intrigues me. For a few seconds, anyway—until I realize I’m being set up for a hefty price tag.

“What does it cost?” I ask, setting myself up.

“It’s not for sale,” he says with a smirk.  “If I served you from that bottle it would have to be on the house.”

I reach into my pocket and place a twenty on the bar.

He eyes it. “My point,” he says solemnly, “is that this potion cannot trade hands for money. Not for the establishment, and neither for me.”

I replace Andrew Jackson with a U.S. Grant.

He looks at it, chuckles, and shakes his head. “No money can be exchanged for this libation,. An ironclad rule of the house. You sure you want it? I recommend against.”

I nod. “Seems like a great way to cap the night.”

“As in night-capped?” he says.

The barkeep pulls a portable step over to the right spot, stands upon it, steadies himself, and reaches for the old glass bottle, causing dust to loosen and cascade down to the floor.

He steps down, bottle in hand and plunks it on the bar.

“It’s not too late to change your mind,” he says.

“In that case, here are the rules,” he says slowly and deliberately. “You open the bottle yourself.” He turns around and reaches for a jigger and a snifter glass, plunks both before me. “You do this yourself while I tend to other things. In my absence, fill the jigger, pour it into the glass, and drink, if you must. I’ll return eventually.”

“Where are you going?”

“Everyone’s gone.” He gestures around the empty bar. “You are my last customer. We are closed. Except for you and your nightcap. Oh, and Mister Churchill.”

He points to a small alabaster bust of Winston Churchill, shelved between bottles of gin and vermouth. He saunters down the bar, stops, turns, and says, “I wish you good luck.”

As he disappears, I twist the cap off the bottle.

A new puff of dust rises and scatters.

I fill the jigger and pour it into the snifter, which I raise and sniff.

Tuberose with a hint of plums.

It tastes as it smells—and tingles with warmth as it slips down my gullet.

And then I feel it rising again, albeit as a gas, eructing as a gargantuan burp, which produces a puff of peppermint green mist.

I watch the mist in awe as it wafts upward to the ceiling, swirls, slow at first, then faster and faster until it resembles a tornado—finally swirling itself into solid matter: a rubber ball, orange in color, not unlike the liquid in my glass, that falls to the ground and bounces once, twice, three times, and suddenly explodes into…

Posted by Robert Eringer at 2:24 PM