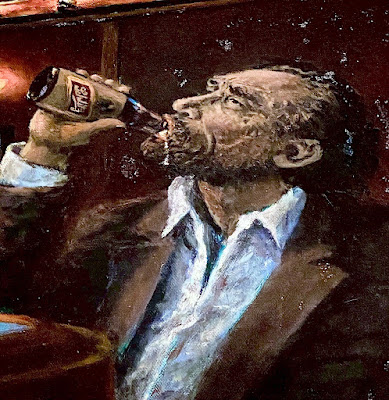 A scruffy scrapper of a guy stands before me, scowling.

His face is unshaven, pock-marked and ugly as sin.

And he has the torso of an orangutan—his shirt half-tucked into greasy work trousers.

“You can take my place,” I say, eyeing an escape route through the doorway around him.

“Nope,” he says, blocking my way.
I turn—and discover that Churchill has disappeared.

The new fellow lumbers over and takes the stool where the old gent had been sitting, and I re-rump my rear on mine.

The first thing this new guy does is drain the remaining gin Churchill left in his martini glass on the bar. Then he glares at me. “Where’s the f------ barkeep?”

He shakes his head in disgust, gets up, walks briskly around the bar—and just as well, I’m tired of serving and he doesn’t appear to possess the entitlement issues of those who came before him.

“So much booze, so little time,” he mutters in appreciation while reaching for a bottle of Jack. He fills a shot glass with the charcoal liquid, taps himself a beer chaser—and drops the shot glass of Jack into the beer. He looks up at me. “Never seen a boilermaker before?”

He lifts the glass and gulps it down, makes another, and reverts to me, pleased with himself. “Sometimes I drink to forget,” he says. “Other times I drink to celebrate. But tonight, I’m drinking to make something happen.”

He is intimidating; menacing, actually.

“I believe you. Chuck who?”

“Bukowski.” He glances around. “Is there a f------ dwarf around here somewhere?”

“Funny you should ask.”

“He comes and goes.”

“He promised me three naked broads.”

I shake my head, chuckling. “I suspect he makes promises he doesn’t keep.”

Chuck sucks it up, studying the shelves laden with bottles. “F--- it. I prefer my own company anyway.”

I eye the door, thinking maybe I’ll tootle on out and leave Chuck to his binge.

And quietly, oh so softly, I ease myself and tiptoe away…

I open the door.

I look down and see the dwarf looking straight up at me. This time he’s wearing a patchwork driving cap.

I look both ways, thinking maybe I’ll make a run for it.

But the dwarf slips in and pulls the door shut behind him.

Bukowski swings his bulbous head sideways. “F------ midget,” he mutters.
The dwarf climbs a bar stool, steps onto the bar and faces Bukowski. “I’m a dwarf, not a midget. What’s your f------- problem?”

“Oh, really? It’s not like you could do anything about it.”

“I could produce Miss Universe and you still wouldn’t get it up.”

Bukowski throws his beer mug at the dwarf, but the little guy, quick on his feet, side-steps it, and looks at me.  “Don’t worry, I’m used to it. Happens every time I bring this dumbass Neanderthal out to play.”

“That’s another thing!” Bukowski pounds his ham-hock of a fist on to the bar. ”I’m sick and tired of you bringing me out to entertain your friends!”

The dwarf points at me with a stubby thumb while addressing Bukowski. “Who said this fool is my friend? He opened the f------ bottle. And he ends up with you. Funny, no?”

“You haven’t had enough already?” The Dwarf taunts. “I’m not your f------ servant—get it yourself, dumbass.”

Bukowski rises from his stool and points at the door. “Outside, midget!”

The dwarf rolls his eyes. “We do this a lot,” he says to me out the side of his mouth. “He takes a swing, misses, falls down—and I kick him in the nuts.”

“Then why does he keep doing it?” I ask.

“Gee.” The dwarf puts a stubby by finger on his chin and looks up to the ceiling with one eye closed. “Why do you go to a bar and drink every night?”

Bukowski and the dwarf go outside and I sit in the bar all alone contemplating the dwarf’s words.

The old bartender lumbers in from wherever he’d gone and sets about clearing the bar.

He puts the strange bottle back on the top shelf next to Louis XIII, steps down to face me and says, with no small amount of droll, “Will there be anything else this evening?”

Posted by Robert Eringer at 7:58 PM