The Laugavegur and surrounding streets have become a cesspool during the wee hours.

I’d concerned myself with finding a urinal, six hours earlier, but the natives simply unzipped their flies, hosed the streets, and now it takes serious focus to avoid patches of frozen urine and vomit along the sidewalks.

I count twenty-two patches on one short block.

The picture windows of shop-fronts that are not shattered are cracked like elaborate spider webs.

Expulsion Therapy:  The release of bodily fluids to stave off anxiety and commitment to the local insane asylum, known as Kleppur.

Two cappuccinos served by Heidi at Café de Paris bring me back to life.

I am disgruntled with myself for allowing the runtur to put me to bed, not the other way around.  But I still have tonight.  And my sanity.  I think.

Back at Hotel Holt, Van Stein knocks my door late morning.  “I need coffee,” he begs, bags forming beneath bloodshot eyes, wisps of hair the shape of a butterfly looking for further lift-off

Floater appears; he, too, in need of caffeine.  We stroll to a bookstore café.

“After you left…” Floater is shaking his head, “we ended up at that Sirkus place.  Even PT Barnum and all the frigging Ringling Brothers would be amazed.”

“Yeah, they have a beach garden in their backyard,” says Van Stein.  “Sand and beach chairs and umbrellas.  Unless I was hallucinating.”

Had the Vikings really descended into a nation of gay blades?

But the owner’s son did not discriminate.  A nubile blonde female obliged him for a drink.

Says Van Stein: “I told her, Hey, I’d have bought you two drinks for one of those!”

“Caught that,” I say.
The National Gallery is closed, so we’re left with the Icelandic Institute of Phallology–a fancy name for giggle-stick gallery:  the only penis museum in the world, housing a collection of a hundred-plus wieners from whales, dolphins, seals, goats, sheep–and even a polar bear. 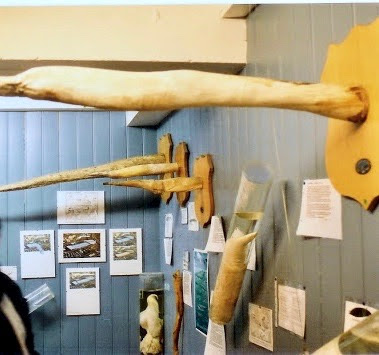 
We hoof back beneath setting sun, mid-afternoon.

“I will never think of the male anatomy the same, now I know what’s out there,” says Van Stein.  “I have been somewhere most people haven’t.”

“What did you make of the curator?” asks Floater.

Van Stein:  “What can you say about a guy who collects dicks?  Kind of cocky?  Broke the penal code?  Something very traumatic must have happened to this guy at an early age.”

It’s already dark by the time we reach our hotel.

Van Stein dons three layers for the profound mission before him... 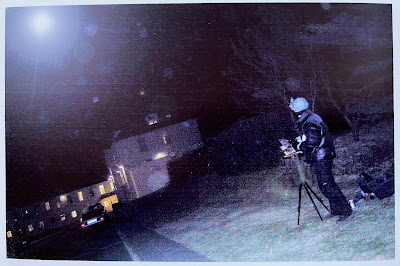 ...to paint Klepp Psychiatric Institute beneath a full moon. 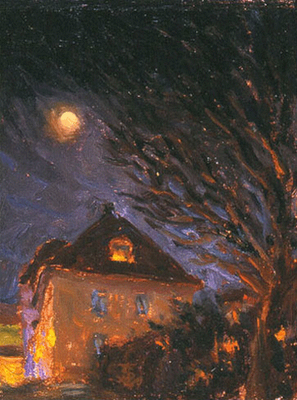 Posted by Robert Eringer at 6:01 AM