At seven o’clock in the evening, Thomas Van Stein and Erik the Red truck into Hotel Holt from the dark and cold. 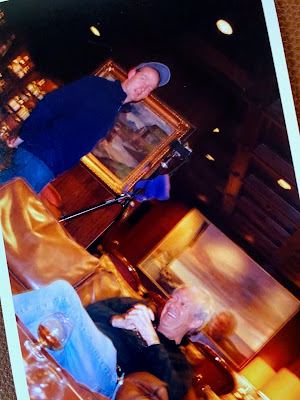 Floater and I are lurking in the lobby.

Erik shakes his head.  “You have no idea what we’ve been through today.” He says this with a Scottish accent thicker than usual because his tongue is eighty percent frozen.  He motions at Van Stein.  “Him, especially.”


The artist looks as if he’s been plugged into an electrical sub-station. His face is freeze-burned, hair frizzled, eyes ablaze with madness. He can hardly speak. 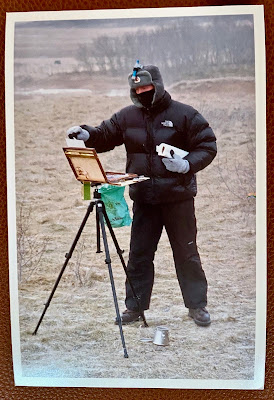 Kristjan, our driver/guide, nods. The King of Hardy himself is impressed by Van Stein’s indifference to the elements in his quest to capture nature at its most absurd.

One hour later, we launch on foot to a seafood restaurant called Vid Tjornina.

“I got kissed by the devil today,” whoops Van Stein, warming to candlelight on our table, drunk on accomplishment. 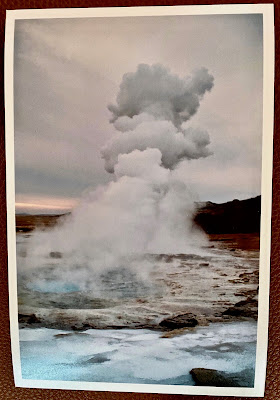 Erik the Red explains:  While Van Stein painted a geyser in sub-frozen conditions, the dang thing changed direction and slapped him hard before freezing to ice.

“It was the biggest blow of the day,” says Erik.


“In other words,” I say, “Thomas made a pass at a hot hole and got geyser-whacked?”

“Wait until you discover you’re pregnant,” I say.

“No,” I say.  “Forty-two fetuses.  When Rantanal Oldham [our eccentric London driver] hears about this, he‘ll insist on conducting a combination exorcism/abortion.”

“You want to know about hell?” Van Stein shudders.  “Kristjan showed us the Drowning Pool.” 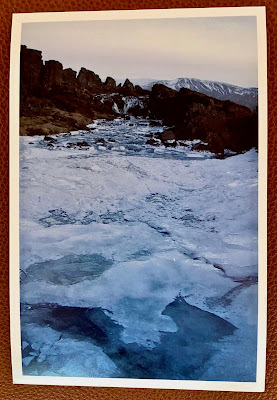 “The what?” says Floater.

“It’s a river out there, where the Vikings took their unfaithful wives. To drown them.”

“A perfectly acceptable ritual,” says Erik.  “I should have done that to my first wife when I found her in bed with my brother.”


“And afterwards,” says Van Stein.  “After they drowned their wives, there’s a geothermal spa nearby where they’d celebrate with a hot bath.”

That’s the way it was with Berserkers a millennium ago.  When foul weather postponed faraway forays of rape and pillage, one of them would get bored and slaughter his family for the sheer hell of it, and his friends would say, D’ya hear? Wolf the Unwashed went berserk yesterday, needs another woman.

We drink Chablis and order something that, in Icelandic, reads like dead pike smelling dyke.  And if that’s not enough, Floater’s small potatoes turn out to be rams testicles, part of a plot to Thorrablot him.

“So what did you guys do,” sneers Van Stein.

“You kidding?" I say. "While you were out watching Mother Nature fart sulphur and steam, Floater and I did the real work, laying down the runtur.   And that’s not all,” I add.  “We ran into that cultural attaché.”

“You mean the guy we wrote to before we left California?” says Van Stein.

Van Stein closes one eye, dribbles Chablis.  “But wasn’t he supposed to be out of town and that's why he wouldn't meet us?”

“Damn right he was. I caught the lying son of a whore at a place called Café de Paris.”

“There aren’t many Americans around here,” I say.  “Aside from a nutcase named Don who walks around this frozen country for kicks.  Anyway, this guy is obviously American in his navy blazer and L.L. Bean lined chinos and anorak.  And then I heard him say he works at the embassy.”

“Maybe my next wife.  For now, a waitress at Café de Paris.  The embassy guy tries to chat her up while his girlfriend is using the john.  So I ask him, where did the cultural attaché go this weekend?  And he says, I’m the cultural attaché.  So I tore him a new rectum.”

“I told him," I continue, "you foreign-service pukes are just a bunch of pant-load do-nothings.”

“He tried to ignore me.  So I raised my voice and called him a lying-son-of-a-whoremaster, right in front of his girlfriend, and everyone else. Everyone in Café de Paris applauded.  I don’t think they’re fond of Americans here, especially the ones who work for the government.  That’s when he got pissed-off.  Said he was going to fix me good, wanted to know my name.”

Van Stein turns to Erik the Red.  “You hear that?  This is what I get from him all the time.  He meets some mystery American in the hotel bar at the Lowndes Hotel in London and tells me I can’t come down to see who it is.”

“I didn’t say you couldn’t come down.”

Van Stein howls.  “So what happens next?” he asks.

“No, the cultural attaché.”

“When I get home, I e-mail the Snake Department and report what a do-nothing he is.”

“They promote him.  They prefer do-nothings, it‘s safer for them.”

The waitress asks if we need dessert.

“I’ll have the Devil’s Delight,” whoops Van Stein, reading from the menu.

“I thought you had it earlier,” says Floater.

“I want to reminisce.”

Posted by Robert Eringer at 6:35 AM