WHEN THE MOUNTAIN CAME DOWN 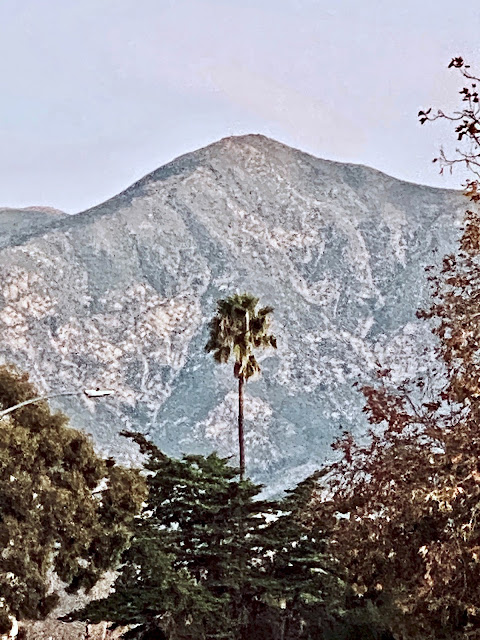 Approaching two years ago (Monday, January 8th, 2018) I got into bed and saw an extraordinary image on the ceiling over me.

I tried to find the source of projection that could  somehow explain its inexplicable presence but found nothing.

So, I grabbed my camera and snapped a photo, soon forgotten, given the dramatic events that would take place a few hours later.

At about 3:45 a.m. I lay awake, listening to the rain that pounded on my roof.

Suddenly the earth began to shudder.

This thought occurred to me:

On top of a torrential rainstorm, on the heels of a recent wildfire, are we now experiencing an earthquake?
I slipped out of bed, took a few steps to the glass doors facing north toward the mountains, and pushed the curtains aside:

A surreal night sky aglow in orange and yellow.

Even more astonishing, this glow illuminated an avalanche of muddy water rushing down my garden straight at me.
This was a real-life disaster movie a la Indiana Jones (and I wish I’d been wearing his costume).

I quickly turned and, after taking a mere few steps, dirty water smashed through the doors behind me.

Within seconds I was knee-deep in cold, slimy mud.
I grabbed my five-year old grandson (who had been camping out with me) and handed him off to his mother, my younger daughter, who moments earlier had awakened and looked out her upper floor window and seen, as I had, what looked to be an apocalypse poised to consume us.

Furry critters below (she later told me) frantically raced in all directions and up trees in their mostly futile attempt to escape a cataclysmic mud-and-debris flow.

All this was happening in the darkness of night, no lights to switch on due to power outage, bursts of lightning and thunder accentuating the eerie glow, which I later learned had been caused by a gas explosion that blew up several houses and took lives. 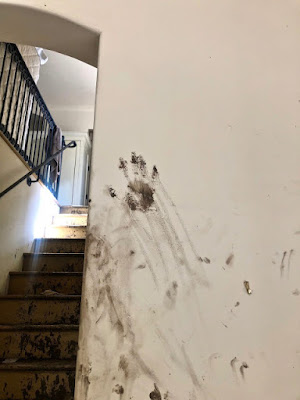 We were fortunate to have an upper floor suite in our home; many ranch-style houses in our neighborhood did not.

Moments later, a flow of mud and debris burst through the glass doors on the other side of the house, into the open-plan kitchen/living room, lodging sofas and armchairs and tables into the oddest of places while merging with the mud still flowing into and from my bedroom. 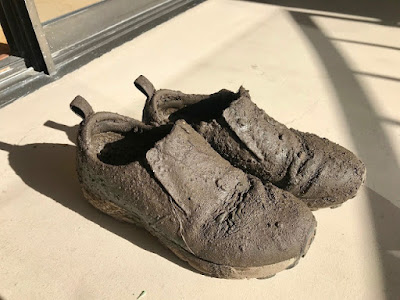 Dressed only in boxer shorts and a pair of Merrell Jungle Mocs I'd somehow managed to slip around my feet, I stood dazed and disbelieving, waist deep in mud and sludge.

One dog, having instinctively made a beeline up the stairs mottled in mud, was accounted for; one dog was not.

Armed with a flashlight, which quickly muddied and died, I waded through cold, slimy debris-filled mud into the foyer, living room and den searching for Lulu.

I thought I could hear her whimpering. 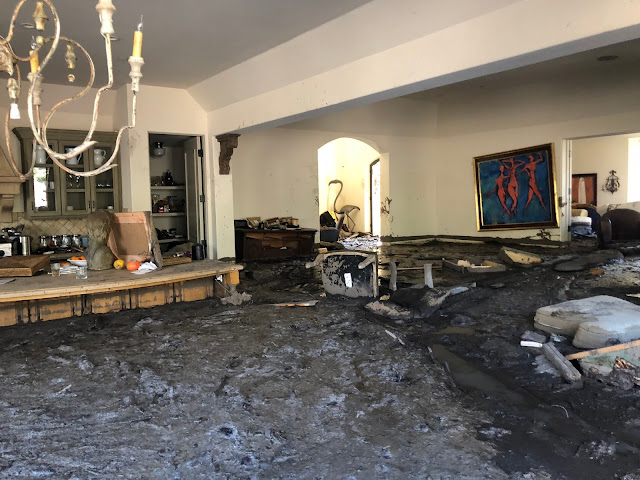 When the whimpers went silent I returned to the mud-filled foyer to try to open the front door, a presumed escape.

Wrong!
Of course, the heavy door would not budge as the rising, thickening mud pressured it to remain shut.

And good thing, because in my muddled thinking (and having no idea what was out there), trying to leave the house would have been the dumbest move of all—and quite likely fatal.

Because, had I managed to open the door, the resulting rushing flow of mud would have taken me to join a fifteen-foot river of debris and carry me a quarter-mile t0 Interstate 101, by then transformed into a lake, or further beyond to the ocean.

(A friend of mine, along with many others, suffered this horrifying fate by doing just that. She had to be identified by her fingerprints.)

Instead, I returned to the den to try to find Lulu.
After a short rest upstairs, I returned downstairs a third time, climbing over furniture, holding onto hope I would find her, in the process not realizing that my legs were being shredded by sharp debris; parts of trees or broken glass.

At one point I lost my footing, slipped, and became almost entirely submerged, just barely able to keep my head from going under.

Had that happened, I would surely have drowned in mud.
My grandson, all of five years old, was smarter than I; every time I descended for another look he tearfully cried out, “Don’t go down there!”

But I just had to try to find my dear little dog.
Ultimately, I had no choice but to call off my search and return upstairs, full of sorrow, believing that Lulu had been buried alive in her doggie bed beneath three feet of mud, maybe never knew what hit her.
Coated in the gooey stuff from head to toe, I got into the dark shower and turned a faucet.

No water. No power. Nothing.
My daughter phoned 911 and found their switchboard operator somewhat discombobulated—and inundated with emergency calls like ours.
Cell phone reception was sketchy, at best, but I managed to connect, after several tries, with my buddies Howard and Wally.

They immediately rallied (4:20 a.m. by then) and tried to reach us, getting only as far as Coast Village Road, the commercial thoroughfare, itself flooded and muddy.

Gaining access to Olive Mill Road (one of two ground-zeros) was impossible, they discovered.

That is because it was no longer a road but instead part river and part obstacle course of large boulders and fallen trees, and central to many of the fatalities that occurred.
But their presence was a blessing because they informed emergency crews already on the scene where precisely we were trapped, far more effective than a 911 call.

Though at this juncture no one could reach us.

The good news: no new mud surges; only the awful rosy-yellow glow in the sky that made no sense.

The bad:  Looking from the upstairs balcony onto the yard below, I saw only devastation as far as the eye could see.

Many of my favorite trees, including a fifty-foot pine, were simply no longer standing. (One had rocketed into the garage.)

A fire department rescue crew on foot eventually arrived and called up to us.

After ascertaining we were not in immediate need of medical assistance, they trudged off to tend to life-threatening emergencies within neighboring houses, and promised to return for us as soon as they could.

Cries for help could be heard, followed by the sound of jackhammers and chainsaws as rescuers (including a scuba diver) went to work freeing those trapped beneath trees and walls and caved-in roofs.

The Johnson family, our next-door neighbors, appeared, surreally, in our forecourt, which was relatively free of mud because my house acted as a buffer; had taken the hit from behind and kept the mud inside.

They hollered up to me, asking if they could remain in our forecourt until the rescue team returned.

It made no sense to me; none of it did.

I hollered back instructing them to access our garage, and the apartment over it—higher ground—which they did.
Augie Johnson had just pulled a toddler from beneath a car.

The toddler had been swept from about a mile upstream and become mangled in debris.

Augie removed mud from the child's mouth, got him breathing, and handed him to a fire chief that appeared on site.

As dawn broke, the rescuers returned, ready to evacuate all of us.

They entered from two parts of the house, axing their way in.
One of them hollered, "You have a little dog?"

I could hardly believe my ears.  “A little tan dog?” 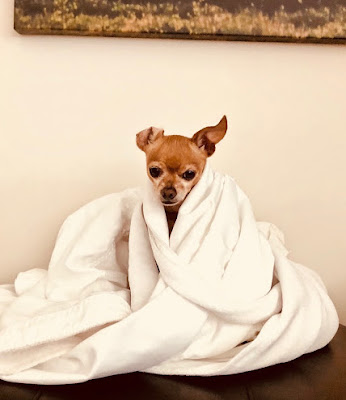 I had been grieving the loss of Lulu, certain she was gone forever.

She had somehow scampered onto one of the chairs or sofas wedged up against the wall.

Somehow, finding her made everything all right.

But there was no time to celebrate Lulu's survival, we had to move fast; the rescue team needed to get us out and get on with evacuating others.

They deftly configured our safest route, broke through an exterior window-door in a room less effected by the mud-flow and led our procession of family members and pets into a war-like wasteland.

What would normally have been a thirty-second walk down a country lane to a main road took a harrowing fifteen minutes as we carefully negotiated waist-deep pools of mud, downed trees and boulders; a zig-zagged path through unrecognizable terrain, past my neighbor's wreck of a house.
The river of mud from Olive Mill Road had by then emptied into what used to be 101, transforming that vital artery into a deep crater lake.

We were greeted by a slew of heavy-duty vehicles, lights flashing, engines humming; and overwhelmed rescue workers, who helped us into the backseats of a firetruck.

About ten minutes later, a flatbed cattle truck carrying survivors like us pulled up alongside.

Hoisted up, we joined them, standing shoulder-to-shoulder, shivering in the drizzle and morning chill, everyone covered in mud from head to toe, including a woman suffering from flu.
The vehicle lurched and rolled south on Olive Mill, leaving everyone aboard wide-eyed and aghast at the devastation around us.

A long stretch of ranch houses on the east side of the road had been ripped from their foundations, walls down, roofs collapsed; we could see clear through every house.

Cars, trucks and minivans had been pushed into hedges and wrapped around trees. 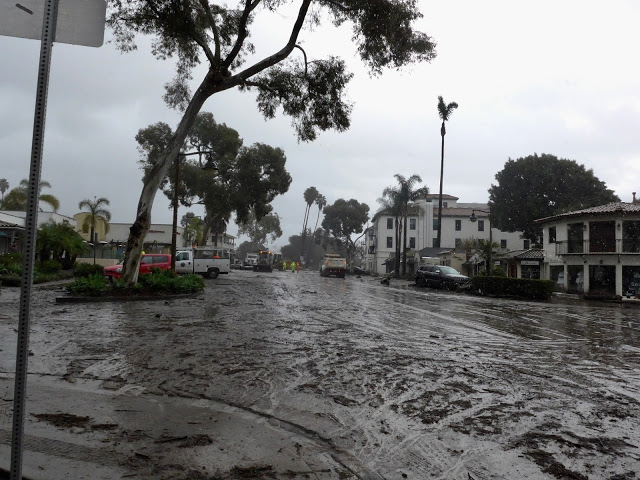 A strong smell of natural gas filled our nostrils as new survivors were led from the remnants of their homes to join us.

For the first time, it dawned on me that we were in the midst of a major natural disaster of life-and-death proportions.
The vehicle stopped twice more to collect survivors we managed to squeeze within the confines of the flatbed, along with their very grateful, very muddied pets.

Dogs that hitherto loathed one other, who had fought daily turf wars ferociously facing off at fences, were too shocked to defend property that no longer mattered and, in a bout of canine compassion, appeared delighted to reacquaint themselves with one another.

To avoid flooding and obstacles, the flatbed took various detours, finally grinding to a halt at the strip mall off Coast Village Road, near Montecito Mart.

A cappuccino would have been nice.
But, alas, on this dramatic morning even Starbucks was closed.
A few days later, I purchased a new laptop and uploaded photos from my camera.

And thus I rediscovered the strange image that had appeared on my bedroom ceiling a few hours before all hell broke loose... 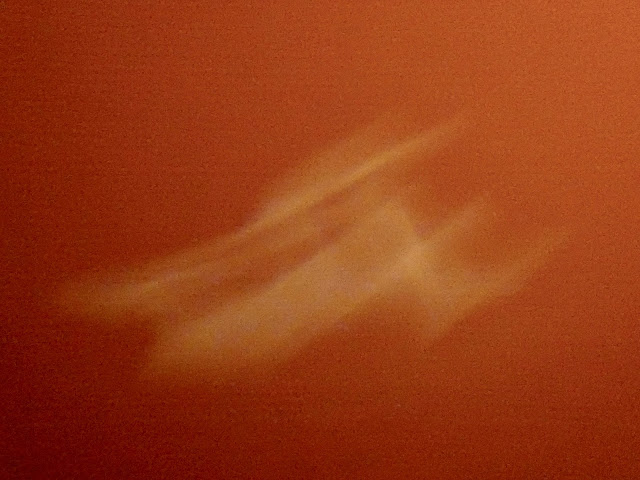 Posted by Robert Eringer at 3:21 PM