“Sunday in Reykjavik,” sighs Heidi inside Café de Paris, placing cappuccino in front of me.  “For us it means a walk or a movie.  Or a spa.”

In fact, the latter is what we’ve planned. 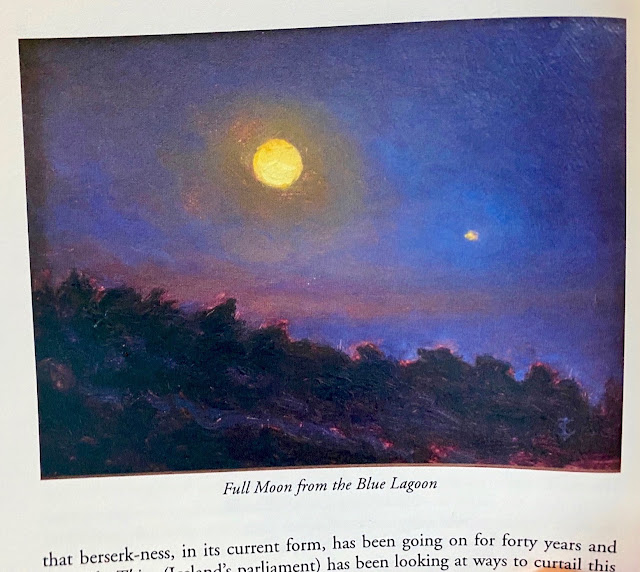 We join him at lunchtime, a seafood buffet, and I leave the guys at the lagoon, welcoming the opportunity to go one-on-one with Kristjan, our driver/guide, to fathom what’s beneath the icy surface.

As a forty-something father of three, Kristjan is happiest when alone in glacial wilderness exploring nature’s most astonishing landscapes.  For this guy, no place is too remote.  Even when he doesn’t have a paying customer, he goes anyway.  Every trip, he says, he sees something even more amazing than the last.

Kristjan’s father was one of Reykjavik’s toughest fishermen, never missing a day in freezing waters, no matter how strong a blizzard blew.  Fishermen would sit around a card table on particularly brutal days and wait for someone else to go first.  Inevitably, Kristjan’s father would rise and go out; the others would follow.

Although proud of his country and heritage, Kristjan acknowledges its flaws.

I ask him what the good burghers think about waking up to frozen piss and puke and broken glass every Saturday and Sunday morning.

He tells me that berserk-ness, in its current form, has been going on for forty years and that The Thing (Iceland’s parliament) has been looking at ways to curtail this collective catharsis.

To complicate matters, drug abuse is on the rise, despite strict penalties.

“I’ve only seen one police car since I arrived,” I say.

“It is a problem,” says Kristjan.  “Not enough police.”  His real pet peeve, though, is strip clubs.   “There used to be one.  Now, seven.  They bring in girls from Lithuania and Russia with five-week work permits, and rotate them.  It’s not enough, so strip clubs are now trying to recruit Icelandic girls.  They’re not interested.”

Tourism, says Kristjan, has doubled in five years.  “We have no room for more.”

An influx of foreign visitors is good for business, but Kristjan does not believe growing tourism is good for Iceland, whatever revenues it brings to his country or to him.

“Mostly American and German.  But now Japanese,” says Kristjan.  “The Japanese come only to see the aurora borealis.  I drive them out of the city, for three or four hours at night, looking for northern lights.”

“We don’t have dogs in the city anymore,” is all Kristjan will say on this topic.  (Further investigation reveals that Icelanders have a phobia about wormy dog poop.)

Erik the Red wants to inject his barmaid/aspiring model from Hus Malarans into our dinner plans, but I nix that after our experience over lunch at the lagoon, where Erik, demanding total attention, spun a series of new tall-tales about himself.

“If you want to take her out and impress her,” I tell Erik, “go ahead, but without me, I’m not a prop in your production.”

Says Van Stein, later: “You learn a lot about people when you travel with them.”

(Or, as Logliet once put it, “Lunatics always make themselves known.”)

When the three of us sit down for dinner at Naust, recommended by Kristjan, it feels like an anchor has been lifted.  No longer is every subject reeled in by one individual and evolved into its precise connection to him personally.

Keep your ideas of reference to yourself.

Instead, we revert to the kind of manic, spontaneous chatter that had so spooked those around us at Starbucks in Montecito.

Naust, we discover, is in Iceland’s oldest building, shaped like a ship with peepholes for windows looking out onto the harbor.

I opt for lamb in barbecue sauce, the best lamb I have ever eaten, before or since.

His next mission:  a trek with Kristjan to hunt northern lights.

“What must Kristjan think?” I say.  “Three Americans and one Scot visiting his icy country in bleakest winter.  One asks to see the local madhouse, another wants to paint it.  We’ve come, we tell him, to go berserk.  Imagine, if he is an informant for the Icelandic Intelligence Service, what must he be reporting back?  Two guys trek off to Geysir, one gets geyser-whacked.  What are the other two up to?”

“Exactly,” I say.  “Erik the Red hooks up with a barmaid.  Another diversion we’ve concocted?  Or maybe she’s an Icelandic spy, a plant?”

“She’s not really a barmaid,” I say.  “She’s a Russian spy.  Probably weaseled her way in on a temporary work visa, through a strip club.  The SVR has been using strip clubs to plant swallows throughout Western Europe.”

“But why would they be interested in… us?” says Van Stein.

I wink.  “Why do you think you were recruited for this trip?”

“Yup.  You’re the decoy.  They’re watching you go to strange places at strange hours while we do the real work in town.”

Van Stein looks around.  “Is someone watching us?”

“The Russians, for one.  But their swallow is too late, the job’s done.”

I lower my voice to a whisper.  “Our mission was to exfiltrate a Russian defector.”

“Get him out of here, to the USA.  Without anyone knowing.  He’d been smuggled into Iceland by boat.  He needed papers, a legend, and a false passport.”

“Remember my private drink in London?”

“This is all very secret,” I whisper.  “Assume the driver reports everything he hears to them.”

Van Stein bolts out the restaurant with Kristjan, energized by intrigue.

Floater looks at me long and hard.  “Is this true?”

“Of course not.” I chuckle. “Maybe it’ll convey into a decent painting.”

Floater shakes his head.  “You know, I can’t tell any more what’s true and what isn’t with you.  You really had him going.  And me, too.”  He pauses.  “I wasn’t kidding about the barmaid.  She really does speak Russian.  And she was asking loads of questions about you after you left today.”

We make our way to Kaffi Brennislan.

Two belts of Stroh rum, through-the-roof proof, by the picture window, watching natives mix it up.

Across the square, from a parked car, a Russian spy trains his binoculars upon us.

Posted by Robert Eringer at 6:25 AM