FEAST OF THORRABLOT: SHRINK-WRAPPED, LOOKING FOR A LABEL 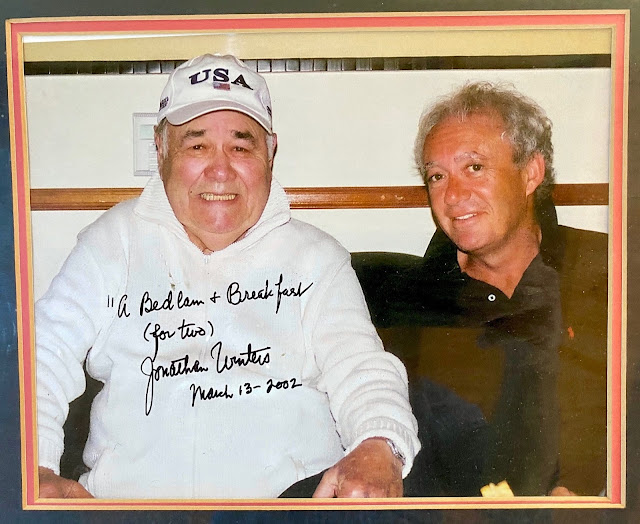 I run into Jonathan Winters on Coast Village Road in Montecito, tell him about going berserk in Iceland and also my plan to open an insanity-themed Bedlam Bar in London.  Would he sell me a few of his drawings to hang on the wall?

“London, huh?”  Winters unclenches his jaw, fixes his eyes into mine.  “I like London.  They get irony over there.  Everyone’s so square in this country.  Only six people understand satire, and that includes you and me.  Everyone’s in line here.  People in line are idiots.  I’m perpetually out of line.  When I was in a sit-com, every day was a new war, seven writers laughing at everything they‘d written.  I‘d tell them, it‘s not funny, and they‘d say, don‘t worry, we‘ll make it funny with canned laughter.  The people who make big money are one-dimensional.  They stick to one thing, that’s all they do.  Society likes that, rewards you for that.  That’s how society wants you:  slotted.   So now I paint instead.  Should I paint flowers or something nice?  No, I‘ll do what‘s in my head.  I wonder what the shrinks would say about Magritte and Dali?”  Winters pauses.  “So you want some of my drawings, huh?”  He glances around furtively.  “Can you pay cash?”

We meet that evening—Jonathan Winters, Van Stein and me—in the Montecito Bar.

“Some people think I’m crazy,” says Winters, leafing through more than three- dozen pen and ink drawings.  “That’s fine, I like it that way.  Whether I’m crazy or not is all the same to me.”  He winks.  “Main thing, I’m comfortable in my own mind.”

“That’s how we envision the Bedlam Bar,” I say.  “An asylum for the creative-minded.”

“Asylums are wonderful places,” says Winters.  “Everyone inside admits to being nuts up front, including the shrinks, so everything is out in the open, no pretensions.  If there’s a problem, it’s with normal society, where the crazies don’t own up, and even worse, you have to deal with sane people.  It’s easy to tell who they are.”  He looks right and left.  “They’re the ones in line all the time.”

We study Winters’s drawings, which are studies in out-of-line-ness.  “How do you know about asylums?” I ask.

“You kidding?”  Winters lowers his voice to a growl.  “I spent eight months in one of those places.  It was after my second breakdown.  I cracked, began to hallucinate.  Uh-huh.  That was back in 1962.  In those days there was no Lithium, no Prozac.  They sent me to Hartford, Connecticut, to a nuthouse called the Institute for Living  The scary part wasn’t the other whackos.”  Winters shakes his jowls.  “Them, I liked.  They just wanted to have fun, which society can’t accept.  It was the stuck factor that terrified me.  I’d never lost my freedom like that before.  Losing your freedom is a lot worse than losing your marbles.  Heavy gates.  Locked wards.  Patients screaming.  Can you imagine, calling a place like that an institute for living?  You’re locked in, Jack, and they’ve got the key.  No amount of money buys a ticket out–you’re stuck inside till they decide to let you go.”

“Yep,” says Winters.  “That’s exactly what I asked one of them fancy-pants shrinks after a month:  What is my label?”  Winters stares past me, from the part of his brain for which there is no return address.

In a voice that belongs to somebody else, Winters mimics, “I don’t want to give you a label.”  He resumes his normal voice.  “Why not?  I’m not psychotic. I’m not schizophrenic.  I could be manic-depressive.  I’ve made a fair study of mental illness.  I’m certainly not catatonic or we wouldn’t be talking, I’d be sitting here staring at you.  No, I’m shrink-wrapped, looking for a label.”

“He must have respected your understanding of this stuff,” I say.

Winters shrugs.  “Maybe.  But he still wouldn’t give me a label.  He told me I suffered stress.  Okay, I said, but I still need a label.  I’m paying for a label.  Let’s forget the label, he said.  All right, I said, let’s forget the twelve-grand.”

“I bet they didn’t forget the twelve-grand,” chirps Van Stein.

“You got that right.”  Winters smirks.  “After five months, the head shrink calls me in to see him.  He says, you have a lot of anger in you.  Sure, I had a lot of anger in me.  Mostly about my dad.  He used to call me the dumbest white kid he ever met.  When I took an art class, my dad said, ‘You must be a faggot.’  I once asked my mother–-she left my drunk father when I was seven–-why she bothered to have me, and you know what she said?”

I shake my head.

“She said she thought it was a good idea at the time.  A good idea at the time?”  Winters’s eyes bug.  “That’s heavy.  When I came home from the U.S. Marines, from the war, I looked everywhere for my old toys.  Couldn’t find them.  I asked my mother, ‘Where are my toys?’  She says…” Winters changes his voice to a falsetto mimic.  “‘Oh those?  I gave them away to the mission.  Who knew if you were coming back?’”  Winters glares at me and Van Stein.  “Who knew if I was coming back?  No wonder I had a lot of anger!  I’ve been buying old toys ever since!  My house is bursting at the joints with old toys–-and it’s a big house!  So, we’re sitting there, and Doctor Fimley says to me…” Winters alters his voice to a nasal twang.  “’We think we can do something about your anger.’”  Winters trembles, resumes his real voice.  “Made me all sweaty.  I knew what kind of something he was getting at.  Old sparky.”

“Shock treatment.”  Winters places both index fingers on either side of his head.  “Zzzzzzzzz-zap!”  He shivers.  “I did not want them to do that kind of something on me.  Nobody knew how or why it worked–-or what it took away.  So, I ask Doctor Fimley: ‘What are you erasing from me–-age twelve to seventeen?  Eighteen to twenty-four?  Which part of my mind are you going to zap clean?’  Old Fimley looked at me with a blank face.  He couldn’t say.  Because he didn’t know.  So, I said this to Fimley:  ‘I was in the war.  I know people in demolition.  If you do what I think you’re going to do, you will be visited.’  He laughed nervously and asked if I was threatening him.  No, uh-uh, I said.  Listen carefully:  ‘I know people in demolition.  You will be visited.’”

“So, what happened?” asks Van Stein.

“I never met old sparky.  Fimley knew I was serious.”  Winters retreats to the outer un-limits of his mind.

“How did you spend your days at the asylum?” I ask.

“My room was about ten-by-twelve, with a barred window that overlooked the front courtyard.  I could see the crazies come and go.  My roommate was a young man named Jimmy.  He served Uncle Sam at Anzio and his father was a big Cadillac dealer.  Jimmy’s dad committed him after Jimmy spent two months as a salesman and couldn’t sell one Cadillac.   I asked Jimmy, ‘How long you been here?’  Two years, he said.  That worried me.  One day, I was walking around the grounds, plotting an escape, and a guy jumps out from behind a poplar tree.  You’re that famous comedian, he says.  ‘Who me?’  Yep, he says, this is the only place where nuts feed the squirrels.  You had to like these people.  You couldn’t like them too much, though.  At a dance social, I squeezed too close to a woman who thought she was Marie Antoinette and they threw water on us.”

“But you eventually got out?” I say.

“Oh yeah.  They let me out after eight months, though they never did say what was wrong with me.  I wasn’t home an hour and the phone rang, a call from Stanley Kramer.  He wanted me to play a role in a movie he was going to shoot, about six months’ work.  I said, ‘No, I don’t think I’m ready yet.’  My wife overheard me and started talking.  She said…” Winters alters his voice to mimic his wife in falsetto.  “’You better take it.  If you don’t, they’ll never call you again.’  So, I did what she said.  And that’s how I ended up in It’s a Mad, Mad, Mad, Mad World.”

“Gee, boys, I never thought of it that way.”  Winters scratches his head.  “Ironic, huh?   After I left the Institute for Living, I stumbled, I fell. I didn’t stay down long.  I still have my problems.  I understand them.  Nobody has to explain them to me.  I’m living with me.  I’m not a cry-baby, not a wuss.  Lou Gehrig said, when he came down with that disease, I’m the luckiest guy in the world.  Well, so am I.  My dad once told me I shamed him by wearing a dress on national TV.  I said, ‘Well, you know, dad, with all my mental problems, I’ve done better than you.  We’re both assholes.  But I’m an international asshole and you’re just a local asshole.  John Frankenheimer called me a national treasure.  But you, dad, the big investment guy, you sold me Pan American Airlines, five hundred shares.  They don’t have airplanes any more, dad.  I may have been the dumbest white kid you ever met, but I made ten times more money than you ever did.”  Winters pauses, glaring at nothing, his eyes turned inward, focused upon his smoldering brain.  “When my stepmother called me to say my father was dead, and asked me if I was coming to his funeral, I said, ‘Hell, no—the bastard wasn’t there for me in life, I’m not there for him in death, no matter how happy the occasion.  Just make sure to bury him at least eighteen feet in the ground or that codger will find a way to crawl out.  And I don’t want a penny from him.”  Winters snaps out of a glower, makes eye contact with me.  “See any drawings you want?” 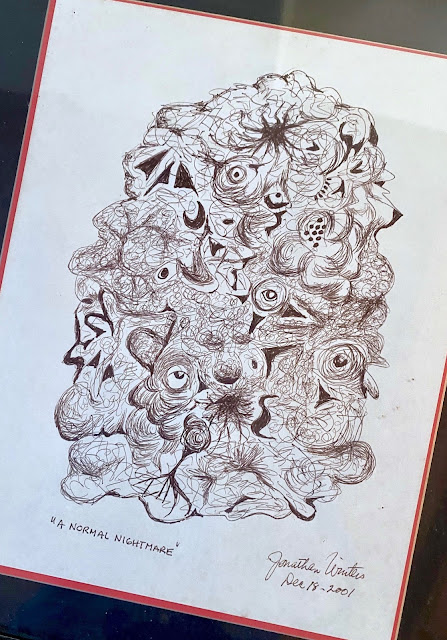 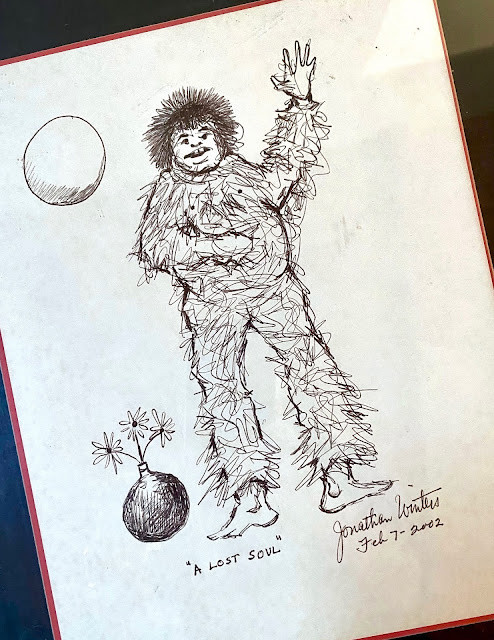 Winters counts the C-notes I hand him and consults a wristwatch.  “It’s a Franck Mueller,” he says with pride.  “Robin Williams gave it to me.”  He stuffs the cash into his shirt pocket.  “Now I’m going to give you two the best advice I know,” he says.

God has deemed us worthy of Jonathan Winters’ best advice!

“Life is a shit sandwich,” says Winters.  “But if you have enough bread, you never taste the shit.”  He rises to leave, turns, shakes his head and scrutinizes us.  “I don‘t know what the heck you boys are up to. But you‘re on the right track with this madness stuff.  Keep going.”

Posted by Robert Eringer at 5:54 AM