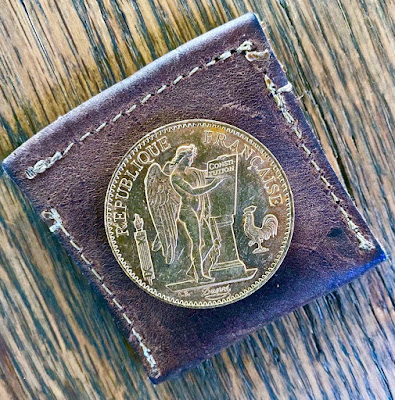 It takes time and careful consideration to decide upon the perfect flip coin.

And then it serendipitously shows itself: The Lucky French Angel.

Previously, I’d acquired a golden Mercury dime (which figures into flipism as conceived by Professor Batty in a Donald Duck comic book) after assembling a handful of other likely coins based on their symbolism or special magic.

But these are overshadowed by the legend, and legacy, of the beautiful French Angel.

This coin’s designer, Augustine Dupre, conceived his coin to be an amulet that offered protection, obsessed as he was with a belief in guardian angels.

It certainly worked for him.

Dupre was facing the guillotine after he fell out of grace with King Louis XVI.

In one version, Dupre used his own special coin to bribe a guard into setting him free. In another, a ray of sunlight that reflected from the angel coin in Dupre’s jail cell moved the jailor to tears and he allowed his prisoner to escape. In a third version, as Dupre knelt upon the guillotine awaiting its blade to do its dirty he rubbed the coin and a bolt of lightning struck nearby, causing postponement of his execution, providing time for a pardon.

Napoleon Bonaparte carried one in his vest pocket—and lost it the night before he got Waterloo'd.

By the mid-nineteenth century, French sea captains would not leave port without a gold angel coin in their pocket.

World War I airmen carried the Lucky Angel into battle, a tradition that continued with U.S. military pilots flying in Korea, Vietnam, and Desert Storm.