On the anniversary of James Dean's birth in 1931, time to tell this travel tale.

Our madness takes the artist Van Stein and me to Marfa, Texas.

To seek out the so-called Marfa Lights.

The Marfa Lights are said to be mysterious balls of luminosity first noted by Native Americans and debated ever since by metaphysicians and witnesses to this phenomenon.

It’s not easy to get to Marfa.

For us, from Santa Barbara, even after two flights we still need to roll 200 miles east on I-10, a lonely two-lane highway offering sand, brush distant mountains, and little else.

We ride with a pre-conceived notion that Marfa would be a half-horse town.  (The back half.)
Aside from mystery lights, Marfa is known–by those who know it–as the location where Giant—a movie starring Rock Hudson, Elizabeth Taylor, and James Dean—was shot in 1954.

It was Dean’s third and final movie, still in post-production when the rebellious young star smashed his Spyder sports car to pieces, killing himself (unintentionally), and rendering Marfa—where he’d spent his final summer—a minor-Mecca for obsessive fans. 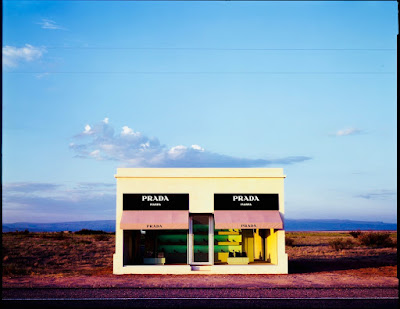 To our right, a Prada boutique with window display of expensive leather handbags and shoes.

“The desert is very powerful,” says Van Stein.  “It’s been known to play tricks on people.”

We roll into a new place and like to figure it out–but this is un-figurable; definitely not expected from a half-horse town.

You know you’ve entered Marfa—population 2,121—when you see a Dairy Queen.  Larry McMurtry, a famous author of cowboy novels, once said that Dairy Queens are the social centers of west Texas.

At the far end sits a large, austere building that looks like an historic insane asylum.

Ironically, it’s the county courthouse (pretty much the same thing).


On the left side of town is Hotel Paisano, where cast and crew of Giant billeted for six weeks.

We park, stretch our legs, wander into one of finest independent bookstores in the country.  Its coffee bar offers espresso, cappuccino and latte; or wine by the glass or bottle, fine wine, amid an eclectic collection of books, heavy on art and interior design.

For a half-a-horse town, Marfans are not short on erudite reading matter.

Too bad we are this shop's only customers.

“What portal have we come through?” I whisper to Van Stein.

He doesn’t have an answer and remains as puzzled as I.

We roll onto Hotel Paisano, retro architecture built around a courtyard.  The manager, a Marfan for over twenty-five years, checks us into a two-bedroom apartment.

“What’s with cell phone service,” I ask, noting that my cell phone isn’t getting any.

I discern a smirk.

“We don’t have phones in the rooms,” he adds.  “If you need to make a call, we have a courtesy phone over there.”  He points to a closet.  “But you’ll need a credit card.”

It is disconcerting to be out of contact with the world—a phenomenon known as nomophobia (as in no mobile—the British term for cell phone).  So, more than anything, I want a dry martini, Grey Goose, up, olives, dirty.

The hotel restaurant, Jett’s–after Jett Rink, James Dean’s character in Giant–has a horseshoe-shaped bar and, behind it, a smiley Marfa born-and-bred barkeep named Lorinda who stirs a world-class martini.

Van Stein and I clink martini glasses.  “To who-carism,” I say.

“You come here and go from You-carism to Who-carism.  It starts with giving up your cell phone, at first because there’s no service anyway, then by choice.  From nomophobia to nomo’nomophobia.  Akin to reaching the age of fifty.”

“How does that figure?”

“Like this:  When I turned fifty a year ago October, my brother took me out for lunch and told me a friend of his had turned fifty a few months earlier, and the friend said to him, ‘It’s great being fifty because nothing matters anymore.’  When you finally realize that—it takes half a century—and you travel through a portal into Marfa, you automatically qualify for Who-charismatic status.  On top of that, nobody can find me out here.”

“But what if they’re not even looking?” asks Van Stein.

I look him in the eye, another one of our marathon stare-downs.  “That would be most tragic.”

“So, what brings you guys to Marfa?” asks Lorinda, trying to coax us out of our manic dialog—or hone in on it.

Lorinda’s boss, also a native Marfan, asks, with pronounced nonchalance, “You from the government or something?”

I don’t like to announce my business to anyone.  If more than superficial conversation evolves, we’ll get there, maybe, give it time.  Plus, in this case, I suspect the locals are contemptuous of Marfa Light-seekers and I don’t want to get pegged a new-age truth quester.  Keep ‘em guessing.  But not with Van Stein around.  He lays it all out at the get-go.

“You ever see them?”  Van Stein puts the other foot in his mouth.

“I think I did once,” says Lorinda, indulging us.

“Say,” says Van Stein.  “What’s with that Prada shop down the road near Valentine?”

“No, uh-uh, it’s some kind of art thing.  They call it an installation.”

I’m not sure whether Lorinda thinks Prada and all its fancy wares are weird, in the land of Who-carism, or that Marfa Prada never opens for business.

“A lot of artists are moving here,” she adds.

“Some of the locals aren’t so happy, but it’s good for business.  Real estate prices have gone nuts because of people moving here.”

“Where are they coming from?”

“New York, Chicago, San Francisco.  They say this place feels like Santa Fe forty years ago, when artists moved there to get away.  There are about fifteen art galleries here now.”

In a town that has no pharmacy.

Epiphany strikes as pure Grey Goose vodka pumps through my heart:  Marfa is not about mystery lights.  And it’s not about James Dean and Giant.  It’s about art.  And not just any old art.  Minimalism.  Because life doesn’t get more minimal (in the USA anyway) than here in Marfa, starting with the loss of cell phone service.

“Donald Judd was first to arrive,” Lorinda continues.  “He came to Marfa in the eighties, really lived here.”

My knowledge of minimalists is, well, minimal, so Donald Judd does not register. 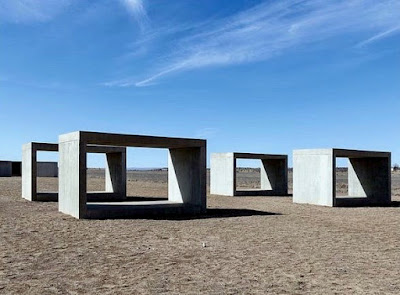 (Judd, I learn later, is famous for minimalist cube sculpture—mostly square and rectangular boxes in wood, stainless steel or concrete.)

A butch woman approaches the bar from a courtyard table to amend an order.

“I bet she’s not local,” I whisper to Lorinda.

Aha.  Artist in Marfa is partly code for gay.  This is less about pilgrims from New York and Chicago and more about the interior design crowd from West Hollywood.

But unlike wealthy Persian refugees, this breed does not raze original structures and build mini-mansions, as they did in Beverly Hills.  They lovingly restore simple adobe houses, maximizing every square inch into light and airy quaintness, no doubt using books from Marfa Book & Wine.

“The people who own that bookstore have a theater here, too,” continues Lorinda.  “A few months ago, an actor named Vance danced naked.”

“What people own that bookstore?”

“Their name is Crowley,” says Lorinda.

Related to Aleister Crowley, the Satanist?

“They’re buying up Marfa," she adds. "They live out of town, on a ranch, and don’t mix with the locals.”

“What should we eat?” I ask Lorinda, glancing at the menu.

Van Stein wanders through the courtyard, into the street, and returns to beckon me out.  “You’ve got to see the light,” he says.

The sun is setting and the pre-dusk glow upon Marfa is more magical than any mystery lights.  A Full Sturgeon Moon, big and fat and pink, like an overripe grapefruit, hangs above the rooftops and draws us up with its gravity as if we were the ocean.

May the pull be with you.

It’s tough to pull away, but we re-stool and feast on spicy tender flank and a good pinot noir.

When we’re done it’s dark.  We roll out of Marfa, past an old mill called Godbold, so ugly, it’s beautiful.

It is fairly new, Adobe Modern, with a panoramic of the Chihuahua desert and, beyond, the Chinati Mountains.

As odd as these lights seem, they emanate from cars cruising Route 67. Headlights are transformed by desert distance into something that seems metaphysical, but isn’t even as interesting as a mirage, or Marfa Prada.

The experts who know about these headlights—whole books about the mystery lights are available at Marfa Book & Wine—point out that they give genuine Marfa Lights a bad rap.

Nothing more in the forty-five minutes we’re watching.

Based on ideas of reference, if the lights truly exist, I’ll see them in the very short time I’m willing to look—and if I don’t, well, who-carism.

The only things out are jackrabbits, scurrying across the road, illuminated by our headlamps.

To them, we are the mystery lights.

Posted by Robert Eringer at 7:00 AM