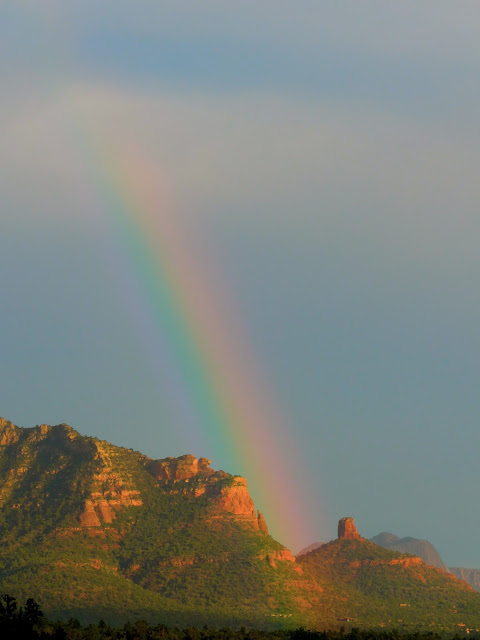 Santa Barbara to Phoenix Airport is a short hop, but a shuttle bus to its car rental depot takes almost as long as the flight.

I’d reserved a Hummer on the basis that if I’m going to meet my maker, I’ll meet Him in a Hummer.  But thirty seconds behind the wheel of this albatross is all it takes to understand the Hummer is a bummer.

“Just as well,” sighs Van Stein.  “They’re expecting us in a Hummer.”

Hertz switches without hassle.  “B-9,” says the rental agent, referring to the spot where a X-country awaits us.

“Hear that?” whispers Van Stein.  “Benign.  We made the right decision.”

What really matters is air-conditioning, because we’ve entered a firebox:  95 degrees Fahrenheit–and getting hotter by the minute.

It’s high noon by the time we commence our roll north on Interstate 17, welcomed by saguaro cacti stretching as far as the eye can see, both sides, a straight hundred-mile run.

A vastness, a timelessness—except that every local radio station blares Alice Cooper’s School’s Out and Led Zeppelin’s Going to California and Moody Blues' Tuesday Afternoon and Gregg Allman’s Midnight Rider–as if we’ve entered a time-reverse portal and gotten stuck between the 1960s and ‘70s.

Bell Rock looms up as we enter the outskirts of Sedona; a construction crew has kicked up a storm of red dust while widening the highway to better accommodate four million New Age pilgrims who roll in yearly to vibrate with the vortexes.

The basin, and what’s left of the fractured plateau–once, millions of years ago, a seabed—is red clay.

You walk on red clay, fill your lungs with it, become one with it.

The scenery is astounding. But the settlement is seedy: a sprawl of cheap motels and highway strip-malls mocking nature at its most awe-inspiring.

We pull into a strip plaza called Old Town, despite its newness, and get out to discover the climate at this elevation—4500 feet—is cooler than Phoenix.

My feeling–and I’m highly attuned to sensations, expecting any second to feel a tingling in the apex of my spine up to my cortex–is disconcertion.

This is the New Age Mecca?

We’re hungry; an organic supermarket with a café lures us past a woman offering fifteen minute massages on the pavement outside.

This town exudes a veggie state of mind, so I try to fit in and order the deli special:  A Vortex Veggie Sandwich:  Tomato, cucumber, shredded carrot, avocado and sprouts bound with hummus on seven grain bread.

There’s something odd about the locals behind us in line, serving us, watching us.  I cannot immediately discern what it is or why, but it disconcerts me further as the vortex veggie sandwich falls apart in my hands; what little reaches my mouth I wash down with fresh blueberry juice.

Somebody says something to Van Stein about his red New York City Fire Department T-shirt: Stay 200 feet away.  Natives seem to swarm around us in concentric circles, closer and closer.

My sandwich all but disintegrates as a man with paintbrushes stuck in his hatband takes a seat at the table next to mine.

“Let’s get out of here.” I drop the skeletal crusts of my sandwich.

We cut around to Ravensheart Coffeehouse, a moody den—locals clacking away at laptops.

The natives have a buggy look in their eyes, as if they’re assessing the flavor of our blood.

“I got it!” I half hiss, half whisper to Van Stein.  “They’re all bugs.  These are bug people.  Mutants.  Probably from breathing red dust all the time.”

A buggy barista brews the artist an Americano, scrutinizing us with bug-eyes.

“They’re attracted to your red shirt,” I whisper to Van Stein.  “I’m getting out of here.”

I take refuge in a cigar shop called Light-in-Up.  As I’m paying for two Hemingway Short Stories, Van Stein backs up to me.

“Don’t worry.”  I hold up the Arturo Fuente cigars.  “The smoke from these babies will keep them at bay.  But I’ll feel a lot safer when we get to our hotel.”  I turn to the cigar guy, who’s trimming our weapons.  “How do we find Enchantment Resort?”

“That’s way out there,” he says, “deep into the national park.”

The bug people watch us climb into our car.

We zip away, to Boynton Canyon, until stopped by a security checkpoint.  Enchantment is surrounded on three sides by steep plateaus, a natural fortress.

“Ah, Mr. Eringer,” says the guard, after whispering into a headset microphone.  He hands me a large laminated yellow pass.  “Follow the sign to the clubhouse, they’re expecting you.”

The gate rises.
I turn to Van Stein.  “What’s that about?”

“See, I told you,” says the artist.”
“But I thought they were expecting us in a Hummer?”

I shake my head.  “And why all the security?”

We look at each other, simultaneously stricken by the answer:  “Bug people!”

At the clubhouse, a guide named Pat waits in the forecourt, whispering into a microphone as we roll up. 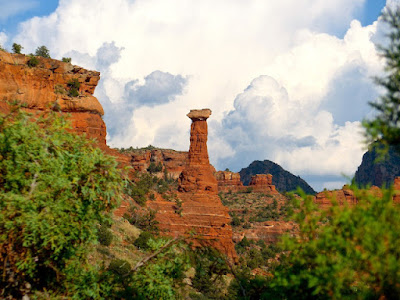 “Welcome!”  He escorts us to registration then tours us around the clubhouse.

“That,” he says, pointing from the terrace to Kachina Woman, a tower of red rock, “is the most powerful vortex in Sedona.”

Pat emphasizes that everything we need is within Enchantment’s grounds, other than cell phone reception.

“Cellular reception here in the canyon is zero,” he says.

I shrug.  No mo’ nomophobia.

Twenty minutes later we’re trekking through iron oxide and silica; an aroma of sage and jasmine.

We’re able to scramble two-thirds up a boulder adjacent to Kachina Woman, reputed to be a giant magnet where magnetic lay-lines converge and energy is highly concentrated.  (“Concentricity,” says Van Stein.)

Once up, gravity tugs at me, and I feel a need to grip something.  Wind whistles by. 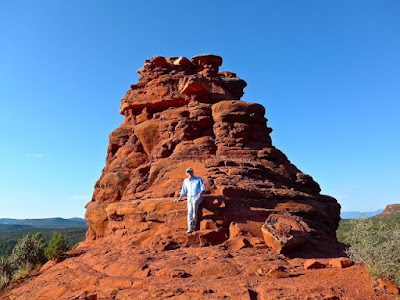 “I think God just spoke to me,” I whisper solemnly.

Back down, we hit Mii Amo Spa for shots of wheatgrass juice.

We stroll around, casting dispersions on its theme park ambience.

A bug-eyed woman manning a tourism booth casts a line at us.  “Where you boys from?”

I try to ease away, but her personal vortex reels us in so she can tell us how wonderful Tlaquepaque is.  Attracted by Van Stein’s red shirt, she wraps her buggy tentacles around him, and I use this opportunity to slip away, leave the artist to his fate.

Van Stein can chew fat with just about anyone, but after a minute he, too, flees, before she chews his fat.

“Oh my God!” he whoops, euphoric to be free again, blood un-sucked.

“This fakery is devils work,” I say.  “And I know which one, from our investigations in Florence:  Ticky-Tack.  You got the locals doing seedy suburban sprawl and the tourists getting their dollars sucked in a mini-Epcot.  Just another place to go, get relieved of your dough.”

Next:  Air Mesa Vortex–said by those who specialize in such things to be the strongest of Sedona’s four vortexes.

We cruise Airport Road.  The red rocks are infested.  Not with bug people, but with visitors who, like ourselves, are hoping to catch a psychic vibe or two.

We pass the vortex for a look at the small airport, utilized by private planes and Grand Canyon air tours.

“What the hell are those?”  I point to three tall communication towers of the variety used for eavesdropping by the NSA.

A dirt road leads us to a desolate building near mesa’s edge, and this  sign:  Central Arizona Lodge # 14, Masons of Verde Valley, Arizona.

“I knew it!” hoots Van Stein.  “The Freemasons are behind everything.”

Behind the temple is a fenced-off area warning trespassers to avoid their “radio frequency environment”—or risk radiation poisoning.

Freemasons are generating the vortexes?

We roll back to the red rocks, park, and trek upward.

“Not even a stomach rumble, and that’s surprising because my stomach got vegetated from that vortex sandwich.”

We course around the trail until we finally see it:  Cathedral Rock–not just any old vortex but the most photographed sight in all Sedona.

“That’s what I’ve got to paint when the blue moon rises tomorrow,” says Van Stein.

We cruise back into Old Market Place, where an infestation of bug people swarm around a jazz band playing outside Schezuan Martini Bar.  Their attention swings from jazz to us.

“They smell blood,” I whisper to Van Stein.  “We need to either light our cigars or get the hell out of here.”

We opt for out: a return to our secure resort for Mahi Mahi tacos and Hedges cabernet beneath moon, stars and intricate chemtrails, followed by the  smoking of cigars outside our casita to ward off whatever bug people might penetrate Fort Enchantment during the night. 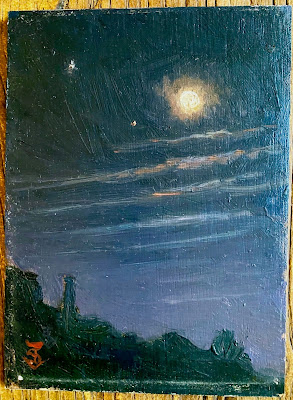 Van Stein erects his easel on the observation deck to paint the moon high above Kachina Woman, blessed—as we are, this night—by a whole alphabet of moon gods and goddesses, from Artemis to Yarikh.

Posted by Robert Eringer at 5:59 AM