Sometime during the night—in the total blackness of my room—I am jolted awake by a burst of electricity.

Half-awake from the charge, I feel a tingling in my left hand, as if circulation has been cut.

I try to shake it off but the tingling morphs into a fierce swirling storm beneath my knuckles, moving slowly, clockwise, from left to right.

This tornado is halfway across my hand before I tweak to what’s going on:

Vortexed by metaphysical shock treatment!
I allow the sensation to play out.

When it reaches the base of my thumb, the twirling electrical current turns and reverses, motioning the other way under my knuckles, counter-clockwise, until, very slowly, it fades and disappears.

The whole episode lasts about a minute.

I bolt from bed at six in the morning, fully charged, ready to red-rock and roll, while Van Stein stumbles around his room reassembling art accoutrements.

“Metaphysical Electro-Shock Therapy.”  I hold up my left hand.  “What would you call a vortex in your hand?”

“It’s the pewter angel,” says Van Stein.  “I want to sleep with it, too.  Did you say left hand?  In metaphysics, that’s significant.  The left side is the feminine, receptive side.  Energy travels from left to right.”

“And afterwards I had strange dreams,” I say.  “One featured crystals.  Remember Erik the Red from Iceland?  I dreamt we’re climbing up a staircase and Erik is on his way down, looking bug-eyed.  He passes us, I turn around and say, ‘Erik, is that you?’  He turns and looks at me blankly, and says, ‘Do you have any crystal meth?’”

“Sounds like someone’s mesting with us,” says Van Stein.  “It must mean something.”

“Yeah, I think it means steer clear of tequila.” 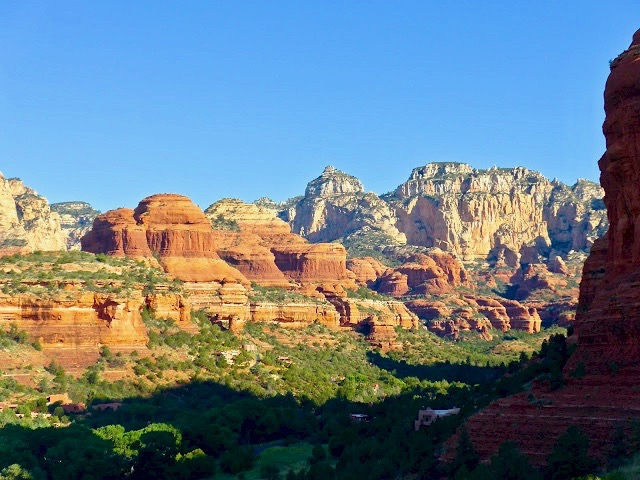 I am struck with either red rock fever or a Gheelization:

Planet earth is a living organism.  God is the earth.  His name is Ruber Ram and he lives in Sedona’s red rock, hence this mantra:  Ruber Ram Resides in Red Rock.  His throne is Cathedral Rock.  Through the Vortex He comes out to play.

The devil, which lives where you’d least expect him, in the freezing cold of Iceland, is Niveous Nillo.  We should have suspected this when he whacked Van Stein from his nostril. (Geysers are said to be the nostrils of Satan.)

Here’s the kicker:  Ruber Ram and Niveous Nillo are the same Supreme Being:  Godevil.

Now, how does that work?

Here it is:  The Supreme Being is mentally disturbed, suffering from schizophrenia.

(How else can you explain the mess we’re in?)

Niveous Nillo is Ruber Ram’s alter ego, his other personality.

Ruber Ram puts up with humankind because He created water to sculpt Him a home out of red rock.

Water is the very basis of life, which was created inadvertently from water, and which began as sulphur-eating insects–a harmless “good” bacteria–-that evolved over millions of years into a dangerous germ that is suffocating, clogging and killing the organism upon which it feasts and fouls.

Ruber Ram’s alter ego, Niveous Nillo, is not so accepting.  He causes calamity, famine and war in a bid to save earth by eradicating human life.

Godevil once had a third personality. She resisted against the creation of water; asked to be cast off to exist without water—and, by extension, life.
That would be Luna, the moon.

When Luna fully shows herself each month, mammals instinctively remember her lunar rebellion.

It compels canines to caterwaul.

It turns many humans mad.  Hence this term:  lunatic.


The gravitational pull is Luna trying to suck all the water from earth each day.

And thus, the Cult of Luna-seeking is born.

Posted by Robert Eringer at 6:20 AM