Van Stein is already up and out painting a landscape when I awaken at 7:30 next morning.

We re-group for bowls of berries and wheat bran, and set out for Cathedral Rock where the artist scouts angles for tonight’s painting while I stroll Oak Creek pondering the power of water, which shaped these rock formations.
Even with morning glow upon it, Sedona’s downtown suburban sprawl disgraces the natural setting USA Today once called the most beautiful place in America.

“God may reside here,” I say.  “But Ticky-tack is taking down the neighborhood.”

Next: uptown Sedona, where the crystal crowd is encamped.

“Woo-Woo-ville,” says Van Stein with disdain. “Spiritual arrogance.  This is a carnival.”

We park and almost immediately get sucked into The Crystal Vortex, one of numerous shops hawking palmistry, aura photography, and crystals in all shapes, sizes and colors, presided over by two smiley metaphysicians.

One, a Dolly Parton look-alike, photographs Van Stein’s aura then offers to raise his chakras while I’m scavenging twaddle and bunkum mass-produced in China, striving to uncover just one authentic talisman worthy of purchase.

I find it, not upon the shelves, but in the Kirlian photography room where I pose with my yellow-green aura:  an angel, crafted from pewter, palm-size. 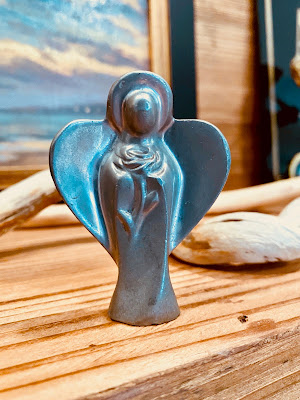 The German woman capturing my aura says a tentative yes on the basis that everything is for sale in Woo-Woo-ville.

She checks beneath its base for a price tag but there isn’t one.

Dolly Parton tries to sucker us into palm-readings (“I did seventy-five in one day!” she says) and we use all the psychic energy we can muster to extract ourselves from The Crystal Vortex to bake, once again, beneath hot Sonoran sun.

“All these folks have OD’d on crystals,” I say.

“And crystallized,” adds Van Stein.  “Let me see that angel.”

“Wow.  I hope you realize you’ve liberated this angel from the suckiness of that crystal vortex.  She will be grateful, eternally.”

“There’s something else we need,” I say, assessing the many shops on Woo-Woo Street.  “Rainbow moonstone.”

"I’ve heard of moonstone,” says Van Stein.  “But what's with the rainbow?”

“Moonstone is white and translucent,” I say.  “Rainbow moonstone is the same, but with a blue flash.”

The few rainbow moonstones on display have been crafted into kitschy pendants and bracelets. 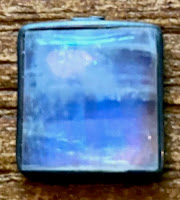 But I find a non-kitschy memento:

A rainbow moonstone cut into a perfect square, slightly smaller than a postage stamp.


Woo-Woo has made us hungry.

The Full Moon Saloon turns out to be a tacky dive in a strip mall, distinguished only by a life-size howling coyote statue.

Next, the Blue Moon Café:  We walk in, uncertain–another greasy spoon?

If you’re a cockroach.

Not once in a blue moon, not ever, thank you very much.

Instead, back to Woo-Woo-ville for cheese enchiladas, refried beans and Corona with lime at Oaxaca, hold the crystals.

Before returning to Fort Enchantment, Van Stein wants to stop at Art Mart, tucked within another hideous   strip mall.  This turns out to be a venue for wannabe artists, with all the charm of a Costco.

“Bad, bad, bad.”  I shudder, keeping one eye peeled for bug people.  “This stuff is three notches below schlock.  But I see what’s going on.  These talent-less folks have run away from home, like that poseur with the paintbrush in his cap at the organic supermarket. They set up here then write back to family and friends saying their art is appreciated in Sedona—exhibited and marketed for sale.  Woo-Woo.”

Back at the casita, I drop my bones onto a sofa in our casita and fall into a snooze so unusually deep that when I awaken forty minutes later it takes another ten to regain complete consciousness.

It’s 5:33 and the sun is still two hours from setting, a blue moon scheduled to appear on the horizon at 7:49 precisely.

I drop the artist on site, with a plan to collect him at 8:33 sharp.

This is the artist’s time alone with nature, with the vortex, to capture the unusual forces at play.

For me, it is time to follow the advice of a vortex book I’d picked up at a local bookstore.

Its message, essentially: Sedona, all of Sedona, is one big collective vortex.

So, the thing to do is choose a spot where you feel most comfortable for contemplation.

My spot, I’d already figured, is the open-air terrace bar at Fort Enchantment—serenity unspoiled by the swarms—cocooned within Boynton Canyon Vortex, a view of Kachina Woman. 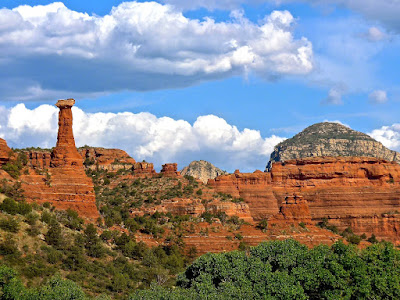 It feels appropriate to drink something indigenous to the region.

Thus, I sip silver peyote juice from a martini glass, its rim coated with salt, while scribing these notes into my leather-bound journal:

This isn’t one you’re supposed to work at; you’re supposed to slowdona (from a local tee-shirt), choose a spot that best reflects who you are. My favorite contemplation mode is with a cocktail or a glass of wine all on my own, nobody to talk to, and nothing to read, just my thoughts and me.  Sitting on this terrace at dusk, watching for a full moon behind red rock, a buzz of people around me, I’m the only one alone.

Then, over a glass of Buena Vista chardonnay, it hits me–bang!

The hitherto elusive moniker that most accurately depicts what we (Van Stein and I) do:

Driving back to Cathedral Rock, the moon has still not shown its face over the canyon walls but I know it must be just around the bend, hanging with a lower horizon. Halfway down Dry Creek Road, there she is:  a giant orange moon, brightening the night sky with a passion.

I park, get out, wander toward Oak Creek.  It is dark, very dark. Van Stein whistles.  I turn around to see him near the car.

“Are you trying to moonpsyche me?”

At that very moment, the moon ascends behind Cathedral Rock—a most awesome spectacle.

We approach the creek; toads croak around us.  Somewhere, in the distance, something howls.

Our family of orbs have come to dance in the dark vortex–with a new friend:  a large red orb.

We drive to Fort Enchantment, moon rising, accompanied this night by Jupiter and Antares, the 16th brightest star in our galaxy.

Moon-bathing on the terrace of Yavapai, a waitress serves us Tasmanian salmon with dandelions in mustard sauce.

“I think we need to start the Church of Luna-seeking,” I say.

“While you were painting, I did the real work:  tequila and contemplation.”

“It’ll have to be a cult,” I say.  “All religions start that way.  But aren’t we supposed to have turbans or tee-pees to get a license for this stuff?”

“I don’t think they issue licenses for what we do.”

“Isn’t that how this all started?”

“No, but it greased the action.  The Moonbeam Bar.  Cult headquarters.”

“Do you need a lunakey to get in?”

(We would later design such a "key," crafted by Daniel Gibbings of Montecito.)

I raise my glass of Ridge Geyserville.  “Many moons.”

Van Stein clinks his glass with mine.  “Moonacy!” 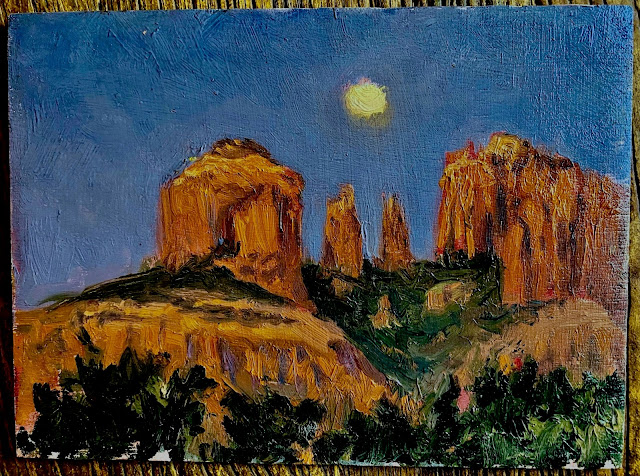 Posted by Robert Eringer at 5:57 AM