Upon our return to Sils Maria, sunny blue skies have given way to low dark cloud and drizzle.  We check into Hotel Waldhaus—top-floor rooms with grand views of lake and tall peaks.

Nietzsche Haus opens at three o’clock and we are punctual.

I enter first, a quick right turn into reception, face-to-face with the curator, an attractive young woman, tall and slender with chocolate hair and banjo eyes.

“We’re here for Nietzsche,” I announce.

“You’re too late,” she deadpans.

“I live here, I haven’t seen his ghost,” she says, seeming to understand our quest.  “Pooh.”

The artist sets to work with his camera. 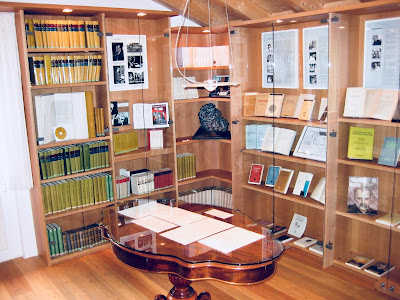 It takes all of three minutes before Nietzsche’s orb appears in the library, hovering near the ceiling.

Fritz’s bags were packed, ready to go—very orbanized—like, what took you guys? 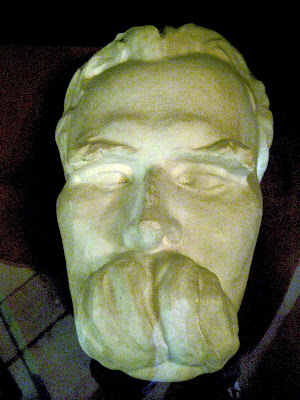 We peruse Fritz’s letters beneath glass, and bespoke leather notebooks from Germany he favored for recording thoughts, two death masks (his sister, Elisabeth the Nazi, did not like the first) and many photos.

Upstairs we inspect Nietzsche’s room, reproduced in the Spartan style he insisted for himself.

I engage the curator.  “How did Nietzsche find this place?”

“He went first to St. Moritz, on the other side of the Engadine, but it was too noisy for him.  He asked where it was quiet–he suffered from migraine headaches–and someone suggested Sils Maria.”

“Is it true he lived next door, at Hotel Edelweiss, before moving here?”

“He stayed once there.  After that, he moved to Alpenrose.  When he decided he liked Sils Maria well enough to stay, he rented a room in this guesthouse and paid his own money for green wallpaper.”

“What about the Nietzsche rock, where he found inspiration–is that the small stone before you reach the lake?”

“No.  Nothing to do with Nietzsche,” she says.  “There are two Nietzsche rocks.  One is on Chaste, near the end, but it is difficult to find.  You must look for an inscription from Zarathustra on a cliff side.  But we think the one on Chaste is not real.  Pooh.  It was invented years after Nietzsche died, by his sister, Elisabeth, whose husband created a Nazi colony in Paraguay.  Pooh.  The real rock, we think, is near Lake Silvaplana.  Nietzsche would walk from here, one-and-a-half hours.”  The curator shows me a black-and-white postcard of Der Pyramidale Block in a neighborhood called Surlej.  “It is here.”

I find JL.  “Grab the wheels, we’re taking a ride.  And I just found someone who poohs more than you fart.”

Van Stein stays behind to paint Nietzsche Haus; we roll to Lake Silvaplana and Surlej as drizzle thickens into rain.

Mazey points to a darkened house sitting alone by the lake.  “I think it’s behind there.” 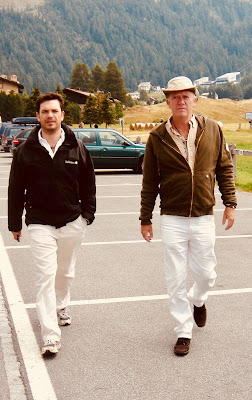 JL parks.  We march across wet grass until reaching a thirty-foot high rock shaped like a pyramid.  I hold up the postcard given me by Pooh Lady and synchronize it with the panorama.

“Yup.  It.”  I point to Wanderweg, a lakeside tree-lined trail that leads back to Sils Maria.  “That’s how Nietzsche would walk here.”

“I just know.  He came here for solitude, and that’s the loneliest trail I’ve ever seen.”

I position myself upon a flat surface a quarter way up Pyramid Rock and drift into contemplation.

Nietzsche chose his locations well.  Sitting upon the philosopher’s stone, facing southwest, is a view on par with the Grand Canyon.

This is where Zarathustra thus spake to Nietzsche; where the most creative and maddest philosopher of modern times thunk up his enduring thoughts.

Without plan or comment, we fan out, finding our own zones in tall soggy grass, upon which we lay to absorb the timeless majesty of this setting.

I want to wander back to Sils on Wanderweg, as Nietzsche did 120 years ago, but time is short, and silently we amble back to the car.

Posted by Robert Eringer at 6:22 AM