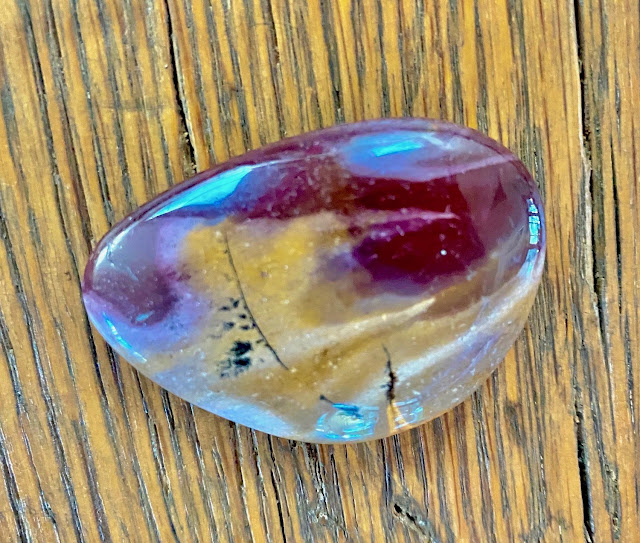 Re-entering Sils Maria, I remember a bookstore we’d passed on our way out and ask JL to stop the car when it reappears.

“The answer to your problems is inside,” I whimsically say to him.

Without a decent space to park, he remains with the car; Mazey and I venture inside.

Gesundheit has books, yes, but this is more than a bookstore, we soon discover.  It is similar to a shop one might find in Sedona, Arizona. Rocks and minerals occupy one corner.

I ask Mazey, a German speaker, to inquire of the proprietor which rocks are indigenous to the region.

AnneMarie overhears and responds in English, an Australian accent, pointing to a box of blue and purple stones unique to the Engadine.

“Choose one for yourself,” I say to Mazey.

I do the same, a smooth pebble that looks like a miniature abstract by Kandinsky.

While Mazey engages AnneMarie in conversation, I wander to another section of the shop, to a collection of handcrafted objects of all colors.

“What are these?” I interrupt.

“Ah.”  AnneMarie glides over.  “These are matrignons.”

“We are bombarded with waves,” says AnneMarie.  “Lightwaves from the sun, radio waves from TV and wireless phones and computers.  Many of these waves are harmful.  The matrignon, using tachyon energy, distinguishes between the two.  If you wear a matrignon, it dispels negative waves and accepts positive waves.”

AnneMarie looks deep into my eyes.  “Yes, you do.”

“Do I choose one myself?”

“No, the matrignon chooses you.  It must be the correct matrignon for you personally.”

AnneMarie steps away, returns moments later with a crystal pendulum.  “I must consult the angels."

She closes her eyes and swings her pendulum slowly in a circular motion over a grouping of round and triangular shapes.

It’s going to be the purple triangle, I think to myself.

The pendulum stops over purple.

Purple.  The color chosen for me by my imaginary friend.  Ten years of psychoanalysis?  Pooh, to quote Nietzsche’s curator.

“And a strand to wear it with?” asks AnneMarie.

AnneMarie chooses a mauve string and slips the matrignon–a purple pyramid with an upside-down triangle carved into its center–around my neck.

“You need to wear it here," she says, "just over your sternum.”

Is this really Mazey Sunshine, our rigid neuro-psychologist?  JL should do this, too?

Minutes later, Mazey returns.  I expect her to say that JL can’t be bothered.  But, instead, our road trip cynic says he’ll come in if I swap places minding the car.

Ten minutes pass.  They’re still inside.  A parking space opens.  I nail it and go back into the shop.

JL and Mazey are white-faced, like they’ve seen a ghost.

“You wouldn’t believe what just happened,” says Mazey, daze-like.  “As soon as JL walked into the shop, AnneMarie froze and grew quite alarmed.  She told JL there are people who want to harm him, and asked if he was aware of that.  JL said yes.  She didn’t even need to do her pendulum bit.  First, she picked up a round crystal, the size of a large coin, then she changed her mind and picked up a crystal twice the size.  She said to JL, ‘You’re going to need this.’  She told him he has to wear it all the time, even at night, and if he takes it off in bed, to sleep with it under his pillow.”

He expression says he is blown away.

“Can you believe this?” he whispers.

“Didn’t I tell you the answer to all your problems is in here?”

JL pulls the huge talisman out from under his shirt.

While I’m paying, I spot a small silver bell adorned with an angel.  It reminds me of my angel from Sedona.

That’s the difference between Sedona and Sils Maria.  In Sedona, everything is for sale.  Otherwise, Sils Maria is to Europe what Sedona is to the United States:  Stunning natural beauty, for sure.  But Sils Maria is also a magical place, if lesser known, where people come to recharge their batteries. The Engadine Valley, we learn from AnneMarie, possesses a deep concentration of electromagnetic energy that stimulates the mind and rejuvenates the soul.

But this being Switzerland, there is no hype, no new age crystallization, no woo-woo.

This is old age (not new age) stuff.  People come, have been coming for centuries, to walk and take the air.  Simple as that.

The Swiss, a hushful bunch, would not give a second thought to promoting or commercializing this low-profile treasure.  They don’t need the money–and they don’t want the hordes.  Sils Maria could be twinned with Sedona.

And nobody knows it but us.

Well, Nietzsche figured it out.  Partly.  He tapped into the energy and put it down to walking.

All truly great thoughts are conceived by walking.

So, Nietzsche believed his great thoughts were the result of walking.  But walking in Turin, Genoa, and Nice did not produce Zarathustra.  It was trekking around the Engadine that super-charged Nietzsche’s syphilis-tormented brain.

And here’s another point worth mentioning, in the same vein:  Sils Maria does not make a huge fuss of Nietzsche the way Arles is consumed by Van Gogh or Figueres is concentrated around Dali.  You’ve got Nietzsche Haus, open three hours a day, six days a week, no fanfare, and no Nietzsche mugs in the souvenir shops—vintage cowbells, instead.

We climb into the car, cruise to where Van Stein is laying final brushstrokes. 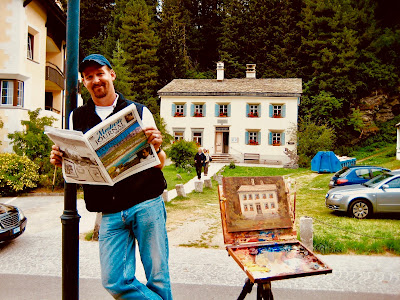 When Van Stein eventually returns, I tell him, “Our neuro-psychologist has been totally blown away.”

“The pyramid rock?  I should have gone, too.”

“The bookstore. It’s better if they explain it over dinner.  As Carl Jung once said, ‘Show me a sane man and I will cure him for you.’  Prepare yourself for The Transformation of Mazey Sunshine.”

Posted by Robert Eringer at 5:16 AM