We follow Vincent’s footsteps from Arles to St-Paul-de-Mausole, the asylum, near St-Remy, which he soon called home.

Part of the complex is still a hospital, but only for insane women.

The older wing, where Vincent lived, is a museum open to the public for a few euros’ admission.

The shrinks who run this asylum apparently learned a thing or two from Vincent.

They ask their patients to paint pictures.

They call this art therapy. 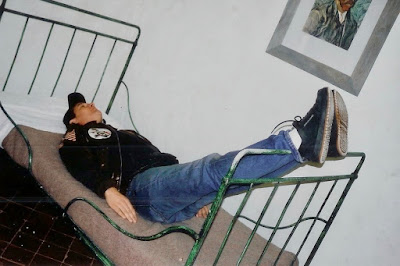 We check out Vincent’s room, the bed where he slept...

...and the bathtub where they locked him down for hours because shrinks back then believed that prolonged bathing cured insanity.

That’s where we find the artefact (whose whereabouts we deciphered in Vincent’s letters to his brother Theo):


Rather, a piece of Vincent’s ear; the bit he sliced off, and later deposited behind a loose brick in the bathing room, long after it was rejected by Rachel, his favorite prostitute. 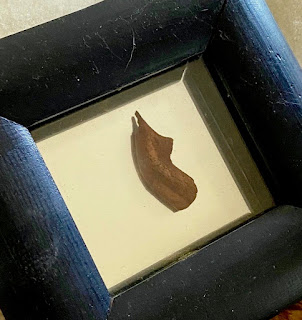 
St-Paul-de-Mausole peddles Visionary Art created by their patients to tourists who come see where Vincent was institutionalized.

We study the art.

I spring 120 euros for a paper-mache bar relief of a ghostly white figure.


It is called De Laut en Bas (High and Low).

A small price to pay for true expression by an artist who suffers acute bi-polar syndrome.

Posted by Robert Eringer at 6:15 AM