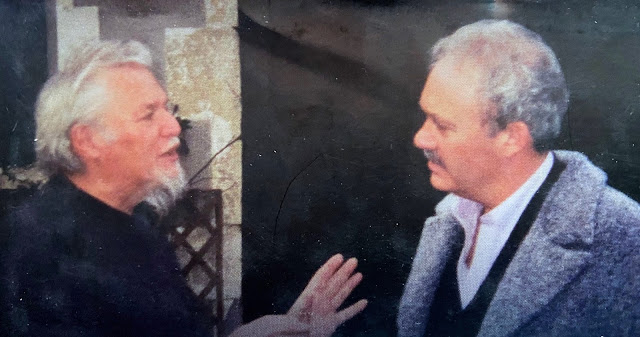 The problem: Convicted killer Ira Einhorn was a fugitive in France, his extradition delayed for years by foot-dragging French authorities whose apparent eagerness to shield a murderer aggravated even the most jaded observers.
The solution: Robert Eringer. The undercover FBI operative persuaded his bosses to send him overseas to win Einhorn's trust and somehow speed up his extradition.
Einhorn's charisma was legendary. "I was told: 'This man will cast a spell over you; he will hypnotize you,' " Eringer, 53, said in a phone interview from his Santa Barbara, Calif., home yesterday.
Instead, Eringer succeeded in "bamboozling Beelzebub," as he puts it in his new book "Ruse: Undercover with FBI Counterintelligence."

In the book, released last month, Eringer recounts the two years he spent fooling Einhorn into a faux friendship that eventually led Einhorn to confide his plans to flee France and head to Cuba, where American criminals routinely are granted political asylum.
With Eringer's help, police in France and America learned of Einhorn's plot and quickly stifled it, bringing the aging activist, convicted in 1993 of killing his girlfriend, Holly Maddux, in 1977, and hiding her body in his closet for 18 months, back to Philadelphia to serve his life sentence.

Eringer tells how he e-mailed Einhorn, an Internet junkie, in November 1998, pretending to be a book publisher who wanted to publish Einhorn's work.
The pompous Einhorn quickly invited Eringer for a visit. Starved for conversation in his native tongue and warming to Eringer's flattery and feigned adoration, Einhorn treated Eringer as a trusted friend.

He sent the undercover agent hundreds and hundreds of e-mails - so many that "wading through them was the most time-consuming part of writing 'Ruse,' " Eringer said, referring to his 215-page work.
To string Einhorn along, Eringer promised he'd work to publish Einhorn's novel "Cantor Dust." The book, Eringer wrote in "Ruse," was "the most incoherent crock I'd ever read."
Instead, he told Einhorn it was "one of a kind. Astonishing in its depth."
The relationship continued in e-mails and visits, until Eringer, feeling pressured as the impatient FBI froze funding on the operation, took a risk: He suggested to Einhorn that he flee France to avoid extradition.
Einhorn's response: He was headed to Cuba.
"That's where my lawyer has advised me to go, Cuba," Einhorn told Eringer. "All my friends have been urging me to flee."
Einhorn confided his plan to duck French surveillance and flee to freedom through his back garden, leaving his wife Annika behind to fool French authorities by pretending that Einhorn was still living with her in their shabby mill house in Champagne-Mouton.
Einhorn also talked about suicide as a last resort - self-immolation in the symbolic style of the monks from the Vietnam era, the author wrote.

And Eringer persuaded the couple to divulge details of a secret bank account they held in Luxembourg, under the pretext that he would deposit a book advance there.
Eringer shared every detail of his interactions with Einhorn with Philadelphia and federal authorities, and France finally approved extradition in 2001.
"I'd never met anybody in my life that was more Satanic, in my mind," Eringer said yesterday.
His contempt is clear in his writing. Although Einhorn's code name during the operation was "Sam," Eringer and his colleagues privately called him "Fat Ass."
Eringer found Einhorn to be an insufferable windbag during their visits, lazily spouting "flatulent psychobabble" while Annika bustled about tending his every need.
Annika "wouldn't as much as belch without Einhorn's permission," Eringer wrote.
Interestingly, the couple lived in near poverty.
Though he craved the limelight, Einhorn wanted to publish his books as much for the money he dreamed his novels would generate, Eringer found.
And while Einhorn relished media attention, it also sometimes seemed to torment him, Eringer wrote.
He recounted one conversation in which Einhorn complained about American journalists banging on his door, including "that demon lady" Theresa Conroy, a former Daily News reporter who aggressively covered Einhorn's case and extradition.
And despite his reputation as intelligent and hypnotic, Einhorn could be intensely dense, Eringer wrote.
Months after his extradition, he still hadn't realized that Eringer was not the book publisher he'd professed to be.
In a 2001 letter to Eringer from his cell at the state prison in Houtzdale, Pa., Einhorn wrote: "According to A. (Annika), you have just disappeared . . . When we last talked, you said you would work to get C.D. (Cantor Dust) published . . . "
Eringer has also worked as a private intelligence consultant and investigative reporter who once infiltrated the Ku Klux Klan.
After his 10-year stint with the FBI, he created and directed an intelligence service for Prince Albert II of Monaco.
Here's the book on catching Einhorn

Posted by Robert Eringer at 1:36 PM