At daylight, we motion along the autostrada enchanted by the voice of Joseph McManners, a stand-alone choirboy who sings...

First (or second) angel.
Stoked by frothy cappuccino, we roll onward to our intermediate destination, as plotted by JL:  the town of Pontremoli, at Moon Valley’s very heart, surrounded on three sides by unusual mountain ranges, one of which–the Apennines—resembles the edge of a lunar crater.

We stretch our legs, greeted by a sign, Pro Loco, while, down the road, a loco-moon-faced female yells at a stationary car, the only activity in Pontremoli this afternoon.

We ascend the old fortress, now a museum, situated on this town’s highest ground.

We are the only visitors all day, probably all week, perhaps all month, maybe all year.  (Pontremoli’s tourism bureau is now defunct.)

A solitary museum clerk takes our euros, looks at us like we’re out of our minds to be here and permits us free roaming through a desolate fortress that seems based more on earthly cruelty than on moon worship.

A jail, a dungeon.  Unspoken horrors have left an aura of fright. 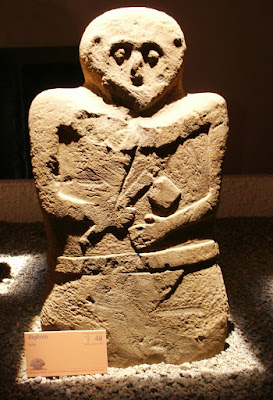 A plaque discloses that Emperor Barbarossa had designated the local aristocracy Counts of Luni.

These genuine lunies carved mushroom people out of stone and worshipped them in moonlight, from which certain etchings and symbols could be seen.

Lunies claim to be the inspiration (and origin) for Britain’s Stonehenge.


Down the road is an impressive cathedral, quite large for so small a town–as if the Christians behind its creation did their damn best to sway the natives from such pagan ritual as moon worship. 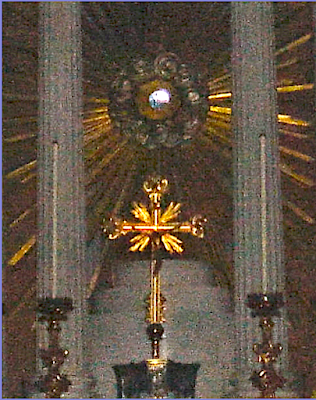 Yet, above the altar, at the apex of a cross, is a round glass object that resembles the moon.

So, who was fooling whom?

Did the cathedral builders use the moon as a lure?


Or had they been infiltrated by moon worshippers?

This being Italy, road-signs make no sense, but guided by high-tech navigational equipment JL wheels us to the town of San Casciano, ten miles from Florence—and the Villa Mangiacane, translation: Dog Eaters. 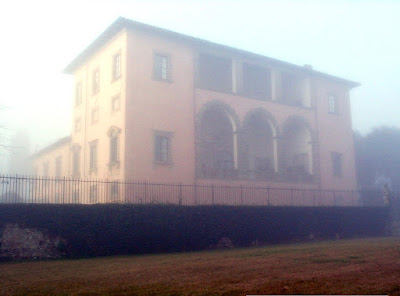 An electronic gate slides open; a long dirt path leads to the three-story villa, looming esoterically in the shadows.

JL has visited this villa only once, two years before, when it played host to the spookiest event of his life:  As he lay in bed, held captive by sleep, he felt a presence, studying him closely.  Mustering all his energy to force his eyes open, he snagged a fleeing phantasm with a high-domed head, tight-skinned face with mischievous smirk and long neck, wearing a strange gown.

JL awakened believing he had been abducted and fiddled with by extraterrestrials.

“We have the royal suite ready for you,” says Erica, the villa’s hostess.

“No, not necessary,” says JL, a member of Monaco’s royal family.  “Put me near my friends.” 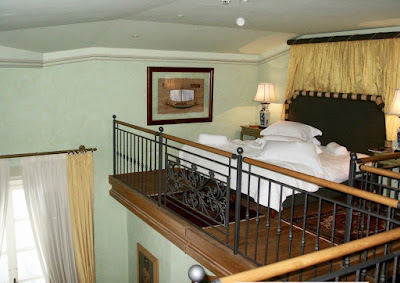 Lavish duplex suites await us, connected by a communal loggia with twenty-foot high ceiling and a view of Florence eight miles away, its light casting a halo over a city famous for renaissance intrigue–the Medicis and the Borgias, and the greatly misunderstood Niccolo Machiavelli.

Within a few minutes it becomes clear why we have found this place–or why it has found us:

This villa is the Machiavelli family seat, to which the father of political science was banished, from Florence, by the autocratic Medicis, and where, for fourteen years, he wrote his discourses—including an enduring master thesis called The Prince.

There is time, however, only to savor, not digest, this piece of information, because a more pressing matter demands our attention.

“There is somebody staying here who knows that you are related to the Prince and wants to meet you,” Erica tells JL.

JL exchanges glances with me.  It is a name we both know from our princely work.

Arivadze, an affable crook from Georgia (the former Soviet republic), amassed a large fortune through various shenanigans and used it to penetrate the Prince of Monaco’s orbit of friends, probably on behalf of the Russian special services.

“What’s he doing here?” I interject.

“A dinner party.”  Erica motions at the dining room.

Through a doorway we behold a dozen austere, surly men seated around an oval table.

We are now a cartoon from The Adventures of Rocky and Bullwinkle.

JL is Rocky; Van Stein is Bullwinkle.  And Anjelika, our Russian spy, is Natasha.

With barely a cue from me, Natasha bounces into the dining room, sans invitation, and says, “Good evening!  Nice to hear the Russian language!”

Boris wants Natasha to remain, but her entrance is just a tease, and she rejoins our party for dinner in the wine cellar, reserved exclusively for us and illuminated by tall freestanding candelabras. 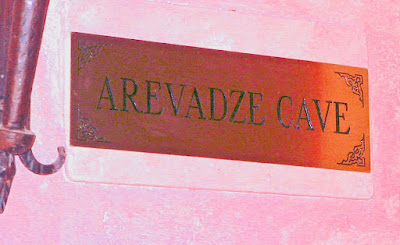 A brass plaque over the door says The Arivadze Cave, clueing us that Boris is a secret partner in this establishment (a notion cemented when we discover his pet dog is kept in a villa kennel).

To be sacrificed and eaten?
A five-course meal is served with Chianti Classico reserve (produced in this very neighborhood), during which JL recounts the night terror he endured here, while orbs from our surreal bouncing assemble around us in the cellar.

Returning upstairs, Natasha positions herself on a loggia, smoking a cigarette, while Rocky, Bullwinkle and I sip red wine, watching Boris get reeled into our honey trap.

Within minutes, Natasha is sitting in the dining room with table-full of wily Russian conspirators.

He thinks he can trade us a bottle of wine for our angel (or devil)?

We don’t refuse the wine, but this effrontery precludes us from uncorking it, and we leave it on the table un-drunk, decamping to our communal loggia.

Lurking nearby, a solitary man puffs a cigar.  He then lights another, even though the time is way past one in the morning.

JL engages him.  The stranger accepts chitchat, sticks to banalities.  Turns out he’s French, nothing to do with the Russian dinner party; he and his wife are the only other guests at the villa this evening.

So, he’s probably DST or DGSE–French special services–keeping tabs on whatever the Russians are up to, and he’s probably wondering what the hell we–the Rocky & Bullwinkle Show—are doing here.

The Russians, he was expecting.  Us?  Once he (mis)concludes CIA crashed the party it will complicate his report writing.

JL decides to check on Natasha by introducing himself to Boris, say thanks for the un-drunk wine.  He returns twenty minutes later with the bottle, now uncorked.  (Alas, we were thirsty.)

“Natasha’s too close to them, man!” he says.  “They’re slobbering all over her.”

We continue to sip wine, having already consumed too much, as the morning hours tick onward, a dark, moonless Florentine night, cold creeping into our bones, until, finally, just past three o’clock, we hear our vivacious Angel in the hallway.

I cut around from the loggia to greet her and find a Russian goon–not Boris, more like an Igor—standing outside her door, insisting her suite is his own.

When he sees me, the stocky, gruff, crew-cut Igor backs off, grunts goodnight to Natasha, and creeps to his room adjacent to the loggia where, unseen, Van Stein and JL are sharing a joke, laughing.

Believing himself to be the butt of their laughter (perhaps the norm for him), Igor slams his door.  In case we do not get his point, he opens the door a few inches, glares out and slams it again.

No subtlety, Russians.  Even when they poison someone, they use ten times the lethal dose, then accuse everyone else of aggressive, obstructive behavior.

Igor, says Anjelika, is a GRU general who quickly decided that she probably works in “Division Three for Pavel Pavelovitch.”

And maybe she does.

“Yes, they ask me,” says Angel.  “I tell them you are my three husbands:  a writer, an artist and a baron.”

Posted by Robert Eringer at 6:54 AM