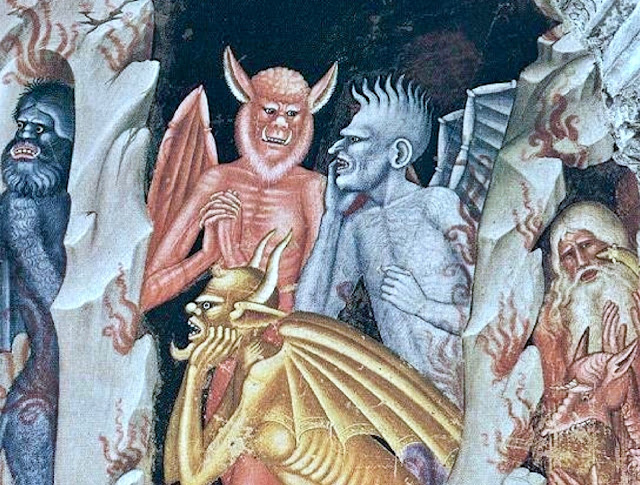 Having come this far, connecting to Machiavelli's spirit, we need to snuggle closer to the father of political science.

This means an unplanned return to Florence, and to St. Croces Cathedral where the remains of Florence’s revered creative types–Michelangelo, Galileo, et al—are interred.

Mass is underway when we arrive, so our driver whisks us to an offbeat museum devoted entirely to… (but of course) angels and devils.

It features long corridors and prison-like rooms, not much larger than cubicles, each preserving off-kilter frescoes, paintings and icons that all seem bent on scaring the hell out of everyone to pray and repent or spend eternity being eaten, pitch-forked, knifed, speared or dismembered by that Emperor and Lord of Hell, Lucifer—and assorted minor devils including, but not limited to, Cagnazzo, Gooseberry, Moco, and of course, Ticky-Tacky (whom we found in Sedona, Arizona).

We motion back to St. Croces and Machiavelli’s cenotaph:  a larger-than-life statue and, on the marble floor, a rectangular crypt-like design suggesting that the relics (bones) of Big Mac lay beneath.

JL climbs over the rope barrier to peer down upon him.

“That’s what he wanted,” I whisper.

JL throws a backward glance.  “Huh?”
“For you to pay attention.  You’re doing to him what he did to you.”

JL regards me with a quizzical expression. 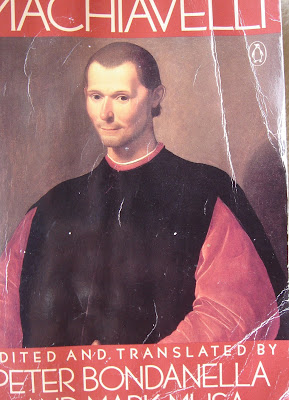 “Your dream at the villa,” I say.  “It wasn’t an alien.”  I point at the statue of the alien-faced Machiavelli. “It was a Big Machia Attack.  Niccolo wanted you to notice him.”

JL’s eyes widen with epiphany.  “You’re right—it was him!”

JL blushes.  “From where do you get these ideas?”

“It’s not easy being me.”  I point at Latin words inscribed in marble on the slab.  “What do you want your own epitaph to say?”

“Final words, on your gravestone.”

“Never thought about it.  You?”

Machiavelli’s relics, alas, may not lie in this spot.

His actual burial place is unknown, but in all likelihood it is within the grounds of Villa Mangiacane, where his spirit roams.  That is where he went mad.

Hence, a tie-in unexpected when we motioned ourselves across continent and ocean less than one week before.

When he was 25 years old in 1494, two years after Columbus discovered America, Machia, as his friends knew him, entered government service in Florence as a clerk.

A well-fortified and bustling city-state, Florence was an appealing prize to papal armies and neighboring countries.  The mighty Medicis had just been overthrown and expelled; Florence, transformed into a republic.

This suited Machiavelli just fine, since he was really a republican—and a non-religious humanist—at heart.

He came to believe, however, that only an autocratic royal ruler—a prince–could defend a city-state from hostile foreign powers.

He kept his thoughts to himself as, in the capacity of Second Chancellor, he undertook diplomatic missions and—for three years—took charge of the Florentine militia, whose job it was to defend the city.

It all turned sour for Big Mac in August 1512 when the republic was scrapped and a new Pope restored the Medicis to power.

They returned with vengeance.

On November 7th, Machiavelli was fired.

A couple months later he was arrested on charges of conspiring to overthrow the new regime, thrown into the clink and interrogated by torture. 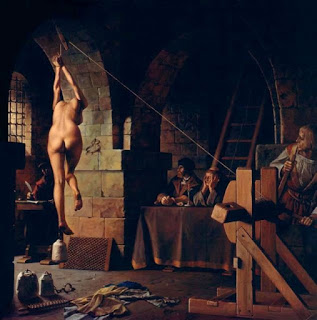 Big Mac was strappado’d (hung from his hands tied behind his back, hoisted to the ceiling and dropped, stopping short just before hitting the floor).

He admitted nothing, denied everything, grew an inch or two.

The Medicis eventually released Machia; they booted his butt to his family’s family estate in San Casciano, where he lived thereafter in exile.

Politics and statecraft was all Machiavelli cared about.  He tried to talk his way back into Florence, pledging support for the Medici rule–anything that would keep him in the game—to no avail.

For a political junkie like Machiavelli, exile was almost as bad as the strappado.

To take his mind off the intrigue he was missing in Florence, Machiavelli worked the fields of his family estate, supervising the cutting of trees to be sold as firewood, and playing backgammon in the local tavern.

Evenings were preserved for solitude and madness.

This is what he wrote to his friend Francesco Vettori on December 10th, 1513:

When evening comes, I return to my house and enter my study; and at the door I strip naked, taking off the day’s clothing, covered with mud and dust, and put on the regal robes of court and palace; and re-clothed appropriately, I enter the ancient courts of ancient men, where, received by them with affection, I feed on that food which is only mine and which I was born for, where I am not ashamed to speak with them and to ask them the reason for their actions; and they in their kindness answer me; and for four hours of time I do not feel boredom, I forget every trouble, I do not dread poverty, I am not frightened by death; entirely I give myself over to them and I pass indeed into their world.

Machiavelli believed that he interacted directly with Dante, Plutarch, and Plato.

This became his art, upon which he was totally focused; it provided therapeutic escape from his fears and depression and led, ultimately, to his penning The Prince–a work produced by what today’s New Agers would call trance-channel.

No doubt Machiavelli suffered depression from his banishment.

But did torture push him over the edge of sanity, into the realm of hallucination?

Talking to the dead qualifies as an idea of reference; hallucination is criterion for schizophrenic disorder.  Big Mac’s words also imply fears of poverty and death-delusions, symptoms of psychosis.

So:  Was Machiavelli nuts?

Had the Medicis driven him to depression and madness?

We had not sought Machiavelli; would not have imagined him a player in our creativity and madness paradigm.  But the Bounce–maybe Vincent, Dymphna or Dali, all three–put us on a metaphysical wavelength upon which Big Mac reeled Van Stein and me to him—to convince us of his qualifications for membership in our travelling orb club.

Machiavelli’s dialog with the great philosophers, which morphed into The Prince, was published posthumously thirty years after he wrote it.

He tried to use his unpublished treatise to tease the Medicis into bringing him back to help govern Florence.

Truth was, the Medicis had Machia pegged:  He was a mediocre statesman who took no risks for fear of compromising himself.  He was good at two things:  One, playing all sides, and two, writing literature, for which his name endures.

When the Medicis crashed and burned in 1527, giving way to a new republican government, Machiavelli rushed to Florence to lobby for high office.

But he got sick en route, and died, oblivious to the notion that one day Merriam-Webster would define Machiavellian as cunning or devious.

Or that his smirk would captivate the world’s imagination for centuries to come.

For this is where Van Stein and I crack the real Da Vinci code.

The real story is that Big Mac and Leonardo knew each other in Florence during the first decade of the 1500s.  They even worked together, from 1503 until 1506, on a bold engineering project to re-route the River Arno away from Pisa, with whom Florence was at war, to deprive the Pisans a fresh water supply.

It failed, causing Da Vinci to exile himself to Milan for fear of reprisal (a typical response to failure), but also from a broken heart.

Da Vinci, a homosexual, was in love. 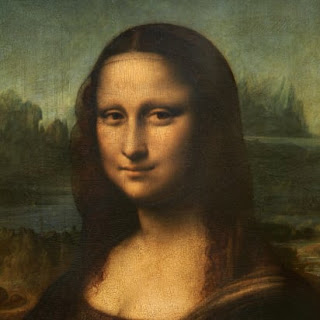 He documented his love by painting Machiavelli.

The Mona Lisa was painted between 1503 and 1506, the same years Machiavelli and Da Vinci worked together. 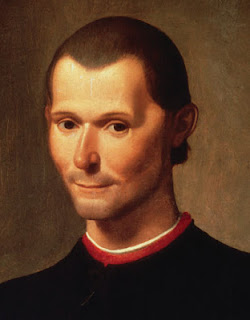 Mona Lisa’s mysterious smile is Big Mac’s enigmatic smirk, described by Machia’s biographer as “neither a grin nor a sneer; a shield to protect against prying eyes.” 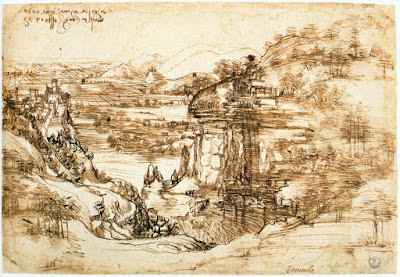 The painting, which Da Vinci never sold and always kept near him, dear to his heart, pays homage to his love for Machiavelli.

Villa Mangiacane stands forlorn and desolate when we return for our bags.  And now Machiavelli is deserting it, too—set free by the séance to join our mystical band of sleep-deprived gang of adventurers.
None of us want this road trip to end.

Hence, arrival in Monaco is not joyful, but a time to un-cling–from motional to emotional—until it’s just me and Van Stein at Quai des Artistes quaffing grosse gambas with artichoke-stuffed ravioli in a truffle sauce, a bottle of Margaux to wash it down.


(Later, when Van Stein complains about this trip’s high cost, which he must repay in art, I respond thus: “The right time to protest was just before biting into the grosse gambas, not long after it’s been recycled.”)

Posted by Robert Eringer at 7:00 AM