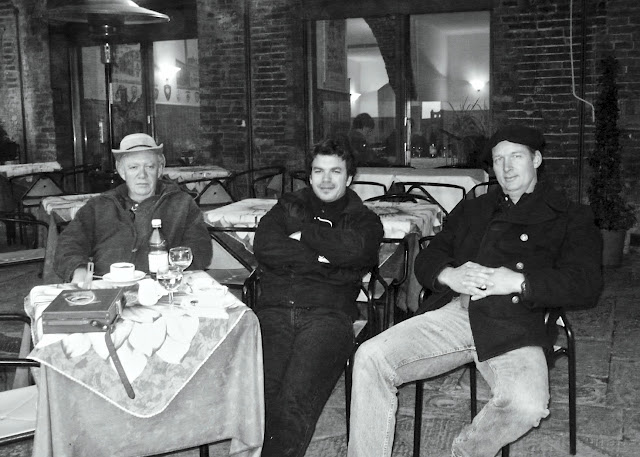 Next morning, we depart Monaco, fly to Paris, and motion to its very heart:  Ile St-Louis, a village in the middle of the River Seine connected to land by a number of bridges.

Paris was born here, protected by a natural moat.  Now it is the French capital’s quaintest (and most expensive) neighborhood.

We stroll the main drag, St Louis en L’ile, and poke into a Venetian mask shop.

On a back shelf a mask collects dust, its price tag  far below the amount of craftsmanship that went into burnishing it by hand.

But it remains forlorn and unwanted. 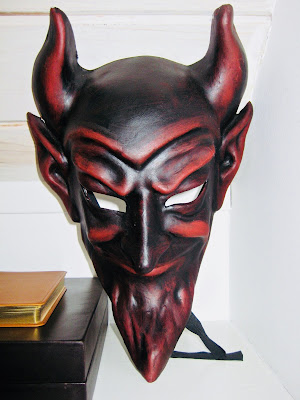 Because it is a devil mask.

On the basis that Van Stein must paint it, I take possession and, within minutes, we find a venue:  Sorza—a small restaurant with a flaming red backdrop.


Van Stein enters with JL, speaks with the proprietor, who agrees to let him paint inside.

“Does he know what you’re going to paint?” I ask.

I slip the mask over my head. 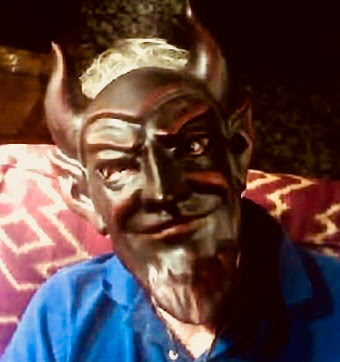 We expect the restaurant proprietor to throw us out when he sees Van Stein’s subject, but he says nothing and merely watches quietly from a corner table while assorted pedestrians stop dead in their tracks and peer through the window, questioning their eyes, as it appears Lucifer is basking inside. 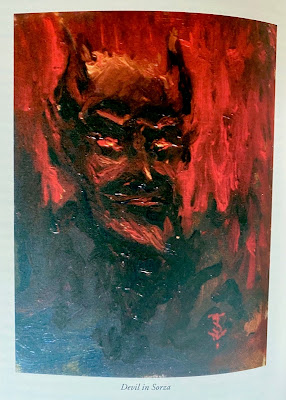 Van Stein works quickly on this alla prima sketch, finishing in thirty minutes, thank God, because it’s hot as hell beneath the mask.

I hand Van Stein the mask.  “Can you keep this in your room tonight?”

Later, Van Stein, our decoy, heads out with his paints.

Whatever goons have mobilized are focused on the artist, while JL and I steal around dark shadows within the City of Light.

When they realize Van Stein is just an artist, our cell phones come under merciless attack.  The only way to avoid revealing our position—and our telephone and live conversations–is battery removal. 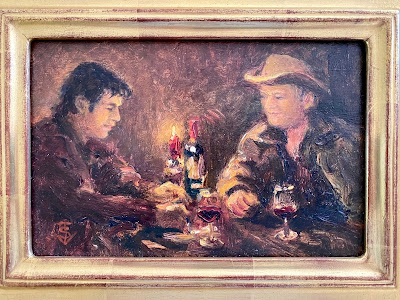 We regroup at dusk, a bottle of Margaux—in a dark, candle lit corner of Le Sergent Recruteur—over which the artist sketches JL and me Exchanging Secrets.
By now we’re operating on four hours-a-night sleep—Van Stein, probably less.

For me, all the motion, madness and sleep deprivation is exacting a price.  It starts with anxious dreams.  In one, I’m having a brush with official-dumb.  I have jaywalked, and a uniformed female Nazi wants to make a federal case of me.  I point out that enforcers of laws or by-laws are blessed, if they’re smart enough (unlikely), with something called discretion.  That is, they’re capable (usually not) of assessing ill intent on the spot and handling the situation accordingly.  The Nazi suffers meltdown over my audacity and summons brutes to subdue me with tazers and threat of strip-search.

But it is the second dream that truly spooks me:  I awaken, not in my hotel room as expected, but in a hotel lobby I do not recognize.  My bags are gone.  When I anxiously enquire about my possessions, about where I am, a woman sitting behind a desk replies that I have been asleep for three days and nights.  This thought occurs to me:  I’ve been out cold for three days and nights?  My things are gone andI don’t know where I am?  HAVE I FINALLY LOST MY MIND?

Awakening next morning, JL farts goodbye and propels himself home to Monaco.

Van Stein and I return to London, same hotel, full- gloom.  And next day out again, to whence we came.

I put the brakes on, but it’s hard to stop motioning, like when you get off a freeway after driving eighty-five miles an hour all day and suddenly you’re supposed to do thirty through town.

That’s how Van Stein and I feel at Starbucks, Montecito, 4:48 in the morning; lagged but still driving fast.

“All this business about angels and devils, it’s a signpost.  Only God can resolve our quest into creativity and madness.”

“So where are we supposed to find him,” says Van Stein, “the Vatican?”

“The Vatican is just an organized cult, like all ancient religions.  We found the devil in freezing cold Iceland, the opposite of what anyone would expect, and that actually makes sense because the devil’s job is to deceive.  So my guess is, on the basis that life, and humor, according to Jonathan Winters, is about irony, we’ll find God in a hot zone, a red hot zone.”

And that’s how we ended up in Sedona…

Posted by Robert Eringer at 7:25 AM