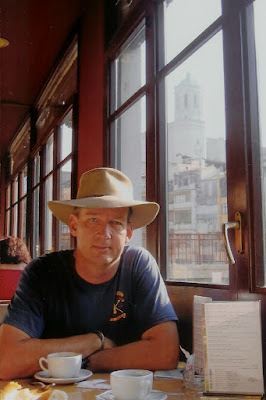 Historic Hotel’s manager, a proud Gironan, directs us to the right place for cappuccino:

La Terra, along the river.

We drink two apiece, marveling how intestinal cartography brought us to so magical a place. 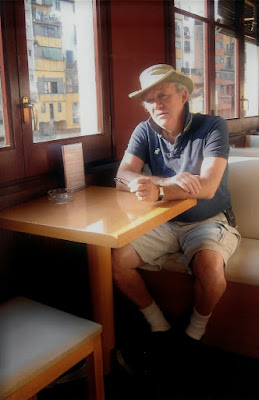 With reluctance, we pack up the VW pocket-rocket and zip northward toward Figueres, a road that features ladies of the day as half-mile markers. They sit patiently, offering their unique line of roadside services.

From Figueres, we take the road to Port Lligat, where Dali settled in a sea-front stone cottage; where he lived and worked for half-a-century.

It is maybe one of the most pleasant drives in Europe, especially with the sun out, a blue sky and balmy breeze—and a Gti to grip the circuitous, hilly road.

We descend into a small fishing village, which these days exists to preserve (and profit from) Dali’s memory. 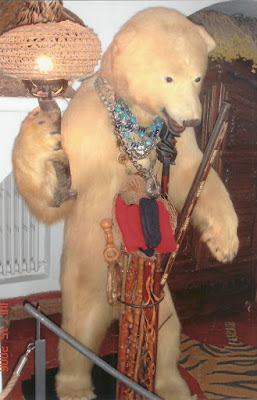 The master surrealist’s house has been transformed into a museum with guided tours.

It is exactly as it was when Dali and his wife Gala lived in it, right down to their bathroom slippers.

Van Stein snaps photos of everything; immediately, orbs come out to play.

“You mean to tell me when you’re home in California, using this same camera, you never get any white balls of light like this in your photos?”

“Never, ever.  Only on these trips with you—starting in Gheel.”

“I got news for you, these are not orbs.” 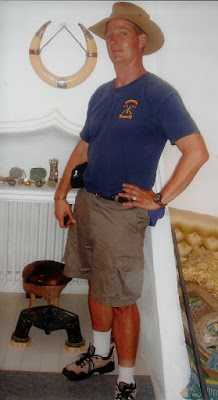 “Mini-moons.  The moon is either thanking you for making it the center of attention in your paintings—or punishing you by mucking up your photographs.  Either way, you’re getting mooned.”

Lest anyone believe Dali was fake, a contention supported by his penchant for blatantly marketing himself and what critics called selling out for money, poking around his old home confirms that Dali’s eccentric genius was not limited to public persona but highly pronounced in private life, symbolized by snails (whose form obsessed him) and a mixture of artefacts collected during his lifetime.

Or because together they constituted some kind of master puzzle to which only he knew the meaning?

Not just a gimmick for the masses, but an actual lifestyle.

(He filled his swimming pool patio with Michelin Men.)

Next door, where the merchants have set up camp, the commercialization of Dali is in full swing.

The Brand has taken control, represented by every consumer item that can possibly be manufactured in China.

But it is less unobjectionable than the marketing of Van Gogh in Arles, because we know the natives in that Provence piss-hole despised their (eventual) money-spinner and cruelly ran him out of town.

But here in Port Lligat the local hero was revered in his lifetime.

The so-called Dali Drive derives from Gala’s last ride, during which she was dead.

It begins at her beloved cottage in Port Lligat and meanders around scenic hills to the vibrant, colorful resort of Cadaques, with its rocky, coven-shaped stretch of coast.

Cadaques is in high bloom, being mid-July, mid-weekend; we cannot find accommodation, so we settle for a late lunch.

Usually, seafront dives where tourists frolic in high season are to be avoided. But not this bustling restaurant.

We order sea bass; two whole fishes—head, tail and bones–grilled to perfection with Spanish herbs and served with a potato, pepper and onion casserole.

Only once in a while do you have a meal that sticks with you (your mind, not your intestines) for months, maybe years.

Humarhusid’s and Naust in Reykjavik served such feasts. This is also the case in Cadaques, whose excellent if simple Costa Brava cuisine in ambient setting provides an enduring culinary memory.

After reserving two rooms through Amex at a "luxury resort," we aim south to Roses and cruise along its the main drag, which is suffering a major sewage issue.  (Plumbing has not changed here since it was a Greek colony.)

“Holy Mother of Christ,” says Van Stein.  “That better not be you.”

“Roses by any other name would still smell like crap.  I hope this does not bode badly for the hotel.”

All we need do is look at the place to realize it would not be the high point of our journey; it would conceivably be the low point.  Lower than Andorra—and that’s pretty damned low.

“Let’s at least go in, look around,” says Van Stein.

This is necessary anyway, to cancel the reservation in person or they would charge my card as a no-show.

We wander inside.  It smells like the sea:  damp, with the feel of a seabed.

The restaurant–dinner is included, even if they have to straitjacket and force-feed you intravenously–is a large white room dressed up with linen and crystal but no character, sea view aside; the type of view all hotels cash in on come summer, even if they didn’t bother to dust all winter or spring.

“May we see our rooms?” I say to the unsmiling check-in clerk.

It is moot humor at this point.  There is no way I’d stay in this place.  And for one hundred and eighty euros a night?

An assistant clerk is dispatched, keys in hand, to show what they have in mind.

Their rooms are damper than the public rooms, with less ambience; rooms that would encourage suicidal thoughts—even if you’re happy and balanced.

On the way down the corridor–which looks, feels and smells like a mental hospital–I pass a chambermaid who–in dress and demeanor—looks like an asylum orderly.

Van Stein catches it, too.  “Wow,” he whispers under his breath while exiting the elevator.

“I think not,” I say to the manager, who grunts and sniffs his nose.

We drive back through the sewage problem.

Instead, on to Figueres to see the Teatre-Museu Dali.

We can almost taste Dali’s museum as signs direct us to the city’s most important landmark:  Dali Worldwide Headquarters—a surreal palace that doubles as a crypt for Figueres’s favorite son.

We pay ten euros and slip inside.

The structure, designed by Dali as a monument to himself, is (but of course) bizarre.  He lays entombed in the foyer, beneath a slab that is not roped off and, situated dead-center, begs to be walked upon.

Van Stein snaps away with his camera.

“They followed us from Port Lligat,” he says.  “What are they trying to tell us?”

I look at two orbs posing within the museum.

Outside, on the Placa Gala-Salvador Dali, a guide directs us to Rambla, the city’s main square and nearby Hotel Duran, where Dali held court at meal times and roomed when staying in Figueres to design his museum.

We decide to do the same.

“Can we have Dali’s table?” Van Stein asks Anna the maitre d’ upon entering Duran’s restaurant after a Fernet Branca aperitif at the bar. 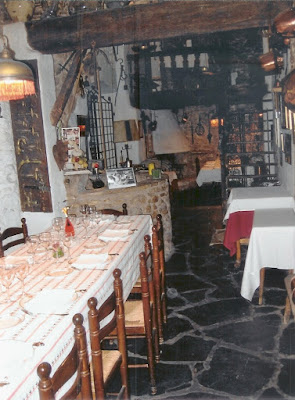 We cannot, the private dining room is closed.

But Anna takes us to see it.

She points out two chairs near the end of a rectangular wooden table.

“That is where Dali and his wife would always sit.”

Van Stein snaps a photo.  Orbs are settled upon each chair.  “See!  See!” 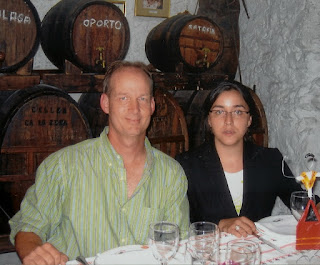 We take out seats in the main dining room.  A bottle of 1995 reserve rioja seems about right to quench or thirst.

Afterwards, a walk through the narrow streets that Dali traversed as a small boy, trying to see what he saw, smell what he smelt, feel what he felt:

Outside Dali’s museum, Van Stein asks me to snap a photo of him standing next to a Dali sculpture of an egg—a recurring Dali theme

“That’s how ideas are hatched.”

I press the shutter release.  The egg sculpture is captured, but no Van Stein. 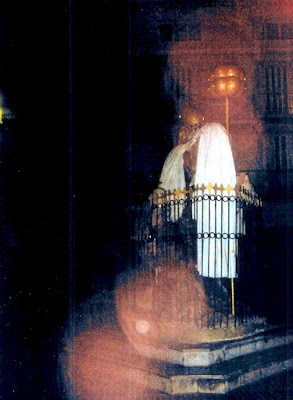 He looks at the image, astonished to see his physical presence excised.


Back at the Duran, Van Stein climbs through a fourth floor window and finds his way to the roof, a skyline view of Figueres.

This is where Dali sets him free to paint in a way he never felt possible—an un-inhibited bouncy-ness.