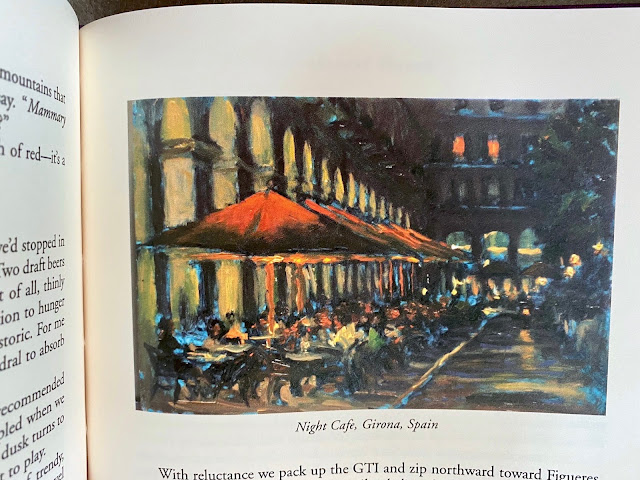 Following our jaunt to Andorra…

…Van Stein and I motion to Catalonia, where Salvador Dali was born (116 years ago today), and the Costa Brava, where Dali lived and painted most of his life.

Leaving Andorra is a precious experience.

Europe’s borders today are open; European Immigration and Customs posts are a fading memory, save the rotting shacks that once housed costive, stern-faced extorters.

Spain runs a thriving Customs post, determined to ensure that everyone kicks back to Spain a commission on all the duty-free stuff they purchased in Andorra. (You're supposed to drink and smoke all of it in this horrible little principality to avoid taxation.)

A dour-faced storm trooper motions me, with a snarl, to pull over.

I zip into a free space and climb out.

“Open,” he orders, pointing at the hatchback.

Van Stein, who strives to record dialog when possible, produces his cassette recorder and holds it out, the border guard between us.

Mr. Storm Trooper eyes the contraption with horror.  “Turn off,” he demands, affronted by such audacity.

The artist complies, zips it into his fanny pack.

“Is off?” says the border guard, suspicious that Van Stein is playing a fast one on him, like so many others in his sad past.

The artist unzips his fanny pack, plucks it out, shows him that it is not recording.

“Okay, off,” this threshold guardian grunts, misinterpreting Van Stein’s condescension as deference to who’s boss.  He pokes around our bags.  “What is?” he taps the artist’s wooden paint box.

“Uh-oh, you don’t want to go there," I caution, mindful of what happened in Provence. "That’s Pandora’s box.”

This Nazi is accustomed to finding excess cigarettes and booze, not art supplies.

“Okay, go,” he says, annoyed at us for wasting his valuable time.

We don’t need to be asked twice.  Gone is what we want most—from him in particular, from Andorra in general.  And now that he’s disturbed Van Gogh, just wait till he falls asleep tonight, may all his demons come true...

The roads in Catalonia are not direct; it takes hours to cover short distances.

Although we intend to drive to Figueres, we realize from intestinal cartography we might as well drive to Catalonia’s capital.

As we approach Girona, lightning bolts slash at its very heart from dark swirling clouds above.

We enter the city outskirts in time for a tremendous storm that dumps a waterfall upon us while bolts of lightning strike thunderously to our immediate right and left, as well as in front and back.

“Never seen a storm like this,” says an awed Van Stein, striving to discern its meaning, re-referencing ideas.  “You think we’re not supposed to be here?”

The wipers, moving at top speed, cannot clear the windshield fast enough from this downpour as we struggle to see directions into Girona’s medieval center.  We creep through flooded intersections; the rain is relentless, but somehow, miraculously, we navigate into the old Roman town with its maze of narrow cobbled streets that weave up to the highest point of this walled city.

We do this in search of Hotel Historic and, assisted by directions from the friendly owner of a tapas bar, we surprise ourselves by finding it, not a hundred yards from where we plunk the Gti on a square adjacent to the baroque Girona cathedral.

It’s still raining, though not as hard as before; storm shifting as we amble over cobblestones to the hotel.

They have one room:  an apartment with two bedrooms, two bathrooms, ninety-euros per night.

Across from the old Jewish Ghetto, this hotel is as ancient as the nearby fifteenth century cathedral, if renovated to Motel 6 specs; air conditioning courtesy of a metal fan plugged into the wall, small thin soap bars in paper wrappers, and dishtowels in lieu of normal ones for drying oneself.. 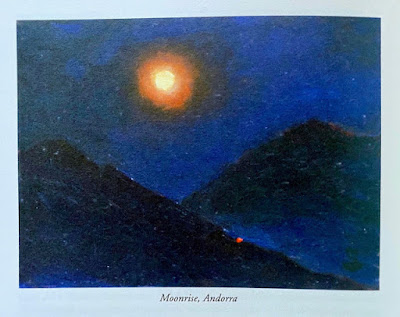 Inside the apartment, Van Stein unveils his painting of the mountains that separate Andorra from Spain.


“Looks like a pair of tits,” I say.   “Mammary Moonrise.  But what’s that light a third the way up of the left tit?”

“A house or something.  Anyway, the picture needed a dash of red—it’s a Winslow Homer thing.”

“People like a dash of red.  It helps sell a painting.”

Ravenous now, we descend scores of stone steps to where we’d stopped in pouring rain and begged directions from a tapas bar proprietor.

Two draft beers await us, and a feast of anchovies, calamari, octopus, and, best of all, thinly sliced jamon, cured and aged to perfection.

Our fatigue, in addition to hunger and thirst, is quenched, and we’re ready to ascend to Hotel Historic.

For me, a snooze in bed, no springs attached, while Van Stein tours the cathedral to absorb historical perspective for inspiration to paint through the night.

People in Spain eat late, especially in summer, so the restaurant recommended to us by the hotelier, on Placa de la Indepencia, is only sparsely peopled when we arrive at nine o’clock.

We sit in the open-air, a front-row table as dusk turns to night, when the young, old and middle-aged of Girona come out to play. 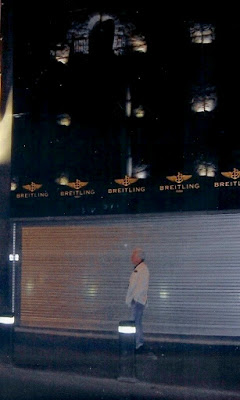 Girona is a college town, which explains the large number of trendy, beautiful young co-eds dressed to kill this warm Friday evening.

They travel in packs, outnumbering young guys, though the square abounds with young lovers holding hands and kissing.  It is mostly a native crowd.

Girona, at the height of summer, seems unspoiled by tourists.

The last people who tried to invade were the Moors, and they got buzzed off by a swarm of diseased flies.

Hence, Girona’s hero and mascot, the fly, is celebrated on fluttering flags throughout the city.

After a number of tapas dishes, washed down with local beer, we stroll the dark alleys, coming upon nook after cranny of open-air tables, beneath arches, on varying levels—in candlelight–maybe the most ambient and alluring stretch of street romance in Europe.

“Beats Andorra,” I say to Van Stein, crossing an iron-works bridge designed by the Eiffel Company of Paris.

Girona is a gem; perhaps one of Europe’s best-kept secrets.