I should have slept well, having been awake for so long, but could not find a comfort zone and finally gave up, got up and faced the Anchorage morning: pitch-black darkness at 7am.

Very dark is how it remains for the next couple of hours, with me watching it slowly evolve into dawn from inside a Starbucks built into the corner of an office building, voyeuristic glimpses through glass partitions of a mezzanine and work cubicles lit with white mercury vapor.

Van Stein joins me for long lattes before we amble to Hertz for organizing a getaway into the wild.

A second question, then a third, causes her brain-freeze, and we must wait for it to thaw before, wordlessly, she recommences computer-generated paperwork for releasing a Ford Escape to our custody.

Escape from Anchorage is precisely the point.

Especially after Alaskan Salmon Hash in Captain Cook’s breakfast room turns out to be potatoes with slivers of salmon that must be mined like gold.

We escape onto Route One, due south.

Our mission:  Traverse the Kenai Peninsula to the Homer Spit. 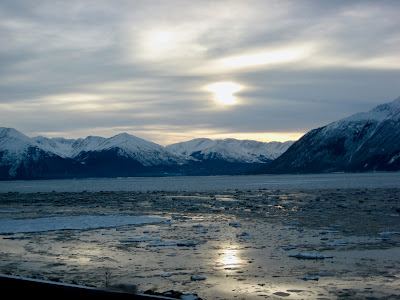 With Anchorage behind us, the Chugach Mountains open our collective spirit to the elements. 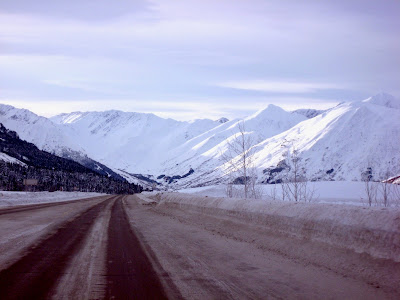 Traffic is light coupled with clear conditions along the highway, and every new road twist is another Christmas card, add a moose. 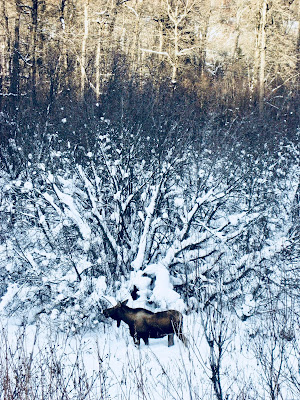 Cars have killed 140 moose in the past six months.

Other evidence—cars sunken in the snow, abandoned—implies moose sometimes get their revenge.

There is no hurry this day; we long ago resolved that the journey is what matters, not the destination.

We stop to stretch in Soldotna and soon after pass an orthodox church—in a town called Niniichik—that looks like a smaller version of St. Basil’s Cathedral in Moscow.

“Have we crossed into Russia?” says Van Stein.

In fact, the Kenai Peninsula was Russia’s first settlement and trading post in Alaska 76 years before the dumb-ass Russians sold this whole oil-rich territory to the United States.
Homer Spit, the second longest spit in the world, is a sliver of land jutting four-and-half-miles into Kachemak Bay. 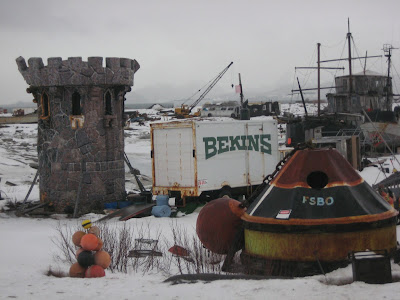 Homer apparently comes alive in summer with ramshackle mini-boardwalks, but now, in winter, is bleak and desolate, littered with abandoned fishing boats and empty buses from another era. 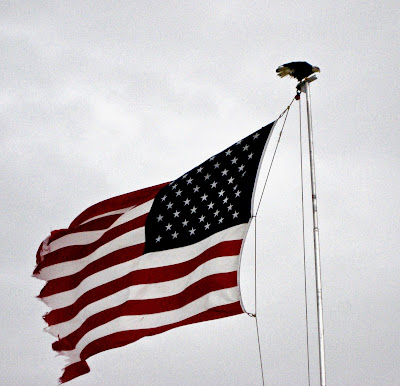 A lone bald eagle is perched atop the stars & stripes fluttering in a breeze from the bay.

We roll onward, to Land’s End Resort, which is deluged with participants from a cross-country ski expedition. 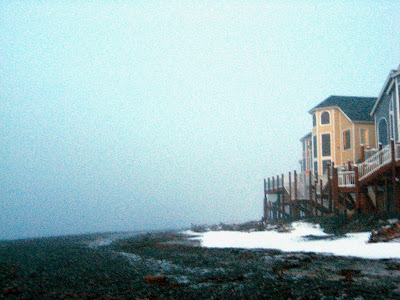 Nonetheless, we’re able to nail a condo with kitchen, living room, fireplace, and picture-window views of the Aleutian Mountains across Kachemak Bay. 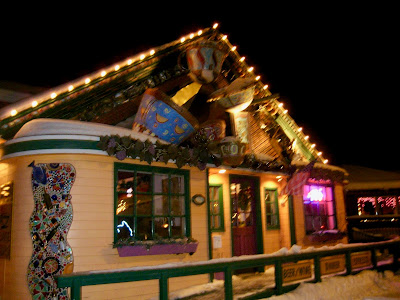 When darkness descends—early—we head back to the heart of Homer, a restaurant called Café Cups, decorated on the outside with large, colourful mad- hatter teacups.

Inside, it bounces:  a local crowd that recognizes an unknown face when they see it.

Sitting down, looking around, we realize this social hub sits on the fence between creativity and madness.

Their wine list is presented on the back of an original oil-on-board; their walls explode three-dimensionally with colourful arts and crafts.

But best of all is what they serve:  steamed clams in garlic broth, Alaskan Crab legs—no butter or cocktail sauce needed—wild salmon and halibut.

So many schools of halibut matriculate in Kachemak Bay they qualify for post-grad status.

It provokes me to announce that Alaska is one large mental institution, akin to Gheel in Belgium. 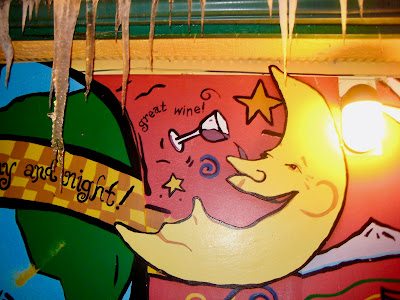 I am overheard, apparently, because on her way out a few minutes later, a woman hands me a portrait she has sketched of me captioned with these words:

Which reflects my sentiments precisely.

Or, as Mark Twain wrote, When we remember we are all mad, the mysteries disappear and life stands explained.