Awakening in Homer to a lashing rain, we roll to Captain’s Coffee for infusions of caffeine and local color, the latter painted boldly on this emporium’s ceiling, each panel its own visionary universe.

“Keep Homer weird,” says a bumper sticker on a car parked outside.   (Portland, Oregon uses the same slogan, though if you truly want weirdness i.e. eccentricity forget homogenized/pasteurized USA and aim for the UK, where people are people not sheeple.)

Next, a diner for eggs and biscuits smothered in gravy.

This being a Sunday, everything is closed except an old movie theater showing National Treasure at three and six o’clock. 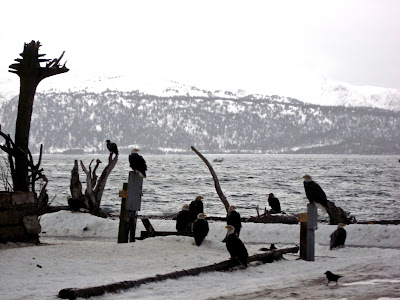 Back at spit’s end, bald eagles congregate, commiserating, perhaps, the mis-state of the union.

You can get as near as five feet to these stern creatures, which, this day, are all rain-drenched, and none too happy for it. 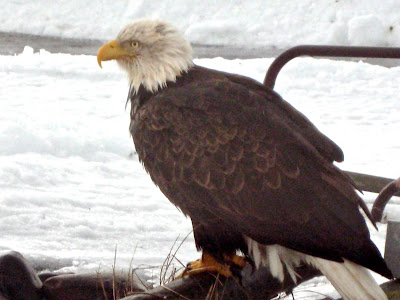 One of them glares at Van Stein, turns, lifts its back end and spurts a stream of green dookie straight at the artist. 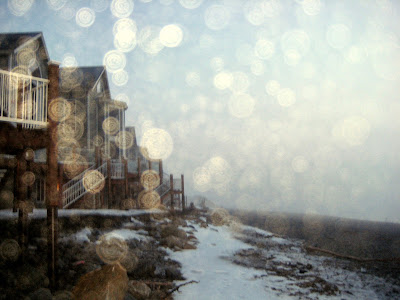 Van Stein responds by painting the Aleutian Mountains while trying to adapt to weather that changes every five minutes, and at 2:30 I venture off to Homer Theatre, where half the town turns out for the matinee (the other half is coming at six).

My imaginary friend, who reconnoitred while I movied, awaits me in the slushy parking lot.

We navigate through puddles and snow banks to a bar named Kharachters, whose patrons celebrate Homer’s motto:

A drinking village with a fishing problem.

Draft beer for my imaginary friend; George Dickel bourbon for me.

Immediately, Fred and Willy engage us.

Fred (everyone’s image of a rugged Alaskan with full beard, plaid flannel shirt and suspenders) has been drinking most of the afternoon and is probably stoned on pot as well.

He sidles up to me, pool cue in hand, about to miss another shot.  “Hey there, you silver-tongued rascal—you think we’re all crazy up here?”

Either word has gotten around this small town about my big mouth at Cafe Cups the evening before or he knows what they are.

Willy nurses a long whisky, which is to say a little whisky and a lot of water.

"This way I can make it last,” Willy says earnestly.  “I’m done with shots.”

Willy likes to sit at this bar for hours and hours, will probably close the joint tonight—and reopen it tomorrow afternoon, drinking alcohol as if he was on an IV drip.

A bulletin board post behind him identifies Willy as “Mis-manager” of Homer’s port.

“It’s a joke,” sighs Willy.  “We had a problem with a police chief, getting the city sued, but he’s gone now.  It’s a long story.”

We have to be gone, too, farewell to a bar so true to its name.

After a lonely dinner at Land’s End (the cross-country skiers had skied off) featuring salmon and halibut cryogenically preserved since the gold rush era, we head to Duggan’s for draft bitter and an old jukebox.

Exiting, Van Stein cannot resist spinning a propeller, which rings a bell, causing a character named Digger to run forth from the pool room, hooting, “That means you buy everyone a drink! Hell, I’ve been waiting all night for somebody to do that!”

Digger gets his due and we move on to Downey’s, “Homer Red” beer, and Neil Young crooning Harvest Moon from a jukebox while Dex, a local dude in a boony hat, plays pool with his imaginary friend.

A guy down the bar throws back Schnapps, offering shots to anyone who wants to join him. No one does.

The management evicts us all at midnight—and our plan to re-visit Kharacters is circumvented by the advent of a clear sky with shiny Full Wolf Moon, which beckons us back to spit’s end, where Van Stein reels in the moon to paint his finest work this trip while, in the distance, killer whales converse in whistles and squeals. 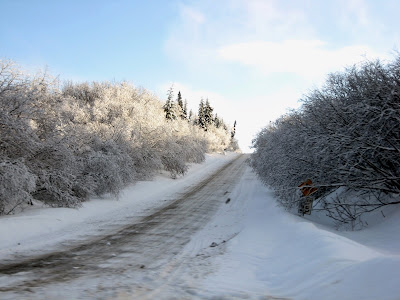 Next day, we retrace our tread to Anchorage where Captain Cook feels like an old friend. 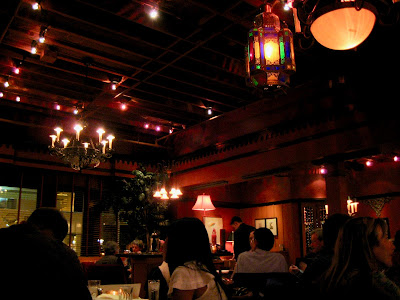 Following a round of cannabis-laced lollipops, we hoof to a restaurant called Orso, bourbon-ing at the bar until escorted to our table, where the salmon is wild.


Afterwards, a taxi to Chilikoots:  musky, dank, a touch of skank. 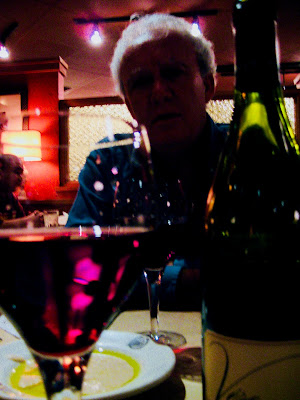 Draft bitter in hand, we roam Koots’ nooks and crannies—a carnival of grunge, pierced bodies, tattoos, bouncers with Mohawks, and a room featuring women’s panties dangling from the ceiling.

Leaving Van Stein with my imaginary friend by a fireplace, I take a bar stool far across the long room.

Ten minutes later they prance over.

“Something wrong?” asks my imaginary friend.

“Not a thing.  Sometimes I just need to be on my own.” 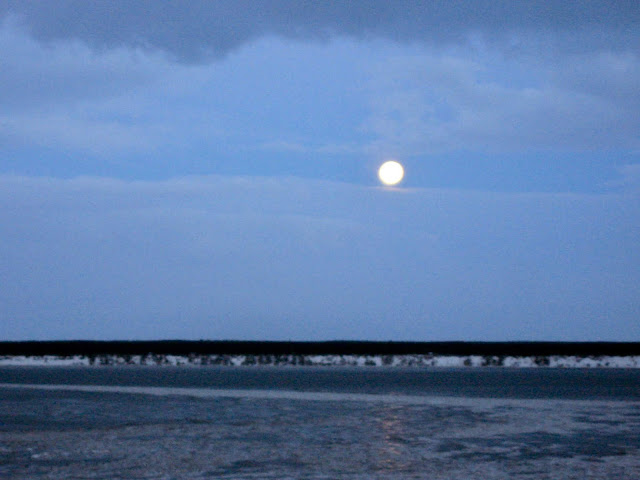