(In honor of Glenn Landon, whose birthday is today.)

In January, when no one in their right mind visits The Last Frontier, Van Stein and I engage.

(Eskimo proverb: “Glorious it is when wandering time is come.” And the time had come to wander.)

Two nights before departure, Van Stein enjoyed a wig-out in Lucky’s after Charlie Chaplin’s ghost spilled half a glass of red wine over his new linen jacket, shirt and blue jeans.  Consumed by mania, he exited Lucky’s without a goodbye and maintained radio silence for the next 24 hours.

But with military precision, Van Stein arrives at my Tree House 4:30 next morning ready to roll.  He was exhausted, he explains, and shouldn’t have been allowed out.

We pull off I-101 in Carp for Starbucks coffee and an ATM machine, but its camera takes one peek at Van Stein attempting to withdraw cash and freezes into lockdown.

“Can either of you name any famous Alaskans?” I ask Van Stein and my imaginary friend as we wait in the lounge.

Neither can name any.

“Because fame doesn’t matter to Alaskans,” I say.  “In fact, the two most famous Alaskans aren’t even Alaskan.  An Internet website lists Jack London as a famous Alaskan, though he wasn’t born there.  And neither was Joe Juneau, a gold prospector who founded Alaska’s capital city.”

“So why doesn’t fame matter in Alaska?” asks Van Stein.

“Because up in Alaska people grasp the vastness of everything," I reply. "And in comparison, they grasp their own insignificance. And, by extension, the insignificance of people in general. When people don’t really matter, fame is futile.” “But he’s famous.” Van Stein points to a portrait emblazoned on the tail of our Alaskan Airways jet.  “Nanook.”

“Who the hell is Nanook?”

“Nanook of the north—an Eskimo leader.”

My imaginary friend pipes up. “Fictitious,” she announces.

“You see,” I say to Van Stein, “you’re not going to get away with your nonsense this trip.  We have a brain.”

“Nanook is a mythological figure,” corrects my imaginary friend.  “From the Inuit.”

“Exactly,” says Van Stein.  “That’s where Mork was from.”

“No,” says my imaginary friend. “Mork was from Ork—and the face on that tail represents Joe Q. Eskimo.” 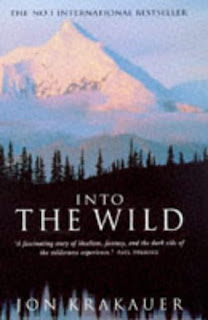 I’d bought along Into the Wild, an apt book by Jon Krakaur, and I conclude during the flight that protagonist Chris McCandless was mad—perhaps suffering an as yet unidentified mental malady that combines ego and death wish, with a dash of hatred for authority—probably the “lone-nut” formula so popular with those with brains (not sheeple) who try to solve mysterious assassinations.

One thing I’d learned in my research preparing for this escapade:  governmental authority and nature are two different animals; you can often get away scofflaw-ing the former, but ignore the latter at your own peril. 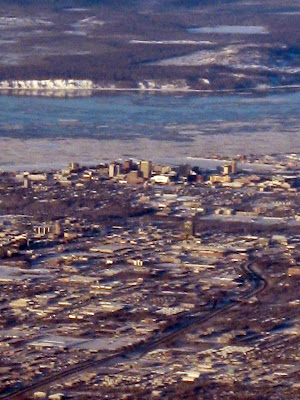 We fly into sub-freezing Anchorage, a city that takes its name from “anchoring” steamships—and home to half of Alaska’s 670,000 inhabitants.

The Wolf Moon is already up—a dull white ball, not quite full—hanging orb-like in the blue sky over the Chugach Mountains.

In our wallets, we carry calling cards I’d just printed:

Luna-Seekers, “We Moon Business.”
We climb into a taxi and pepper our cabbie with questions about Anchorage.

He seems to know nothing about anything, but smiles and nods (self) indulgently in place of providing simple answers. 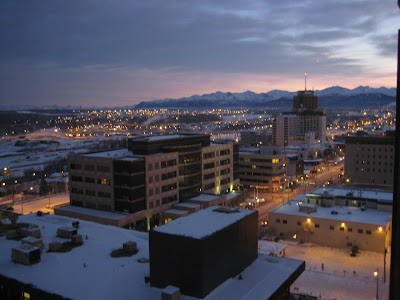 Urban Anchorage, we soon discover, is a mishmash of strip-malls and contemporary eyesores.

What is it about we humans that compel us to choose nature’s most beautiful settings for constructing the most hideous buildings in which to work our bones or rest them?

We had witnessed this phenomenon in Sedona seven months before.  It is even more disconcerting here, a city that should pulsate, as Alaska’s largest, but instead is eerily still and quiet.

In other words, a lot like Reykjavik—but without Iceland’s glacial chic.

Once ensconced on the 17th floor of Hotel Captain Cook, Van Stein preps his palette. 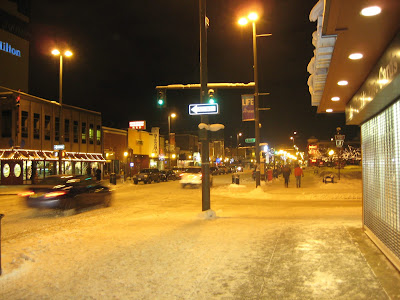 My imaginary friend and I trek around downtown.

Most of the retail stores have the look of thrift shops, their goods clustered haphazardly in display windows, lacking any design sense (or any sense, generally).

(These folks don’t much care about ruining rural settings in pursuit of their prize—oil and oilmen—so why should they care how monstrous their office blocks and hotels look?) 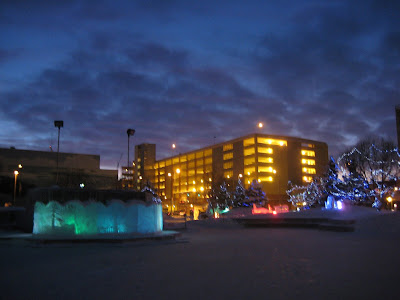 Stray one block from Fourth or Fifth and you’re obstructed by one of many multi-story car parks, which surround the center as if they are some kind of modern-day fortification to repel a foreign horde.

But no foreign horde in their right mind would want to take possession of this place.
The Crow’s Nest is a three-diamond restaurant atop Captain Cook with commanding views of the city.

Problem is, even with three mountain ranges, this gateway to Alaska has all the charm of a petrochemical plant.

Because Anchorage is where natural beauty meets urbanity at its most grotesque. 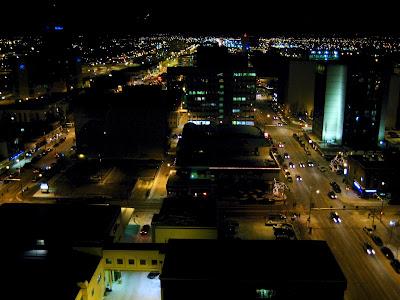 This city should be called The Grid; it is mapped out on a grid more tightly framed than mid-town Manhattan.

Its natives, we determine, are Gridders.

We’d already had several brushes with them—the cabbie, a pair of receptionists, the concierge and assorted shopkeepers—all uniformly numb and dull and indifferent.

Nobody knows nothing, either oblivious to their own environment—or they do a great job feigning ignorance.

It explains why many Americans who run away from their misdeeds wind up in The Last Frontier:

Because not only is it remote, the locals are either genetically reticent or behaviorally closed-mouthed.