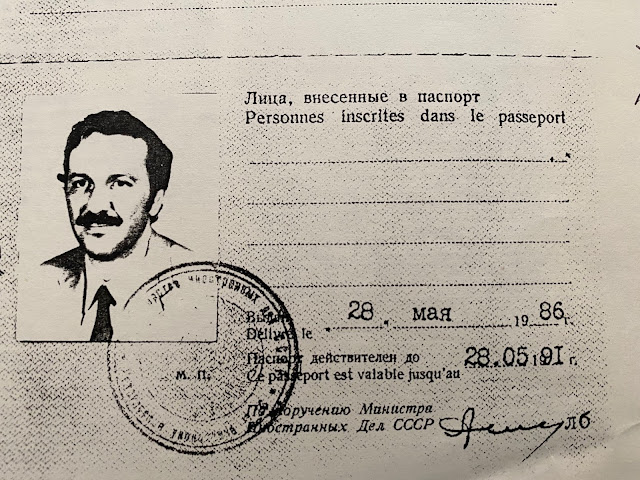 Alan Sultan was guzzling a beer when I arrived at Montgomery's Grille, about 4:15 p.m.

"Are you going to buy me a birthday drink or what?" I asked.

I opted for a glass of pinot grigio.

"I'm convinced we should do Edward Lee Howard's book," said Sultan. "But do you really believe Howard's story that he didn't help the Russians until after he was forced to flee?"

"But I still wonder if he started off as a spy.  What do you think?"

"I'm inclined to go with the evidence," I said.  "Howard was identified by a Soviet defector named Vitaly Yurchenko, who also identified Ron Pelton, an NSA engineer. And Pelton admitted his guilt."


"But if we publish Howard's book, won't people say we're capitalizing on treason?"

"People can say whatever they want."  I shrugged.  "It's a publisher's job to publish interesting books.  Howard's story is a piece of espionage history."

Sultan had another concern.  "We have to assume Howard may run a background check on us.  What will he find on you?"

"Well, I guess he might discover I was William Colby's literary agent."

(Colby had been CIA Director in the mid-1970s; I represented him as a literary agent for the placement, with Contemporary Books, of his 1989 book on Vietnam, Lost Victory.)

"That's what I was thinking," said Sultan.  "I don't think Howard would like that."


"I wouldn't worry about it," I said.  "Even if the Russians check you out—and that's iffy because they probably can't stomach Howard anymore—the most they'll do is send a flunky up to your office to make sure National Press really exists."

Next morning brought a call from FBI Headquarters, Allyson G.  "There's a guy in our office out west who wants to talk to you."

John H's name was all over Ed Howard's book proposal; he, the FBI Special Agent tasked—long-term—with tracking the fugitive traitor.

John H had even met Howard in Sweden and, face-to-face, made a pitch for the turncoat to come home, face the music.

This case, at the top of John H’s docket, was his passion.

"I'd like to meet with you and discuss the legal ramifications of what we're talking about here."  John H was low-key, soft-spoken.  "I have to tell you, I was negative on this when I first heard about it.  But then I learned all the details and I've come around.  I'm in Albuquerque.  I'd like to give you a ticket to fly out here.  Would that work for you?"

No, it would not work for me, I said.

I suggested, instead, we meet in Washington, D.C.

I wasn't about to go charging off anywhere, expending time and energy, until we agreed ground-rules.

Posted by Robert Eringer at 8:18 AM