14. EDWARD LEE HOWARD: THE INSIDE STORY

John H had never been stationed in Washington, D.C., had no desire for such a posting, and when he visited, did his business and got out of town as fast as possible.

Initially, John H couldn't get into this Holiday Inn, only one mile from my home near Chevy Chase, because rooms allocated for special U.S. government rates were booked.  So he'd made a contingency reservation at a Marriott in downtown Bethesda, Maryland.

"I have to do it that way," John H told me.  "If I pay full rate, the difference comes out of my pocket, thirty or forty bucks."

And I was trying to turn this outfit into a paying client?

John H called Holiday Inn one last time and discovered they offered a rate cheaper than their USG special, so that's where he lodged.

John H confirmed his presence down the road.

(Punctuality, a principle of good intelligence work, could have been John H’s middle name.)

John H opened.  He wore slacks, black wing-tips, and a tie patterned with Mickey Mouse.  My kind of guy.

We shook hands and seated ourselves at a small round table by the window, overlooking the hotel's parking lot.

If John H had a full head of hair, he'd have looked about 35, ten years younger than his actual age.

"The assistant U.S. Attorney, Bob G, is flying in this afternoon," said John H.  "He has to visit Headquarters, meet with people about this situation, and he wants to meet you.  It's very important that you did not initiate this book project with Ed Howard.  Otherwise, a judge might say we entrapped him."

I shook my head.  "It's Howard-initiated.  Not only, National Press came to me."

We hunched over leather folios and I ran John H through the events that had brought us together this cool, wet October morning.

"Let me tell you something about Ed," said John H when I'd finished.  "I've studied him for a long time, eight years now.  He's a good liar.  Ed has lied his whole life, and it was lucky that the final polygraph beat him, because he'd been lying for years, and he's still lying.  Did you ever get a copy of the book proposal?" 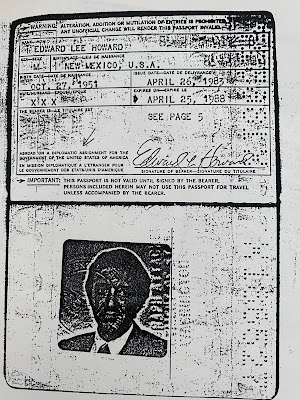 I also had a copy of a fax Howard sent to National Press inviting us to visit him in Moscow, which I produced for John H.

It was signed Mr. Roumanis, whom Howard said was the director of his consulting business, Westar, and included telephone numbers for Howard's apartment, his dacha, and his assistant, Larissa.

"Do you know who this assistant is?" asked John H.

"He mentions Larissa in his proposal."

"Her name is not Larissa," said John H.  "It's Lena Orlova.  She's Russian, was married to an American defector from the U.S. Navy named Glenn Michael Souther, who committed suicide.  After Souther's suicide, the KGB moved Lena near Howard and they met, became lovers, and now she's his assistant."  John H glanced at the invitation, back to me.  "And this guy, Roumanis? Do you know who he is?"

I shook my head. 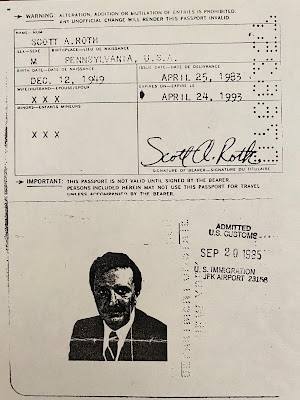 "Roumanis is Howard.  An alias.  Let's move on.  There's a difference between insider stuff and classified stuff.  I'm going to give you an insider overview about where we're at on this case."

"It's never been reported, not even by David Wise in his book about Ed, The Spy Who Got Away, but we were just about to issue a warrant for Howard's arrest when he escaped.  It was his sheer good luck to have chosen that weekend to escape.  The arrest warrant should have been ready the week before, but got delayed by some grand jury hearing.  So the warrant wasn't issued till Monday.

"By that time, unknown to us, Howard was gone.  We feel we've got an airtight espionage case against Howard before he escaped, and there's an important delineation between pre- and post-September 1985.  The way our case is written up, it's all about his espionage activities before September 1985.  We're sure we can convict him on that.  But we have never developed an espionage case for what he did after September 1985.

"That's where you become important.  We may want to build a whole new case about his espionage post-September 1985, try him on both, and the crux of that would be his own admissions in his book proposal and whatever he tells you."

"We'd like to get updates on Howard's relationship with the Russian security services," John H continued.  "For instance, what's the fall-out of the most recent events?"  (Russian President Boris Yeltsin had just disbanded Parliament.)  "At what point is the right time to ask (the Russians) for Howard?"

That, in a nutshell, was the FBI's strategy on Howard:  At an opportune political juncture, perhaps with some incentive, cajole the Russians into turning him over.

"This assistant I mentioned, Lena Orlova," said John H.  "We'd like to know the details of their current relationship."

I scribbled a note.

"The idea," said John H, "is to draw Howard out, get him talking in these areas.  Is that how you see it?"

"In his proposal, Howard says he's going to write about the KGB.  I'd like to draw him out on that and say, Hey, maybe we should talk about the KGB in a place they can't hear us, like Zurich.  Or maybe Poland.  If he'd meet me in Warsaw, maybe I'd be able to get him up to Gdansk, get him drunk, onto a boat, into international waters, bam, we got him."

"I like the way you're thinking," said John H.

"It all comes down to how bold and daring you guys want to be," I said.  "Just tell me where you want him.  It'll be my job to get him there."

Talk turned to Howard's book proposal.  "I don't know if I should be telling you this."  He paused, spread an open palm across his forehead, trying to separate insider from classified information.  "I have to be careful here, but... Howard has already written a manuscript. I’ve seen it."

"Uh, I have to do this without getting into sources and methods," said John H.  "That's the classified part.  He wrote it about a year ago.  It's poorly written.  He's not a good writer.  And it's different from what your notes say are in this proposal."

"How different?" I asked.

"For a start, there's nothing about the Black Box"  (the secret mission in Moscow for which CIA had specially trained Howard).  "The Black Box and other things in his proposal are classified information," said John H.  "Just by telling someone this stuff, Howard is breaking the law.  And his literary agent is breaking the law by being told this stuff."

"So I guess that means I’ve broken the law, just by reading it," I said.

"At the moment," I said, "National Press wants to publish Howard's book next spring, only eight months from now.  I thought such an idea was ludicrous, not least because I hear Howard drinks a lot.  But now you're telling me there's already a manuscript, it becomes very feasible."

"Where did you hear Howard drinks a lot?" asked John H.

"Your colleague, Nick W.  And doesn't Howard call the U.S. Attorney to try to cut a deal?"

"Where did you hear that?"

"He wanted to make a deal.  I told him, the Bureau does enforcement, we're not allowed to make deals."

New subject:  My expenses.  When I travel to Europe to meet Howard, a business-class seat and fine hotels.

"I usually fly first-class," I said.  "Hell, when I went to Europe three weeks ago for a client I flew Concorde, both ways.  But it isn't just that," I added.  "If you want to sting your target, you've got to throw money around, show that you travel in style.  Put yourself in their shoes:  who wants to do business with someone on a budget who watches their pennies?"

(This I'd learned from Moon0, the ace IRS sting-undercover specialist.)

"About how much is business-class to Moscow?" asked John H.

He noted this.  "How many trips do you think will be necessary?"


As if I wanted a bunch of free trips to Moscow.  I'd been before; it was definitely not my destination of choice.

John H put down his pen, leaned back in his chair.  "In Division Five, the foreign counterintelligence division, we have a number of assets," he said.  "Most of them help us for free as patriotic citizens."

"I respect that," I said.  "But I do private-sector intelligence for a living.  I view you as a potential client.  I'd need a grand a day to work this."