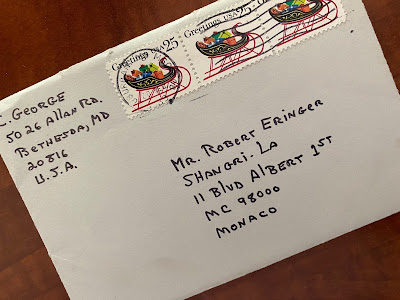 One day in December of 1990, while I was still residing in the Principality of Monaco, a handwritten letter arrived from Clair George.

He wrote of two consulting contracts, adding, The projects I’m on may interest you.  I think it’s important to get together when you are next over here or I’m out your way.  Let me know your plans.  We will do something together yet.

It made my day, providing me hope for the future, as I had grown weary of Monaco and needed a new direction.

So I cut plans to visit Washington in April.

When I notified Clair, he graciously booked a room for me at the Chevy Chase Club, the DC area’s most exclusive country club, of which he was a member. 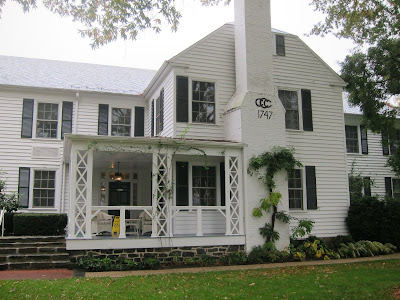 I checked into Bradley House, a two-story structure of simple, elegant rooms appointed with colonial furnishings, and Clair met me in the club's Winter Center for lunch.


This high-ceilinged multi-purpose lodge was the club’s casual hub, though not casual enough for blue jeans or cell phone use.  Caught twice violating such rules and the management ran you up the flagpole.

We ate hamburgers and chatted about my plan:

I wanted to move to Washington, where I had briefly attended The American University fourteen years before.

Clair introduced me to a realtor, an old family friend; she toured me through the neighborhoods of Chevy Chase and Bethesda. And two months later, I returned with my wife and young daughter to search in earnest for a house to rent.

Again, Clair graciously put us into his club.

He and Mary provided much advice, information and connections for settling into a Washington existence.

Clair always concluded most phone conversations with, “Is there anything else I can do for you?”  And he truly meant it. 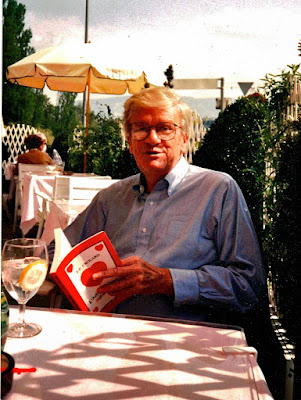 That summer, sitting in Adirondack chairs overlooking the club’s immaculately landscaped golf course, sipping mint juleps, Clair said, “I’m probably never going to write a book.  With your sense of humor, you’ll do okay.  But maybe we can do something else together.”

“But only for billionaires and royalty,” I quipped, tongue-in-cheek.

In truth, it sounded a lot more fun and profitable than the book business.

And that’s how our creative problem resolution enterprise began.  As a joke. Lubricated by bourbon and mashed mint leaves.

Clair and I also agreed that we would accept assignments only if they possessed a high Laugh Quotient, or L.Q. for short.

Simply put, our motto became:  If it ain’t funny, we won’t do it.

“Okay” said Clair.  “We’ve got brains, contacts and a phone number.  Now all we need is clients."

In fact, Clair already had a client, to which he had cryptically referred in his letter to me:  Barnum & Bailey Ringling Brothers Circus.

Post-CIA, Clair could have sat on White House panels, or joined a think-tank, like many of his contemporaries.  But he would have found those pompous Temples of Pontification boring.

Instead, he tried to help acquire holy grails for the circus:  a panda from China, a white elephant and acrobats from North Korea.

Clair did not have an office.  The whole of downtown Washington D.C. was his office.

He would spend the day “floating around” (his parlance).  This was, of course, before the days of pocket-able cell phones.

He might float from a meeting at the Pentagon to the White House, then to lunch, and on to the State Department, stopping along the way at public telephones (he knew them all) to check messages on his home phone answering machine, check in with various persons, myself included, before floating home late in the afternoon, at which point his wife’s social calendar took priority.

Over the next six weeks we met, talked on the phone, and deliberated about working together as problem resolution specialists.

To quasi-officialize our new business relationship, we printed a card with a mission statement and contact details (never used), and we opened a bank account, on which we were both signatories, at Madison Savings & Loan on Massachusetts Avenue in Spring Valley, northwest D.C.

Afterwards, we lunched around the corner at DeCarlo’s, Clair’s favorite neighborhood restaurant, which became our de facto office for meetings.

Aside from the cost of a meal, we had no overhead.  No secretaries, no advertising, nothing.

After I moved into a townhouse on Westbard Avenue, a half-mile from where the Georges resided in the Westgate neighborhood of Bethesda, something fell serendipitously into my lap of deep concern to The Circus.

The ensuing assignment lasted five years and wound up in court for almost twice as long, providing one of the finest learning experiences of my life.  A condition of settlement is that I am precluded from ever writing about that mission—a great pity, as only the plaintiff’s side was ever told in the media.

That December, Clair and Mary invited my wife and I to their 35th wedding anniversary bash at the Chevy Chase Club.

One of Clair’s close friends befriended me and took delight in pointing out all the biggest names from the CIA, current and retired.

I chuckled at the notion that not even Halloween could produce so many spooks.

And I felt extremely privileged to be among them.

Posted by Robert Eringer at 7:08 AM