Flash-forward three years, to the last day of September 1993.

The bar inside Montgomery's Grille in downtown Bethesda, Maryland is quiet when I arrive to  nail a stool and order a vodka martini.

Wayne the barkeep, a character out of Animal House, says they're out of olives.

Out of olives?  What kind of bar was this, anyway?

Joel Joseph of National Press Books was late for our five 0'clock rendezvous.

Truth be known, I didn't care if he'd forgotten.  I was in the mood for a quiet cocktail, which I'd savor this warm afternoon and be gone.

But as I sipped my martini, Joseph appeared with his partner, Alan Sultan.

The specialty of this duo's ten year-old publishing house was political intrigue.  They had, most recently, published a book by James Earl Ray, the convicted killer of Martin Luther King.

Joseph was mid-40s, graying mustache, with a paunch exaggerated by tight blue jeans.  A lawyer by training, Joseph was civil-liberties-minded and a devotee of the first amendment.  Years earlier, he had been part of a legal team that defended conspiracy theorist Lyndon LaRouche.

Sultan was about fifteen years younger than Joseph; slim with a swarthy complexion, thick jet-black hair and trimmed beard.  He was the bean-counter at National Press, and its conscience.

Months before, I'd jocularly suggested to this publishing pair that they create an imprint called Ball & Chain Books as an outlet for celebrity prisoners around the world.

They had been trying, for several years, to lure me into their mix as an investor.  (How do you make a small fortune?  Invest a large fortune into book publishing.)

I'd explained my philosophy about the book biz:

Each book is a business unto itself.  Bring me a single book that has serious money-spinning potential, maybe I'll pitch in.

So Joseph had telephoned me a few days earlier to say he had found such a book, was I still interested?

"Arafat," Joseph replied.  "We have a writer from Penthouse magazine who knows his people."


I'd been through this kind of publishing quagmire once before, with Poland's Lech Walesa, whose disparate representatives had made three simultaneous exclusive deals, including one with me. 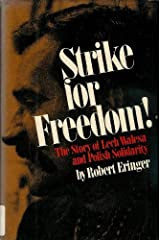 Strike for Freedom: The Story of Lech Walesa and Polish Solidarity by Robert Eringer (1982-11-03): Amazon.com: Books

So there we sat in Montgomery's Grille, Joseph and Sultan sipping white wine.

"Did Joel tell you about our new book project?" asked Sultan.

"No," said Sultan.  "Something a lot better came in yesterday."  He cued his business partner with a glance.

"Have you ever heard the name Edward Lee Howard?" asked Joseph.

"Sure," I replied.  "The only CIA guy ever to defect to Moscow."

"He wants to write a book," said Joseph.  "We have his proposal."

But not for the same reason as Joseph or Sultan. 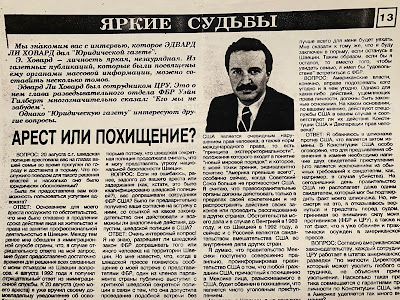 I was interested in nailing this traitor and putting his butt behind bars.


After all, a much worse fate had befallen Adolph Grigoryevitch Tolkachev, the Russian scientist and invaluable CIA asset whom Howard had maliciously betrayed to the Russians.

Tolkachev had been executed.

"Howard says it wasn't his fault that he ran to the KGB," said Joseph.  "The CIA put him in a corner and he had no choice.  He says he's the only guy who's ever been trained by both the CIA and the KGB in spy tradecraft.  And get this, the KGB chief who took Howard under his wing, Vladimir Kryuchkov?  He's the same guy who led the putsch against Gorbachev in 1991.  You've got to see the proposal."

We had known each other for over five years by this time and had been working closely, for the past three, as independent contractors on several private-sector intelligence projects.

"You know the name Edward Lee Howard?" I asked.

"You kidding?" Clair was DDO in 1985, the so-called Year of the Spy, when Howard defected to Moscow, leaving CIA headquarters in turmoil.

"He wants to write a book."

Posted by Robert Eringer at 6:27 AM