In the midst of handling our main mission for Barnum & Baily Ringling Brothers Circus, the former CIA spymaster Clair George and I took on a second client:

Harry Schultz, a reclusive multi-millionaire American who had expatriated himself in Monte Carlo as part of his ongoing struggle to evade Big Brother.

Schultz espoused his so-called PT Philosophy, which he claimed to have conceived.

PT, to his thinking, was supposed to stand for Perpetual Tourist or Permanent Traveler or Prepared Thoroughly.

But it really means Partly Tetched, at least as Harry practiced it, because he rarely left Monaco, the second smallest country in the world, about a mile-and-a-half square.  (The Vatican is the world's smallest country.)

On top of that, it was the Romany (gypsies) who had originated the PT lifestyle, and they’d been doing it for centuries, though no one ever had the cojones to tell Harry PT philosophy was not his original ideation.

From his ivory tower in Monte Carlo, Harry dispensed financial advice (“buy gold”) to those willing to pay $800 for 15 minutes, telephonically, of his time (said to be a Guinness World Record).

Harry felt most at home surrounded in his home office by stacks of newsletters and incoming faxes while analyzing stock trends, commodity prices and the foreign currency exchange market.

I’d gotten to know Harry while living in Monaco. 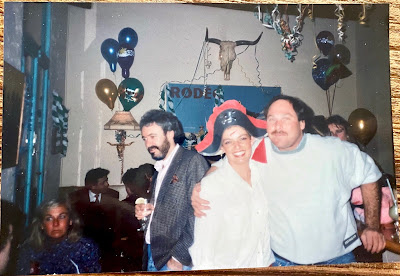 The only time he’d ever relax was when I’d take him out to Le Texan, a local Tex-Mex watering hole, where I’d cajole him into drinking a beer straight from the bottle.

He once looked at me in awe, beer bottle in hand, and said, “You practice what I preach,” referring to my independent devil-may-care approach to enjoying life.

Harry was somewhat paranoid, having convinced himself he could never return to the United States, United Kingdom, or Ireland, for reasons he would never specify.

So although he espoused freedom, Harry's own world became smaller and smaller with each passing year.

Harry had created an organization called Freedom Inc., purportedly to help crusade the cause of freedom against worldwide tyranny and oppression.


But his partner in the freedom biz, Larry Abraham, spent the organization’s money—funds raised at a grassroots level—on first-class travel and gourmet meals without little else to show for it.

One of the donors, a Texan, had grown irate by Freedom Inc.’s high expenditure and lack of results.

Through an ex-employee of Harry’s, the Texan had managed to get hold of Freedom Inc.’s mailing list, and with it he'd mounted a letter-writing campaign, accusing Harry and Larry of fraud.

Harry cried "Tilt!" (his favorite expression when something would go askew), hired a lawyer in Texas and filed a libel suit against his detractor.

The Texan countersued, and Harry soon found himself entangled in expensive litigation at the greater cost of what he valued most:  his privacy.

Case in point:  The second question asked of Harry during a telephonic deposition was where he lived.

“Uh, why do you need you know that?” Harry replied.

So Harry wanted to bail from the case he had initiated.

His brief for Clair and me was straightforward:

Get the antagonist to cease and desist.

Off and running on two grand a week (one for Clair, one for me), I telephoned the antagonist and introduced myself as the freelance journalist I once was.  I feigned interest in the controversy surrounding Harry Schultz.

“Fraud has been alleged,” I said. “Do you know anything about that?”

Did he know anything?

Whoosh!  Out it flowed, as if I'd opened a fire hydrant.  My only problem was getting this guy to shut up long enough to keep my notes straight.

Within minutes, the antagonist confided what he was doing, thinking, and thinking of doing—along with his entire legal strategy.

After analyzing the situation with Clair, I wrote Harry a report that confirmed his worst fear:

The antagonist had too much spare time.  He was unmarried, had no kids and no hobbies.  Legal costs did not concern him; indeed, he perceived litigation a worthy recipient of his disposable income; an investment in a determined quest to expose Harry Schultz as a thief and a fraud.

Our advice to Harry:

The best way to spoil this guy’s party is drop the libel suit and maintain total silence; any attention whatsoever served only to stoke his fire.

But Harry, being Harry, wanted a resolution that required the antagonist to pen no further critical letters about him.

“Harry,” I countered, “It’s not like he’s publishing bad stuff about you.  He’s just writing letters.  Read a poem called If by Rudyard Kipling.

"The most dignified response would be to ignore his accusations.  Without your attention, he will grow bored and move on to something else.”

The problem with Harry:  he relished a good fight.

Two centuries earlier, Harry might have invited his antagonist to a duel—though I doubt he would have appeared on the appointed day.

Harry wanted punishment dealt to his antagonist, by proxies.  Truth be known, he wanted the guy’s legs broken—or, at very least, he desired that a high-pitched whistle be blown into the antagonist’s ear over the phone at three in the morning.

After all, Harry reasoned, the antagonist “caused me stress,” which had evolved into vertigo, rendering him chronically cranky.

I patiently explained that Clair and I did not do mayhem.

Finally, Schultz took my advice.  He withdrew his lawsuit and ceased all contact with the antagonist, who quickly got bored and disappeared.

Clair and I broke the first rule of problem solving:  we actually endeavored to solve a client’s problem, and usually did, resulting in a satisfied client that no longer needed us.

Not so fast, said Schultz.  He had another problem.

(Clair and I quickly discovered that when we solved a problem, we became even more in demand than before.)

Harry’s other problem:  A rival in the financial newsletter business was badmouthing him among industry insiders.

Our advice:  ignore him.

But Harry wanted blood.  Or, at very least, he wanted the badmouthing to stop.

I began cutting plans for the spymaster and myself to fly to Europe to meet Harry face-to-face in Monte Carlo.

The only way Harry would otherwise communicate was by fax, and he, by now, had deluded himself into believing that all his facsimile communications were intercepted and monitored by the powers that be.

He pledged to pay half our travel expenses; what we needed was another client to pay the other half.

And one soon materialized.

But first, back to the person bad-mouthing Harry.

On the principle that persons who live in glass houses ought not throw stones, we mounted an investigation of Mr. Badmouth.


This we sub-contracted to Moono, an investigator retired from the Internal Revenue Service.

I’d met Moono a few years earlier when we tried to package a book about his career as the IRS's ace sting-artist.

Within two weeks, Moono uncovered very much dirt, both professional and personal.

Court documents did not paint a pretty picture of life within the Badmouth household.

Armed with Moono’s findings, I used a pretext approach to contact two sources—an ex-wife and a former business associate.

They both said they couldn’t come up with words bad enough to describe Mr. Badmouth, but nonetheless used these words:  horrible, vicious, schizoid, monster.

The ex-wife told me Mr. Badmouth “keeps a Nazi flag in his bedroom dresser and listens to German march music on Sundays.”  She added,  “I was like a lamb going to slaughter.  After we got married, I wasn’t allowed to open the door without his permission, and he had security guards to prevent me from leaving.  I was in shock for two years after the marriage.”

The former business associate told me that Mr. Badmouth evaded U.S. taxes by keeping $10 million hidden in an account at a bank in Basel, Switzerland.  He supplied the name of the bank along with Mr. Badmouth’s personal banker.

Mr. Badmouth had also created a PAC (Political Action Committee).  But all the money he raised from widowed grandmothers went straight to his account in Switzerland.

A quick check with the Federal Election Commission established that, indeed, such a PAC had been registered, and indeed, not a single contribution had ever been made to any political candidate.

One, both were newsletter publishers, and two, they treasured their privacy above all else.

I huddled with Clair.  He concurred with my plan, and Harry approved it.

I thus began sending a series of anonymous faxes to Mr. Badmouth’s office, where he employed a staff of seven.

These were open letters to Mr. Badmouth letting him and, more important, those employees who got to it first, know what we knew about him.

Mr. Badmouth could, of course, guess that the sender connected somehow to Harry, but so what?

Quite probably, based on what we had learned about Mr. Badmouth, he had many other enemies.  So it might have been difficult for him to distinguish from whence the onslaught came.

I sent three such communiqués, cheekily written, spaced out to arrive through the week. 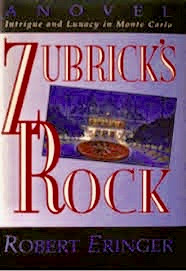 I later turned Harry into the star of my 1995 novel, Zubrick’s Rock.

As Barry the Lamster, a reclusive multi-millionaire based in Monaco, Harry tries to stage a coup d’etat in the principality by resurrecting a descendant of the Spinola family, which ruled Monaco many centuries before the Grimaldis ousted them.

This became habit-forming for me.

Adhering to the principle It’s all grist, many of my adventures with Clair became the basis for my novels.

I’d put real situations and characters through a meat grinder to produce absurdist fiction, though, I dare say, true life was absurd enough.

Clair read my manuscripts and claimed they made him laugh out loud.

The former spymaster called me his own personal novelist.

So Zubrick, who has always wanted his own country, plots to overthrow the picturesque principality.
With the assistance of a former CIA official, Zubrick schemes to seize Monaco "legitimately" by tracing a descendant of the Spinola family, which briefly ruled the principality over 700 years ago - and installing him as the true prince.

Enter Gerry Spinola - dentist, gambler and alcoholic from Hoboken, New Jersey - and the only heir Zubrick can dig up on short notice.

Zubrick cuts a deal with Spinola to become his puppet.Stirring a retired general and a band of soldiers-of-fortune into his mix, Zubrick assembles the ingredients for a coup d'etat.

Posted by Robert Eringer at 6:58 AM