In early November we learned that the Prince’s senior aide-de-camp, Bruno Philipponnat, was instigating a plan for the Prince to visit Azerbaijan.

By this time, we knew Philipponnat abused his position by befriending the Prince’s personal friends.


The danger, it seemed to us, was that the Prince’s personal friends—in association with Philipponnat—would use access to the Prince as a means to make business deals, from which they stood to profit, and from which Philipponnat might also profit financially.

In this instance, we looked at two friends in particular with whom Philipponnat had become close:

Munsch was overheard to say (in the Bar Americaine of Hotel de Paris) that he needed to “get Albert to Azerbaijan” so he could make "a lot of money in an oil deal."

Thus, when I next met the Prince, on November 21st in Hotel Columbus, I had some questions:

Would it bother you if close personal friends of yours were making money through taking advantage of their relationship with you?

Would you want to know about it?

Would it bother you if persons in your employ abused their positions to receive commissions, kickbacks or silent partnerships?

Would you want to know about it?

The Prince answered yes to all.

Thus, with the Prince's explicit permission, we added Messer’s Munsch, Haskins, and Albert’s own aide-de-camp to our ever-widening radar screen.

SIS had requested a meeting with the Prince, so we were joined by one of their division chiefs.

This time SIS tried a different tactic in their strategy to cut around the middleman.

Could the Prince, they asked, introduce them to the head of the Monaco Banking Association?

The Prince countered by suggesting they meet Monaco’s finance minister and offered to arrange an introduction.

Soon after, I derailed this, as I felt it inappropriate to allow a foreign intelligence service to cultivate a government minister or high-level source within Monaco’s banking system.

The Prince concurred that I instead tell this to SIS:

“We have devised a more appropriate, more effective system for dealing with your requests.  You make known to me what specific information you are looking for.  If we feel such information can be shared with you, the Prince will request such information from the relevant official and I will pass it on.”

I saw SIS out and, minutes later, ushered in Bill Murray from CIA.

Murray offered the Prince briefings on any country the Prince expected to visit and also invited him, and me, to visit CIA headquarters for briefings by various experts on money laundering and terrorism finance.

After Murray departed, my deputy and I conducted a comprehensive briefing for the Prince on members of the Pastor family, locally known as “the second most important family in Monaco.”

Before we adjourned, the Prince broached a subject that he announced to be of deep concern to him:  the influence of Freemasons in Monaco’s government and police department. 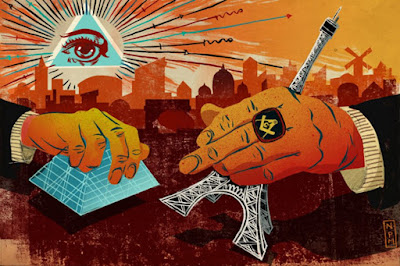 Albert was particularly troubled by the notion that promotion within the principality’s government ministries and police department was being based not on merit but on Masonic membership.

He explained that he had recently been invited to an upcoming Freemason event in Cannes, which he’d declined.

I concurred with the Prince’s wisdom, recommending that, as royalty, he should remain above the fray and free of any such attachments.

An investigation of French Masonic lodges became our next requirement.

Afterward, I lunched with Bill Murray.

The FBI, he told me, had finally taken an active interest in MING—but only after he, Murray, offered to take it off their hands and run it as an intelligence operation instead of a criminal investigation.

In late November, I flew to Washington D.C. and updated U.S. Senator Saxby Chambliss on MING.

The Senator, who was close to President George W. Bush, remained fascinated by MING’s purported connection to PFIAB.

It became even more fascinating when MING phoned me from LAX on December 12th.

“I’m flying to Washington for a PFIAB meeting,” he said.

“You’re a member of PFIAB?” I asked him.

It was easy for me to determine that MING did not sit on the President’s Foreign Intelligence Advisory Board, even though member names were supposed to be shielded from public view.

It was even easier to identify all staff members on PFIAB.

MING was neither on the board nor a staff member.

Which, instead, made him a liar.

Yet PFIAB would indeed convene its annual meeting on December 17th and 18th, and MING, we confirmed, was truly booked into the Hay-Adams.

So what was going on?

From his days in the military, MING probably knew a current PFIAB board member or staffer.  He would wine and dine this individual and glean all that he could about whatever PFIAB discussed.

If MING was spying for the Russians, PFIAB was his target.

I tried my best to reawaken the FBI, but they remained in deep slumber—and MING pulled off his PFIAB gig without a hitch.