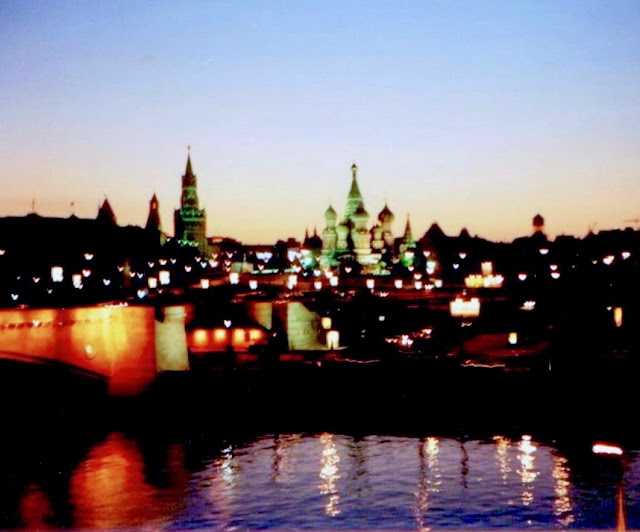 
My Air France flight from Paris to Moscow was a slow three hours and 15 minutes; a path that took us over Amsterdam, up to the Baltic Sea, and across Lithuania.

Lunch in Le Club class was surprisingly inedible; fine by me, as I had no appetite.

That's partly because I was on my own, in both a literal and figurative sense, unprotected by diplomatic immunity:

If caught out as an illegal deep-cover spy by the KGB, my friends at the FBI would deny any connection to me.

Furthermore, the Russian legal definition of spying is purposely vague, and stickier than flypaper on a humid day:

Twenty years' imprisonment is their going rate for espionage.

I carried with me a pocketful of ideas to extend my relationship with Edward Lee Howard beyond his business with National Press Books.

Indeed, it had been determined by the U.S. Attorney's office that a rendition of Howard should not involve National Press, but stem from a new project I would propose.

So I sipped a quarter-bottle of champagne and made a meal of Time and Newsweek.

As we descended, my mood lightened. A sunny summer day in Moscow, clear skies.  The fields and lakes looked appealing from on high.

As we landed and taxied to a terminal, I looked out my window to see Aeroflot aircraft everywhere, sleek and attractive on the outside.

Like Russia itself, the truth lay beneath the surface:  Loose seats, missing life vests; disarray and deteriorating infrastructure.

Armed soldiers watched as we new arrivals negotiated drab corridors, down a flight of stairs to baggage collection, a total madhouse.

I hadn't checked any luggage, so I aimed myself at Customs.

But Green was closed.  So I took my place in one of two very long lines for Red.

"Do you speak English?" I asked the guy in front of me.

"Why is Green closed?  I have nothing to declare."

"You'd have even more trouble if Green was open.  They'd detain you for having so little money.  I saw this happen once."

I was only ninth in line at Customs, but it took 30 minutes to reach Mrs. Potatohead, who stamped and re-stamped my documents in quadruplicate.

Free of airport bureaucracy, I looked around for Edward Howard, but he found me, coming up from behind, whispering my name.

I shook his outstretched hand.

We made our way to Howard's powder-blue 1987 Volvo station wagon with Russian tags:  T9415MK.

The odometer registered 52,000-plus miles, but this rusty old vehicle had matured way beyond its physical age and mileage.

Howard climbed behind the wheel and fastened his seat belt.  "Mind if I smoke?" he asked.

"Not at all."  I paused.  "I'm staying at the Radisson.  No offense or anything, nice of you to offer your apartment, but I prefer a hotel and the services that go with it when I travel."

"Okay. The Radisson's good," said Howard. "I recently joined their health club so I'm there three times a week.  It also houses the International Press Club, which I just got into." 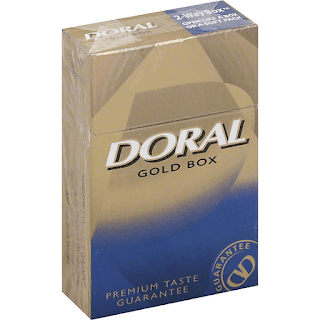 "Yeah."  Howard dragged on his Doral cigarette and started the car.  "It's open to journalists, writers, and heads of business.  So I thought, what the hell, I've got my own business.  I went in and they accepted me.  It's kind-a funny because the U.S. Embassy is on its board!"

Watching Howard's hands, I noted his school ring  (a poignant moment for me, he's still American whatever the hell he says) and a Rolex wristwatch with stainless steel bracelet.  His fingernails were bit to all hell.

"I tried to get a photograph of him for my book," said Howard.

As if any such a pic had relevance to his book.

"I stood watching outside Lyubianka when he visited," Howard rambled on. "But he didn't stop to talk to reporters, he rushed straight in. Later I found out why: his visit upset a lot of hardliners.  So he was asked to keep a low profile."

My sense of Howard at this point: Off-kilter.

Howard struggled against other motorists to merge onto a main road.

"That's the mentality here," he commented, shaking his head.  "Beat out the next guy."

"Is that a Muscovite trait?" I asked.

"No, it's a Russian trait.  I don't like these people.  And they've even worse to do business with.  Things are changing too fast here." Howard coughed, an incessant catarrh-like hack from smoking.  "Used to be, everything was based on Party privilege.  Now everything is based on money.  If you've got dollars, you can have anything you want."

Howard seemed disgusted by this concept, not least because all he possessed had come through Party privilege from crossing over.

"Not that I was ever in love with communism," he added.  "It's just that people here aren't used to this.  Look at all these cars." He motioned with both hands at the bumper-to-bumper traffic grid-locked around us.  "There never used to be this many cars around.  People had money, but they couldn't buy a car without the right contacts and getting on a list. It took 15 years to buy a car.  Now anyone with money can buy one.  And what do you get?  Traffic."

"Things are pretty ridiculous in the States, too," I said.  "You've been away a long time, Ed.  You're probably not familiar with all the political correctness going on.  Real estate agents can't even use terms like great view any more because it may offend blind people."

And The Dickster said he didn't have a sense of humor...

"I've lived half my life overseas, Ed," I said.  "You begin to see the U.S. through a different light.  You ever think of going back?"

Howard grimaced.  He rubbed his crooked boxer's nose. "I could beat the espionage charges.  It's all the other stuff they could put me in jail for:  inter-state flight, taxes..."

"Yeah, uh-huh.  I went to see a tax advisor about the amnesty they're offering for overseas Americans. I was told I could take advantage of that.  It's the state tax in New Mexico that worries me."

I could scarcely believe my ears.  This fugitive, wanted for espionage, was worried that he hadn't paid his taxes.

Plus he was under the erroneous impression that he should have been paying state tax all these years. I pointed out that as an overseas American, he had liability only for federal income tax, with an exemption of the first $75,000 of earned income.

Taxes aside, was there no deal that could be made for his voluntary return?

"Alan Sultan thinks it would be great publicity for your book," I offered.

"If they'd just try me for espionage and drop all the other crap, I'd come back," said Howard.

"Who would you deal with?" I asked.

"Have you had offers to deal?"

"Yeah.  I got a fax over a year ago saying they wanted to come to Moscow to talk to me."

"Well, I had phoned an FBI guy named John H.  I'd met him in Stockholm before the Swedes let me leave.  I guess the fax was a result of that."

"I faxed back asking for an agenda."

They faxed me saying they wouldn't give me an agenda."

"Nothing," said Howard.  "My KGB contacts said 'Why bother?'  So when the FBI didn't give me an agenda I never faxed back."

"Screw the KGB," I said.  "They have a vested interest in you staying here.  If this guy [John H] wants to come to Moscow to talk, what have you got to lose?"

"It's just boondoggle," said Howard.  "Those guys like taking trips.  They'll come all this way not to deal."

"You've still got nothing to lose," I said.

"Yeah, yeah, I guess it's worth thinking about.  But I don't think the Russians would be too happy."

"Screw the Russians, man.  It's yourself you've got to worry about." 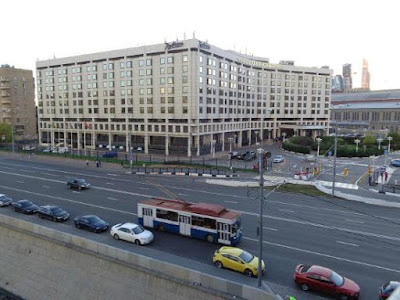 Howard steered into the Radisson-Slavyanskaya's forecourt.

For a new luxury hotel, it was ugly as sin.

Howard circled twice before nipping into a space vacated by another vehicle.

As we approached the hotel entrance by foot, Howard said, "The Russians think I'm crazy for including ***** [code name for the Black Box] in my book."

"Because they say the CIA is going to kill me for that."

"Yeah," said Howard.  "But the CIA may be doing the same thing in other countries today, current applications of the same technique."

Howard stood next to me at the check-in desk while a clerk accessed my reservation.

"I'll put you a long way from noisy renovations," said the clerk.

The clerk fingered his keyboard. "Can I have your passport?"

"No good," I said. "I'm leaving early in the morning.  Can't you just photocopy it?"

"No," said the clerk. "You need a receipt for Customs when you leave Russia."

Howard made faces. "What crap!" he erupted seconds later. "Foreigners stay in my apartment all the time and never show their passport!"

The clerk shrugged. "I get it back to you tonight." He took my passport, issued me a key.

Howard remained in the lobby; I ascended to the sixth floor, found my way to room 6056, adjacent to noisy renovations.

I opened the door.  Twin beds.

No logic to Moscow.

I emptied my head, scribbling notes about my conversation with Howard in handwriting so illegible, I could barely make sense of it. Poor penmanship is much less incriminating than encryption.

Posted by Robert Eringer at 6:41 AM