37. EDWARD LEE HOWARD ON WHY THE KGB DID NOT RESCUE ALDRICH AMES 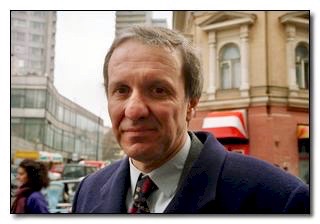 
After emptying my head of notes while inside my Radisson hotel room, I descended to the lobby to reconnect with Edward Lee Howard.

We drove to Howard's office so he could check on incoming faxes.

Howard told me his wife and son would arrive in Moscow five days hence and stay a month.  They wanted to visit St. Petersburg, he said, so he intended to accompany them and play tour guide.

"How are you able to maintain your marriage like this?" I asked.

"It's tough," said Howard.  "Mary and I see each other at Christmas and during the summer. I don't ask her questions and she doesn't ask me any. It's what you'd call mature love."

"And when she's here, it's as if nothing has changed?"

"That's right. My in-laws are coming, too," Howard added.

"Everything's cool with them?"

"It's okay now.  At first they didn't want Mary to see me again. It took some time. But we got over the emotional difficulties. I've got their support. And that's the main reason I want this book written. I just want my side of the story out there where my family can see it. Then I can move on."

"We have a good relationship. We had a long talk when he was eleven, after he found a copy of the David Wise book. Lee knows I'm not a spy. I'm a political refugee."

I told Howard that National Press planned to submit his manuscript to the CIA for review.

"They have to," I said, "to protect themselves from accusations of receiving and publishing classified material."

"I see." Howard was displeased by this news, not least because he anticipated, correctly, that the CIA would try to freeze all monies due him, and likely succeed.

Traffic had slowed because twelve large crates of bottled beer had fallen from a truck in front of us.

Cars veered around the mess; some motorists jumped out of their vehicles to loot the few bottles that lay unbroken in the street.

A half-mile later, Howard parked and we crossed the street to his office, which was housed within a yellow cinderblock structure. "I'm in a medical building," said Howard. "It's cheap."

We walked through an unlocked front door.

A few yards on, first door on the left, Howard keyed a single lock and we entered.

The drab, two-room office was illuminated by dim wattage. It reeked of stale tobacco. Cigarette smoke had permeated the carpets, the furniture, and stained the walls brown.

Howard checked for faxes. None.

"Who are your clients these days?" I asked.

"Some Germans, Swedes. A Spaniard.  He paid for me to meet him in Vienna last month."

"So you manage to travel a bit?"

"How do you find clients?"

"Through advertising.  I started with the International Herald Tribune, but that was terrible.  I only got people who wanted to sell me things. The Economist is best."

Howard re-locked his office and we walked down the road to a Tex-Mex restaurant called Santa Fe.

"They've only been open four months but doing pretty well," said Howard. "It's a good thing we're eating early. It'll be packed later, with a line to get in."

The maitre’d sat us with menus printed in English, priced in U.S. dollars.

I ordered Heineken; Howard, a tonic.  He lit another Doral and chained his way through dinner:  beef fajitas for him, a chicken sandwich for me.

"Your book is going to need some new hooks," I said.  "So let's talk about that now."

"First. Your knowledge about Russian spies inside the U.S. Government beyond Ames."

"There are plenty of them," said Howard.

"Okay, let's expand on that. Start with the American who tipped you off about your wife cooperating with the FBI during your secret trip to the U.S. in ‘86.  Where would he have worked to gain access to the documents he showed you?"

"Probably the Justice Department," said Howard. "The KGB showed me psychological studies that had been prepared by the U.S. government saying that I was suicidal.  That would have been CIA."

"To convince you not to take the trip."

"Uh-huh," said Howard. "I guess that's possible.  But I went, and they helped me with false documents and re-entry."

"Speaking of Ames," I said.  "Why didn't the Russians rescue him?  They must have known he was under investigation."


"Yeah, they knew he was in trouble," said Howard. "Last September, one of my KGB contacts, a man named Batamirov, showed me a picture of Ames when we were at a restaurant on the river.  He asked me, 'Do you know this man?'  I said I didn't.  I should have known then something was going on.  They knew Ames was in trouble."

"So why didn't they exfiltrate Ames?" I asked.  "Like the Brits did with Oleg Gordievsky?"

"They could have," replied Howard. "It would have been very easy. The KGB wanted to get him out. It went up to [President] Yeltsin for approval and he shot it down."

"Because it would have been too sticky politically," said Howard. "Look, when there was a $400 million aid package for Russia working its way through Congress, some Congressman tacked on a rider saying it was contingent on the Russians giving me back!  Yeltsin didn't want another one like me messing up aid packages.  It was more politically expedient to let Ames get caught than bring him here, where'd he'd become a major political and economic issue.

"And I'll tell you something else about Ames," continued Howard. "He wasn't the incompetent fool they made him out to be in the American press. My KGB contacts say he was a brilliant spy, very professional."

"You wrote in your manuscript that your KGB friends cracked out the champagne when Ames was caught. Why would they celebrate the loss of such an important agent?"

"You have to understand," said Howard, "these guys have been bashed away at for five years. It boosted their morale to be seen to have put one over on the CIA."

I asked again about Russian spies inside the U.S. government.

"Look," said Howard. "We have thousands of intelligence officers around the world whose job it is to recruit spies.  So does the KGB.  With all those people, and a big budget, do you think they don't recruit anyone? If they didn't, the money would stop.  Of course they have spies everywhere. When I was living in Sweden, my KGB contacts told me in advance everything that was coming down on me.  They said, You're about to be detained and arrested.  They knew!  I'll tell you, Igor Batamirov, the man Dick Cote met?  He was Ames's handler."

As Howard chewed beef fajitas, he confirmed for me what he had told the Dickster:  His book was the KGB's idea.

I ordered a second Heineken; Ed, another tonic.  The restaurant had begun to fill up, mostly expatriate American businessmen.

"In the old days," said Howard, "I had a little book, and in it were special vouchers and phone numbers for getting seats at the Bolshoi [ballet] or anywhere else in Moscow."

"You don't have that any more?"

"No one does," Howard griped.  "Everything is money now."