A brief pause from intrigue & lunacy to mourn the death of Ernest Hemingway, who killed himself 59 years ago tomorrow.

Ernest Hemingway was once the most famous writer in America.

He was born in Oak Park, Illinois, in 1899, and died by his own hand in Ketchum, Idaho.

Papa, as Hemingway came to be known, was only 62 years old when he killed himself.

I was not quite seven at the time.


Eschewing reading assignments at school, I finally got to know the works of Hemingway in my early 20s when, as a freelance foreign correspondent for The Toronto Star (Papa’s old newspaper), I immersed myself in his short stories and foreign dispatches.

Then in early 1989, while living in Monaco, I visited Paris and found myself in The Hemingway Bar at the back end of Hotel Ritz on Place Vendome. 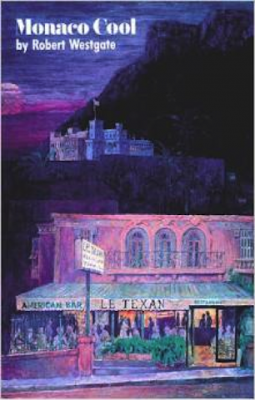 As I wrote in Monaco Cool...

"The Hemingway Bar is a cozy den where Ernest, in his ritzier years, had a drink and probably reminisced about his poorer, happier years in Montparnasse. On the bar is a bronze bust of old Hem looking smug.

"For the full experience I ordered the Hemingway Cocktail, a concoction of orange juice, whiskey and Drambouie, served in a martini glass with crushed ice and a maraschino cherry at the end of the toothpick. It wasn't bad. But it wasn't worth $13, especially after the bartender admitted this drink had nothing to do with Papa. While in Paris he favored the classic  dry martini.

"I wandered up Rue de la Paix to Place L'Opera. They say if you sit outside Cafe de Paix long enough you'll see half the people you know. Probably the half you tried to forget about. I stood a safe distance away, watching the people-watchers, before cutting into Harry's Bar for a classic dry martini." 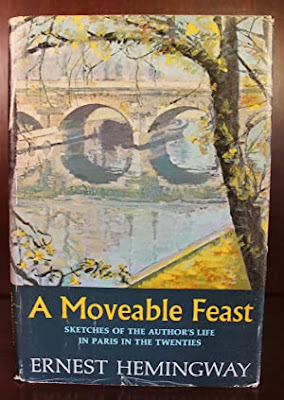 During that visit, I grew enamored of the Hemingway legend, especially after picking up a copy of A Moveable Feast at Hemingway’s favorite Paris bookstore, Shakespeare and Company, and savoring each page.

Several years later, in Key West, Florida, I was again, awed by the cult of Hemingway.

Sloppy Joe’s, where Papa drank and swapped fishing tales, had made Hemingway their favorite son, his bearded likeness branded upon everything from sweatshirts to coffee mugs.

I toured the Hemingway Home and Museum, maintained exactly as it was when Papa ate, slept and wrote his way through the 1930s.


It was at the end of the "Dirty Thirties," in 1939, that Hemingway found Idaho.

He did not so much discover it himself as get invited to the grand opening of the Sun Valley Lodge, whose construction marked the creation of America’s first ski resort.

Woo Hollywood and literary celebrities with free food and board; use them as bait to lure jet-setters who would normally gallivant to ski resorts in Europe.

Hemingway discovered that he liked Idaho.

He found it the perfect hideaway from a boisterous life.

Hemingway appeared in Sun Valley, not with his wife, Pauline, whom he would soon divorce, but with a young journalist named Martha Gelhorn, who he’d met at Sloppy Joe’s and would soon marry.

The royalties had dried up from previous books and the novelist needed to get serious about his writing.

The Sun Valley Lodge gave Papa room 206, and this is where he wrote For Whom the Bell Tolls. 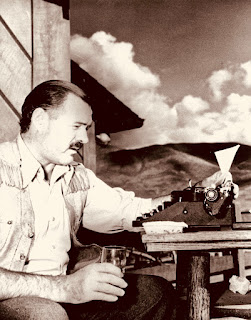 The author’s photograph on the back of the original hardcover shows Hemingway on the open-air terrace of room 206.

Hemingway was enchanted by the quietude of Ketchum, and he especially loved its autumn.

He returned in 1940 and again in 1941, departing just before the entry of the United States into World War II, much of which he spent in Cuba where he created an intelligence network (angering the FBI's J. Edgar Hoover) known as The Crook Factory.

During Papa’s early visits to Sun Valley, he mostly stayed at the lodge, always in room 206, a "parlor suite" he liked to call Glamour House.

His main home was Finca Vigia, 15 miles outside of Havana. 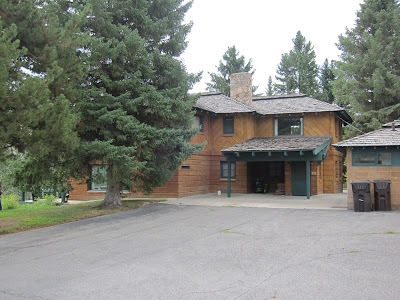 He chose Ketchum, moved there in 1958, and bought the old Heiss House.


It was here, in the foyer, that Hemingway blew his brains out with a double-barreled shotgun on a quiet Sunday morning, July 2nd, 1961.

Electro-shock therapy at the Mayo Clinic had erased the part of Papa's mind that knew how to write.

And without the ability to write, without what he called his "think machine," life, for Hemingway, was no longer worth living.

Posted by Robert Eringer at 6:37 AM