And that's because every night is a full moon at the Bedlam Bar.

The bar area is called The Department of Mood Enhancement, and the bartender offers free counselling to those in need, encourages group therapy among barflies (no TV) and dispenses alcohol-based remedies at discounted prices during Mad Hatter's Happy Hour.


Van Stein painted a prototype for the logo: 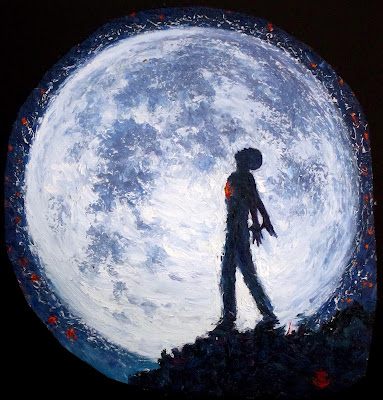 (The full moon links to lunacy and lunatics, luna being Latin for moon; those blessed with madness become restless during a full moon.)

Some involved in the project find this logo spooky; they do not quite (at first) grasp the concept (Don’t suffer mental illness, enjoy it) so we settle on a different design, incorporating the full moon with a pair of statues that once graced the arched entrance into Royal Bethlem Hospital at Moorefield’s, east London, by a Dutchman named Cibbius. Life-size male nudes, one named Raving, the other, Melancholy.

(Royal Bethlem is the world's first and oldest mental hospital.) 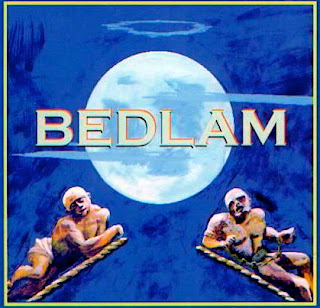 Back in the 1600s, mental illness was divided into "raving" or "melancholy."

Hence our logo:  a cloud halo over full moon, winged by Raving and Melancholy, creating a subtle angel of the universe.

Six renowned institutions, dominated by Royal Bethlem, are spread throughout our bar mural, each with its own sense of place. 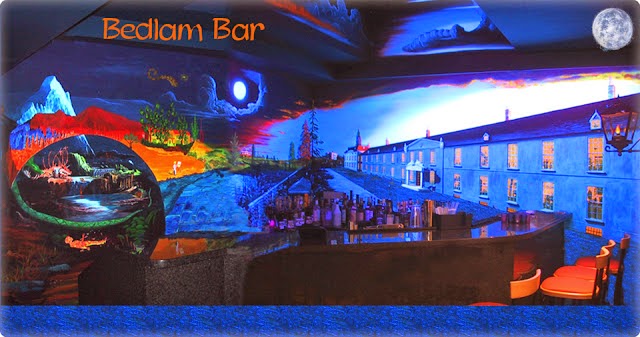 A bottle of champagne is promised to any customer who can name them all. (No one ever does.)

The Klepp Psychiatric Institute from Iceland.

MacLean.  The best known mental institution in the United States, located in Belmont, a suburb of Boston.  This is where James Taylor wrote Fire and Rain and was the setting for Girl, Interrupted.

The Priory, Southgate, north London, where my brother lost his taste for alcohol, became an expert on the subject of addictions, and made a new set of friends.

Tricky Dick’s.  Precursor to the Bedlam Bar.  A late-night coffee house I ran with my brother in the mid-1970s, the looniest of the lot.  (Patients included Bronco John, Burned-Out Paul, Coughing Abdullah, and folk singer Tim Hardin.)

A surreal Bosch-like ice age on the lower left (home to the Kleppur) depicts freezing cold water and a snake, symbolizing the treatment of mental patients centuries ago (especially in Germany), when patients were lowered slowly into snake pits or hosed with ice cold water.

Why such barbaric treatment?

It was believed such “therapy” would shock melancholy catatonics to their senses.

Walt Freeman, the lobotomist, is commemorated within the mural, ice pick in hand, as is Philippe Pinel, a Frenchman who revolutionized the care of mental patients in the late 1700s.

Pinel, as Keeper of the largest French asylum, Bicestre, removed the shackles and decreed that the insane should engage in conversation as therapy.

Nearby, an icon of St. Dymphna, patron saint of lunatics, for whom a blue candle always burns.


On another wall, Jonathan Winters’s two drawings are framed with an autographed photo of himself sitting with me inside the Montecito Bar, and this inscription:  “Bedlam and Breakfast for Two.” 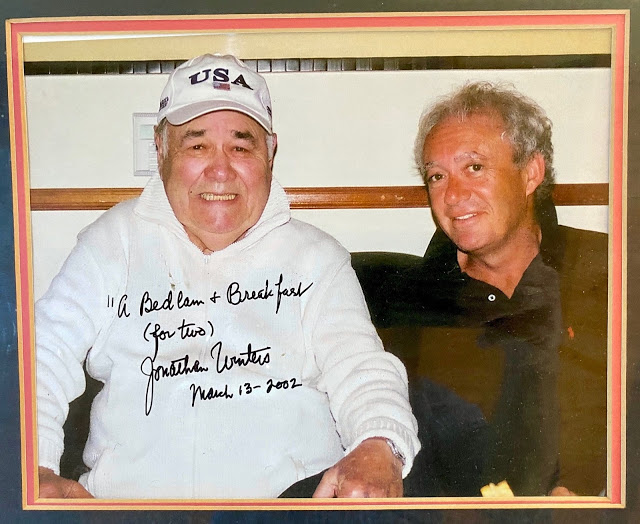 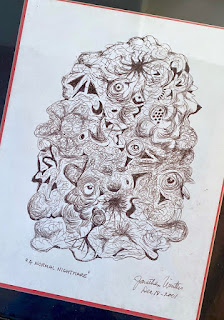 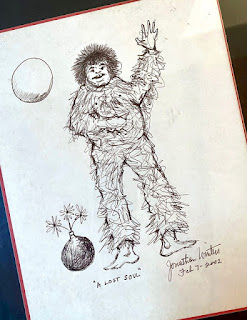 Clubhouse on Wheels: FEAST OF THORRABLOT: SHRINK-WRAPPED, LOOKING FOR A LABEL

A genuine straitjacket is mounted to the wall.

And a framed kazoo, accompanied by this instruction:  In case of emergency, break glass. 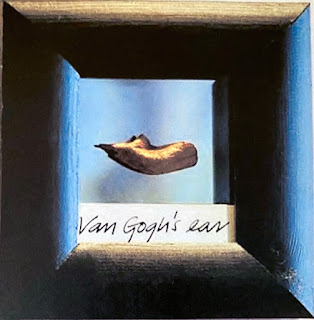 And Vincent van Gogh’s severed ear, framed and bolted to the wall. 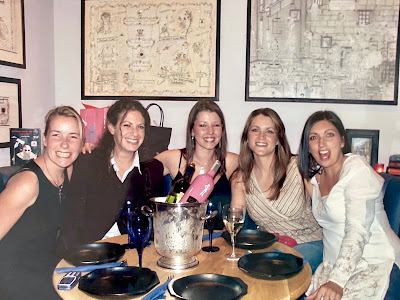 Around a banquette hangs original artwork by Charles Bronson, declared criminally insane in 1978 and considered Britain’s most dangerous prisoner: electrifying art that reflects his unique reality, having resided, at one time or another, in the criminally insane wing of every prison in England.

On another wall:  A Hall of Lunacy features expressionist portraits by Papa Duke of Van Gogh, Dali, Nietzsche, and Rasputin. 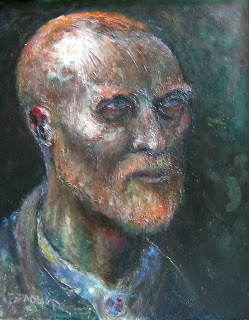 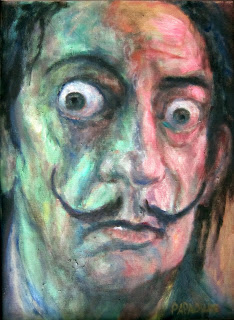 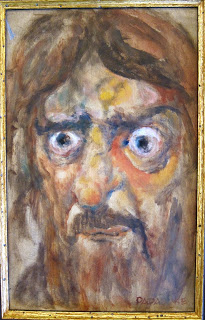 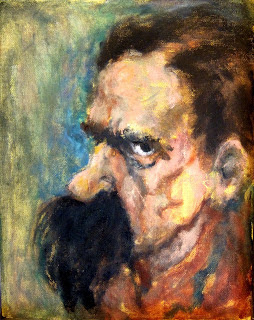 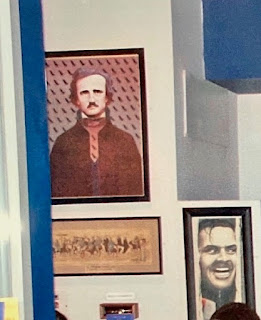 Jack Nicholson from The Shining and a portrait of Edgar Allan Poe, which the artist painted while a student at college, earning him a degree. 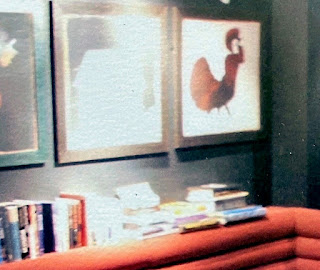 A modest library with titles including The Discovery of the Art of the Insane, Gracefully Insane, DSM-IV Made Easy (The Clinician’s Guide to Diagnosis), and my personal favorite, I Knew 3000 Lunatics, a 1935 book by Victor R. Small about his internship at an American east coast asylum.

Orange is the color of insanity, appeals to one and all as a unifier; blue compliments orange and triggers tranquilizer hormones.

For background music, the score from One Flew over the Cuckoo’s Nest–and anything by Brian Wilson. 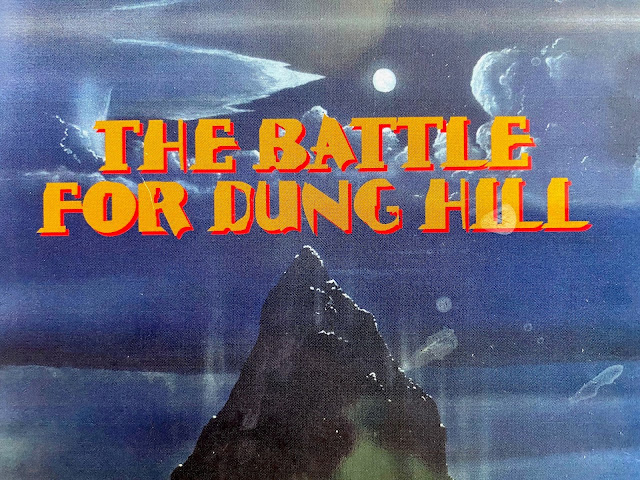 Greeted at the door by a mural of Colonel Crappeur, gents enter The Battle for Dung Hill, whereby two armies of poops–the French Foreign Faeces and Nerdy’s Turds–face off over who can claim Dung Hill, amid flatulent sound effects.

(Said one genuine Bedlamite, a witty dramatist named Nathaniel Lee:  “They said I was mad, and I said they were mad, and damn them, they outnumbered me.”)

Our menu is called Ideas of Reference, and it offers this encapsulated history:

Three hundred years ago, aristocrats and tourists would pay an admission to observe and question the “poor lunatikes.” be entertained by raving Bedlamites.


The word Bedlam has come to mean a state of mindless chaos.

It points out that one in four British people will experience mental illness at some point in their lives. 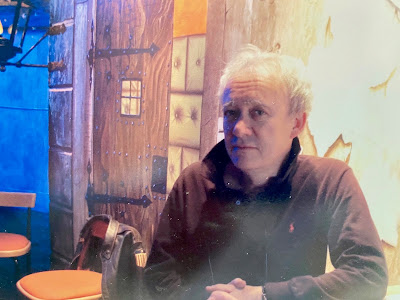 I greet customers myself and astonish them on a walking tour through the history of madness.

Everyone inevitably asks, What ever compelled you to think of this?


This would be a "third place" that gladly suffers fools, but particularly welcomes artists, writers, musicians, bohemians, eccentrics and lunatics.

When the neighbors complain, our strategy is to drive them mad; if taken to court, we plead insanity.

You’re already committed (so you might as well have dessert), says the menu.  Prove you’re certifiably nuts and it’s free!  (Letter from Dr. Riddlebollox required.)

In keeping with Royal Bethlem’s strict policy of distinguishing between the mentally insane and the feebleminded (who were not admitted) our offer does not extend to idiots, imbeciles and morons.

As we are trying to build a radiation shield to thwart the prying ears of Big Brother, the use of cell phones is not only permitted but encouraged (and may be monitored by management).

When we are closed, this sign on the door:

Clubhouse on Wheels: FEAST OF THORRABLOT: PART ONE